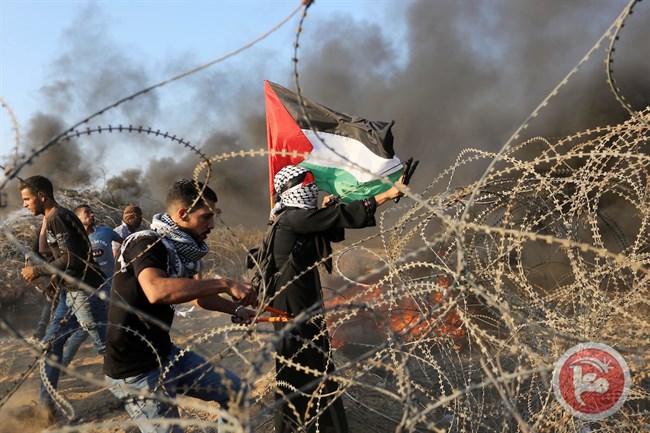 JERUSALEM (Ma’an) — Amnesty International (AI) said, on Friday, fears of escalating bloodshed are rising ahead of planned protests in the besieged Gaza Strip, on Friday, after Israeli authorities announced a “zero tolerance” policy towards demonstrations along the Israeli-Gaza border fence.

After an overnight five-hour meeting, the Israeli Security Cabinet instructed the Israeli army “to gradually exacerbate its retaliatory actions to violence along the security fence and to demonstrate a zero-tolerance approach.”

Although Israeli Prime Minister Benjamin Netanyahu instructed the Cabinet ministers not to discuss decisions made with the media, the Israeli Minister of Construction, Yoav Galant, addressed the recent escalation in Gaza and said “I can explicitly say that the rules of the game are about to change.”

However, the exact details of what “zero tolerance” entitles has remained unknown, causing many to fear that it will lead to more Palestinian deaths and casualties along Gaza’s border.

Amnesty International called on the Israeli government to rein in its armed forces, which have routinely used unnecessary or excessive force during Gaza’s weekly “The Great March of Return” protests.

Saleh Higazi, the Deputy Director for the Middle East and North Africa at Amnesty International, said “Given Israeli forces’ horrific track record of using deadly force against Palestinian demonstrators in Gaza, as well as journalists, medics and others, the announcement of a ‘zero tolerance’ policy is deeply alarming.”

Higazi stressed “There are serious fears that this policy will further sanction the use of deadly force against unarmed protesters during today’s demonstrations, and that Israeli forces will be given carte blanche authorization to carry out large-scale, unlawful killings escalating the bloodshed. Israel has repeatedly used lethal force unnecessarily and excessively against unarmed protesters in shameless violation of international law.”

Hundreds of protesters gather for “The Great March of Return” protests every Friday, which have taken place since March 30th, demanding the lifting of the nearly 12-year Israeli siege on Gaza and the return of Palestinian refugees to their homeland, today known as Israel.

Since the protests began, more than 150 Palestinians have been killed, including more than 30 children, and thousands of others have been injured.

According to Hebrew-language news outlets, Palestinian protesters will have to remain farther away from the Israeli-Gaza border fence, otherwise Israeli forces will open fire, in addition to that incendiary kites and balloons launched from Gaza will be met with “greater force.”

Higazi added “It is now time the international community shows ‘zero tolerance’ towards Israel’s flagrant contempt for Palestinian lives and disregard for its obligations under international law.”