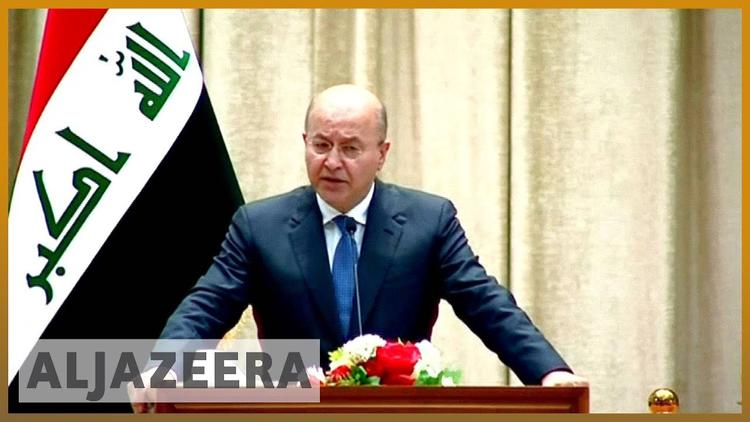 Ann Arbor (Informed Comment) – Shiite politician Adil Abdul Mahdi has been appointed prime minister by new Iraqi president Barham Saleh, bringing to a close months of gridlock in Iraqi politics after the parliamentary elections in June failed to produce a clear winner. Parliament in the past couple of weeks has finally been able to hammer out some compromises, having elected a Sunni speaker of the house who ran on a Shiite party list.

Adil Abdul Mahdi is a member of the Islamic Supreme Council of Iraq or ISCI (formerly the Supreme Council for Islamic Revolution in Iraq) and is the first post-2003 prime minister not to be from the largely lay fundamentalist Shiite party, the Da`wa (The Islamic Call Party).

The Da`wa was founded in the late 1950s, it is said, to combat the attractions of Communism and Baath Arab nationalist socialism for Shiite young people. Its leaders tried to imagine a Shiite paradise, with an emphasis on social justice, to oppose the Marxists’ Workers Paradise. It attracted a lot of middle class professionals– school teachers, attorneys, physicians, etc. Some of its leaders were clerics, but it was a largely lay party and even its clerical ideologues envisaged some sort of elected government.

The Supreme Council for Islamic Revolution in Iraq was founded in Tehran in 1982 at the suggestion of Ayatollah Rouhollah Khomeini, the clerical Leader of Iran. It is controversial, but Adel Abdul Mahdi is said by Aljazeera to have been one of the founding members in Tehran. He had become an expatriate in 1969 soon after the Baath Party coup, studying economics in Paris before going to Syria and Lebanon. As a young man he favored secular, socialist and Arab nationalist ideas and was friends with the secular-minded ex-Baathist Ayad Allawi. At some point Abdul Mahdi swung to the religious right and he has sometimes been lambasted as an opportunist, because he still seems relatively secular and pragmatic in outlook. ISCI says it has given up its Khomeinism, and now functions as a religious-right party in a parliamentary framework instead of pushing for rule by ayatollah.

Despite Abdul Mahdi’s pragmatism, he is from a party formed by Ayatollah Khomeini. Its militia, the Badr Brigade, has become a party in its own right, led by Hadi al-Ameri. Al-Ameri and the Badr coalition were among the parties that nominated Abdul Mahdi to Barham Saleh.

The bigger parties that won seats in the May elections of this year are these:

Abdul Mahdi will have to get 167 deputies for a simple majority in the 329 seat body. The Sadr/ Communist and pro-Iran Shiite militia blocs who nominated him give him 101. I think his predecessor al-Abadi’s Victory Coalition will back him, so that is 143. Ammar al-Hakim must be an old friend since he headed the Islamic Supreme Council and I’d guess he gets the National Wisdom Movement’s 19, for 162. Then usually the Kurdish parties go in with the Shiite PM, so that puts him well over.

But note that with the exception of the Forward Party (Reform Alliance), the parties that form the backbone of Abdul Mahdi’s prime ministership are strongly pro-Iran (al-Hakim was brought up in Tehran, and even the Kurds have good relations with Tehran). And Muqatada once pledged his own militia to defend Iran from any American attack.

Abdul Mahdi may even be able to form a government of national unity, which would be important, since Iraq needs to reincorporate the Sunni provinces now that ISIL is defeated. You need to cultivate a Sunni elite loyal to Baghdad or it looks like a Shiite (and Sunnis would say Iranian) occupation.

So I don’t want to be glib about this. Abdul Mahdi is despite his party allegiance a pragmatist and is not an Iran cat’s paw. But his government will inevitably have warm relations with Iran, and where they can, the Iraqis will buck the Trump administration in its push to isolate and boycott Iran. For one thing, Iraq is broke and can’t afford to boycott Iran, one of its bigger trade partners that has provided it with electricity in some provinces and offered use of its roads and ports.

More on the history of the Supreme Council: Khomeini had led a revolution against the king or shah of Iran, Mohammad Reza Pahlavi, in 1978-79. Clerics then gradually took over Iran. Khomeini called on the Iraqi Shiites, 60% of the population, to rise up against the Baathist, secular, socialist, Arab nationalist government. Saddam Hussein, who came to power in a putsch that year, outlawed the Da’wa Party in response. Thousands of Iraqi Shiites were deported to Iran or fled for fear of being executed if they had been activists.

Those thousands of Iraqi expatriates in Iran were the initial constituency for the Supreme Council for Islamic Revolution in Iraq.

Khomeini had developed an ideology that Shiite societies should be ruled by Shiite clerics, who because of their long seminary training are best positioned to figure out what policies God himself would like to see implemented. The Supreme Council initially adopted Khomeini’s ideology of clerical rule. Ibraham Jaafari and some others, who were not happy about this development, left Tehran for London and went back to being Da`wa members with a belief in laymen’s government.

During the Iran-Iraq War, the Supreme Council formed a paramilitary with the help of the Iranian Revolutionary Guards Corps, the Badr Brigade. In fact, I suspect Badr was on the Iranian payroll even after the US occupation of Iraq. In the 1980s Badr staged attacks on Baath targets in Iraq from its Iranian base, which were controversial, since Saddam had invaded Iran and they were at war. So some Iraqis felt as though the Supreme Council members were traitors.

In 1991 after the Gulf War, the Supreme Council organized a Shiite uprising in southern Iraq, which Saddam Hussein put down brutally, sending the Supreme Council into the political wilderness until it reemerged with a seat on the US-appointed provisional government in 2003.

Abdul Mahdi had been a serious candidate for prime minister after the first American-sponsored elections in 2005, which the Supreme Council for Islamic Revolution in Iraq and its Shiite coalition partners won. What I heard at that time was that the Iraqi political elite was afraid to have a prime minister from the Supreme Council because it had been formed under Iranian auspices and many of its leaders were Shiite clerics, and it would just be embarrassing to show up to the (largely Sunni) Arab League with that kind of delegation. So they put in Ibrahim Jaafari, a member of the more lay Da’wa Party, which was nevertheless somewhat fundamentalist.

I suppose you could say that Da`wa wanted an Islamic state but not a clerical one (as in Iran), and saw its ideology as compatible with parliamentary democracy as long as there was a Shiite majority that produced a largely Shiite government (which it has since 2003).