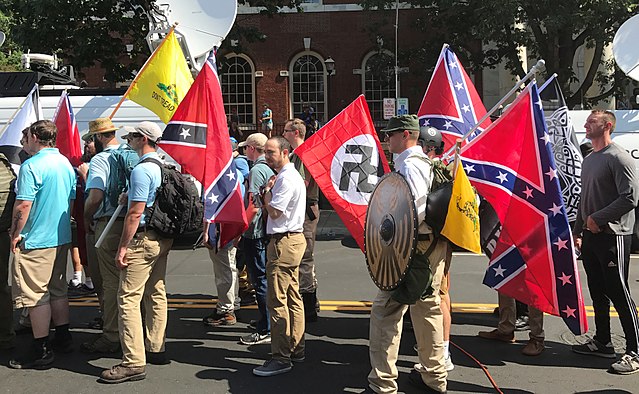 (Yes! Magazine) – Organized hate groups span all geographic areas of the United States, from White nationalists in Washington state to neo-Nazis in Alabama to radical traditionalist Catholics in New Hampshire. While persecution of classes of people happens everywhere, the drivers that push people to join hate groups are unique to specific places. In this way, hatred can be a study in geography as much as anything else.

A new model tracking organized hate groups upends a long-held, simplistic view of the issue, one that placed a generalized blame on education or immigration, for example, positing that a person’s education level could be a sole indicator of whether they would join a hate group.

New research from the University of Utah provides a much more nuanced picture of what gives rise to organized hate groups that can better serve those working to dismantle them. In the Midwest, economics is a more influential factor than immigration. On the East Coast, more religious areas correlate with more per capita hate groups, while education has little influence.

Richard Medina, University of Utah assistant professor of geography and lead author of the research, said public perceptions of hate and its motivating factors are often oversimplified. “Drivers of hate are dependent on regions and cultures and all the things we see and study in geography,” he said. “It can be really complicated. People don’t just hate for one reason.”

Medina’s group had been working on the research before the White supremacist rally in Charlottesville, Virginia, in August 2017, where a woman was killed in the violence. Emily Nicolosi, University of Utah graduate student and co-author of the paper, said that what happened in Charlottesville started national conversations she believes the research can support.

“The motivators and drivers of hate look very different in different places,” Nicolosi said. “If you look at the maps, you can see that these sort of regions emerge where the [different] variables are playing the same role.”

The research used census data to track specific socioeconomic variables, such as population changes over a five-year period, poverty, and education levels. Researchers mapped population percentage of White non-Latinos because places changing from strong racial and ethnic similarity are more likely to experience a negative reaction to change. Poverty is a driver of hate because extremist groups promise the impoverished a way out of financial difficulty or provide a group to blame. The group also measured conservative religious and political ideology.

The maps of these socioeconomic factors were then compared to a 2014 map of 784 organized hate groups across the country that the Southern Poverty Law Center created.

The hate groups were mapped down to the county level in each state. The states with the most hate groups per million people in population were Montana, Mississippi, Arkansas, and Vermont. Comparing the socioeconomic map with the hate group map showed which factors were the strongest indicators in different regions of the country.

In general, the research reveals that less diversity, more poverty, less population change, and less education all correlate with more hate groups. But how influential those factors are depends on where you live.

On the West Coast, high poverty and a large concentration of White people in an area are the most influential factors driving hate groups. While the region generally has racial diversity, non-White people moving in and changing a demographic quickly can become targets, Medina said. In the southern parts of California and Arizona, lower education levels and higher poverty levels are the most important indicators.

In the central United States, economic factors—such as poverty and employment levels—are most likely to push people into hate groups. Immigration is less of a factor because fewer people are moving into the region compared to the coasts.

Population shift is the most telling factor on the East Coast. Areas with more people leaving than coming have more hate groups. This trend is also present throughout the country, Medina said, but is most prominent in the East. Rates of education, poverty, and diversity have less influence there.

This mapping reveals what fuels different biases, Nicolosi said. Movement organizers working for social justice must recognize the most important factors in their own communities to create positive change.

Politicians can better understand their constituents and the cultures influencing them, Medina said.

How to change minds

Citing research such as this, Medina said creating interactions with people from different races, religions, and places is one of the most effective strategies to combat organized hatred.

And that is what Peace Catalyst International does, creating opportunities for interaction and relationships between Christians and Muslims in both the United States and Indonesia. City by city, the group brings together people from different religions, organizing meals and group discussions. The dynamics of each city or region play out differently, so local organizers must respond accordingly.

Rebecca Brown, grants manager for Peace Catalyst International, said Christian communities often struggle to overcome misconceptions and fears about Muslims they have internalized from American culture. Islam is often portrayed as a violent religion in American media. According to the Pew Research Center, non-Muslim Americans are more likely to have positive feelings about Islam if they know a Muslim. But studies show non-Muslim Americans are more likely to know someone who is atheist, Jewish, or Mormon than someone who is Muslim.

People can be transformed by one relationship, Brown said. “The xenophobic, anti-Muslim threat is a very real threat and a growing threat in our community,” she said. Her organization wants to “provide viable theological and ideological ways for [people] to cling to peace rather than … moving toward fear.”

“[Hate] is not uniform. But people treat it like it’s a uniform phenomenon across the country.”

Similar to the work Peace Catalyst International does, Life After Hate helps create relationships across ideological divides. The organization was co-founded by Christian Picciolini with a mission of researching extremism and helping radicalized people disengage from hate movements.

The birth of his son and interactions Picciolini had with customers in his record shop pushed him away from the hate movement. “A gay couple came in with their son, and it was undeniable to me that they loved their son in the same profound ways that I loved mine,” Picciolini said in his talk. “Suddenly, I couldn’t rationalize or justify the prejudice that I had in my head.”

Picciolini underscores the importance of the research findings. The most effective way to change a radicalized person’s view is to understand what is driving their prejudice, Picciolini said in an interview with the Southern Poverty Law Center. “It’s about changing their perspective just a little bit,” he said. “Because often when you change their perspective just a little bit, it allows them to see the cracks in the foundation of the ideology that they believe in.”

Both extremism research and the rush to understand and combat organized hate groups are happening at a time when technology is helping to target potential recruits. Hate groups use similar strategies as ISIS or al Qaeda, focusing on individuals who feel victimized or isolated. Hate groups tap into beliefs that racial or religious groups are attacking Whites, as seen in a Ku Klux Klan recruitment flier distributed at a North Carolina high school in 2017. An appeal to religious conservatism is an effective tactic in North Carolina, Medina said, though playing off a fear of losing one’s culture is used across the country.

The research begins to offer a measurable picture of where in the country different types of messaging will attract members. And Medina would like to investigate further, for instance, the roles that specific religions play; the current study groups all religions together. He also plans to work with researchers who will do qualitative studies to learn about motivations directly from citizens.

“[Hate] is not uniform. But people treat it like it’s a uniform phenomenon across the country. It just doesn’t work that way.”

Correction: October 2, 2018
This version updates Christian Picciolini’s title. The Life After Hate co-founder left his role as director before this article was originally published.

Wyatt Massey wrote this article for The Mental Health Issue, the Fall 2018 issue of YES! Magazine. Wyatt is a journalist covering social justice and religion. Follow him on Twitter @News4Mass