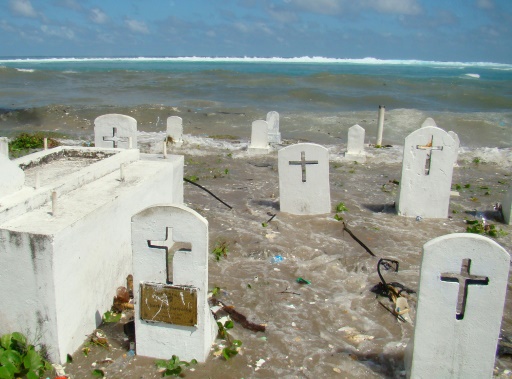 Ann Arbor (Informed Comment) – It strikes me as darkly humorous that we, the most intelligent species ever to have evolved on earth, homo sapiens (evolved circa 190,000 years ago), were so clever that around 1750 we started burning so much wood, coal and later on oil and natural gas that we started changing our own climate so much that it may threaten our survival. And, in a new scientific report, scientists’ hair is on fire, and they are warning us as vehemently as these polite researchers know how that we have to be net zero carbon by 2050, and we have to jump on getting there RIGHT NOW, during the next decade. Or else, Very Bad Things will happen.

We have to go to war, folks. This challenge is like when Hitler took over all of mainland Europe and the US geared up to go defeat him. The climate crisis is also a genocidal maniac.

The IPCC report says that if we push the global average surface temperature of the earth up only by about 2.7 degrees F. (1.5ºC), it will be *much* better than if we push it up to 3.6º F. (2º C.) or more (and it can go up 10 degrees F. if we really want it to). Remember, we are talking about an average increase of 3.6 degrees F. That includes the surface of the oceans, which is cold, and the two poles, etc. So in Alabama or Arizona, it will be *way* more than a 3.6 degrees F. increase.

The IPCC says that coral reefs would decline by 70 – 90 percent with global warming of 2.7 degrees F., whereas virtually all (more than 99 percent) would be lost with a 3.6 degrees F. increase. Coral reefs are where fish hide from predators and multiply and feed. They also help protect coasts from storm surges. You need coral reefs way more than you know and it is better NOT TO KILL THEM ALL.

Here is a graphic from Carbon Brief that shows the difference: 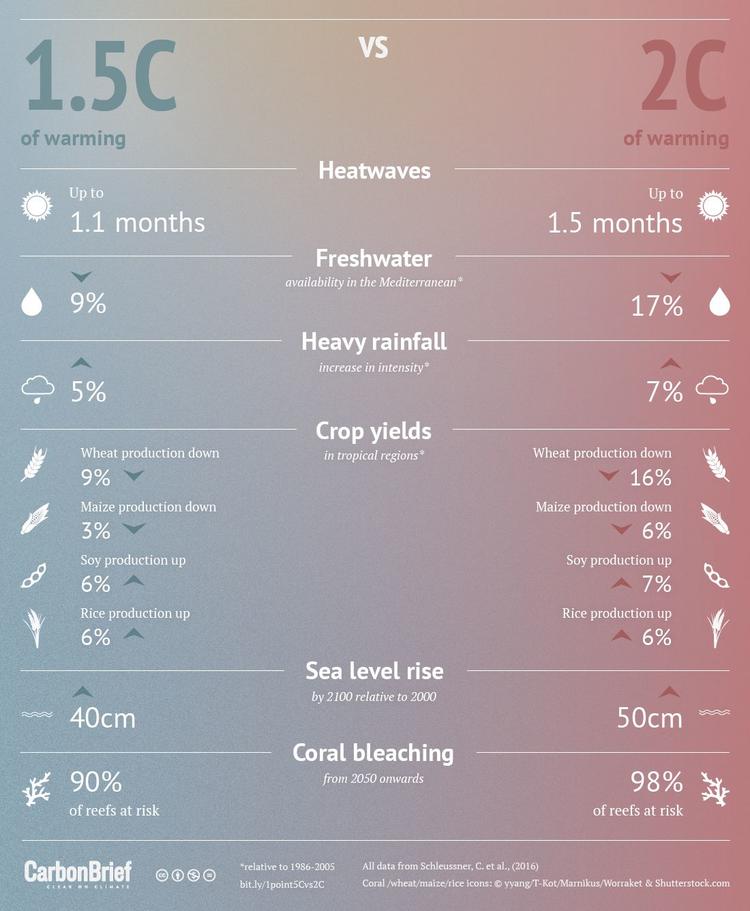 The IPCC press release says, “Every extra bit of warming matters, especially since warming of 1.5 ºC or higher increases the risk associated with long – lasting or irreversible changes, such as the los s of some ecosystems,” said Hans – Otto Pörtner, Co – Chair of IPCC Working Group II.

We still have the opportunity to shape our climate future (and if you love that toddler in your life you’d better try). But some change has already been built in, since we put the parts per million in the atmosphere of carbon dioxide (CO2) up from 170 ppm to 410 ppm since 1750, and CO2 is a powerful heat-trapping gas. We are on track to go on up to 600 ppm of CO2 and maybe more if we go on drive gasoline cars and generating our electricity with coal. In my state, Michigan, 37% of our electricity still comes from coal, which is a crime against humanity and against the earth. Natural gas is now cheaper than coal and is replacing it, but burning it puts CO2 up there, too. Only 8 percent of our energy is renewables, for which our supposedly high-tech governor Rick Snyder and AG Bill Schuette are directly responsible, since they are in the back pocket of big oil.

The earth gets heat from the rays of the sun striking its surface, but a great deal of that heat just radiates back off into outer space. Some gases, like methane and carbon dioxide, if they are present in great amounts in the atmosphere, stop the heat from radiating away, and keep it on earth. That is why Venus is a boiling hell where lead runs in streams on the surface–it has *a lot* of carbon dioxide in its atmosphere. We’re not in danger of making ourselves Venus, but we could give the whole world a sweltering tropical climate with mega-storms and big time sea-level rise that will submerge a third of the land mass and make civilization much more difficult. 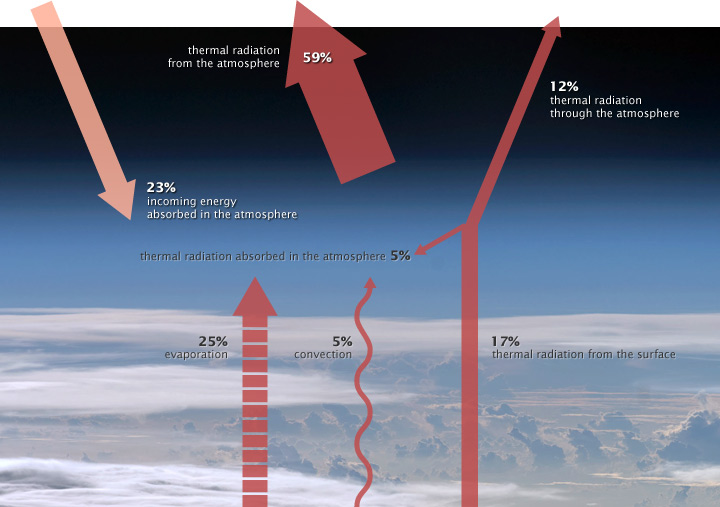 It isn’t so hard, folks. And it isn’t expensive. It will actually save us all massive amounts of money.

Above all, elect Green politicians. Government has the levers necessary to make things happen quickly.

If you can, take public transportation to work.

If you have to drive and can afford one, get an electric car as your next vehicle. They aren’t expensive any more. The average transaction price in the US this year for light vehicles is $35,000. There are EVs that start at $22,000. If you can afford more, you can get a Chevy Bolt or similar for $35,000 and can deduct $7,500 from your taxes, so it gets down into the $20ks. The Bolt has a range of 250 miles on a charge and has great pick-up. A lot of cities have free electric stations in parking lots so that your fuel is free.

If you are a homeowner, put solar panels on your roof. They’ve come down *a lot* in price. If you combine panels with an electric car, you get free fuel for the car and a much reduced electric bill and pay off the panels in about 6 years. After that the free electricity is cream. My average summer electricity bill with solar panels is like $14 a month. If you are going to be in your house more than 10 years, you are costing yourself money by not having solar panels.

Give up eating beef. (Chicken and other fowl, and fish are o.k.)

As individuals, most of our carbon footprint is electricity and transportation. But we have to take collective action. If you are a renter, propose panels on top of the building to the landlord. Try to get electric charging stations in your parking lot. Lobby your city and state to put in pro-green legislation. As consumers, we should be buying from corporations that aren’t polluting, like IKEA, rather than from ones that do. Look it up before you go shopping.

Students should lobby their universities. I am ashamed to say that my own, the University of Michigan, has no significant plans to reduce its over 600,000 tons of CO2 emissions annually below 500,000 tons any time in the near future. I doubt if more than 3% of its electricity comes from green sources. They greenwash this as a 25% reduction goal but it is a trick since it is based on 2006 after a huge run-up in emissions. The baseline should be 1990.

In contrast, the University of Hawaii and Stanford have plans to go 100% green on the timeline that the UN scientists recommend. The University of Michigan just raised $5 billion from alumni, and could easily get them to pay for a net carbon zero university.

If the intellectual cream of the country at a “Public Ivy” like Michigan can’t get off its duff and address the climate emergency with more urgency than this, then we almost deserve to go extinct.

The students at universities that drag their feet like this should be in the square protesting and screaming bloody murder. We geezers who are in charge of universities just have a prospect of milder winters in our retirement years, around the corner. You 20-year-olds are going to get slammed with the hurricanes and droughts and wildfires and sea level rise and ocean acidification that threatens sea life.

The IPCC report concludes with Things that Must be Done:

“some countries have adopted clean energy and sustainable transport while creating environmentally friendly jobs and supporting social welfare programs to reduce domestic poverty. Other examples te ch us about different ways to promote development through practices inspired by community values. For instance, Buen Vivir , a Latin American concept based on indigenous ideas of communities living in harmony with nature, is aligned with peace, diversity, solidarity, rights to education, health, and safe food, water, and energy, and well-being and justice for all. The Transition Movement, with origins in Europe, promotes equitable and resilient communities through low-carbon living, food self -sufficiency, and citizen science. Such examples indicate that pathways that reduce poverty and inequalities while limiting warming to 1.5°C are possible and that they can provide guidance on pathways towards socially desirable, equitable, and low-carbon futures.”

This Vox article has useful graphics for seeing the difference.

Featured Photo: AFP/File / GIFF JOHNSON. A cemetery in Majuro Atoll is flooded during high tide in the low-lying Marshall Islands, a Pacific atoll chain that sits barely a metre above sea level.