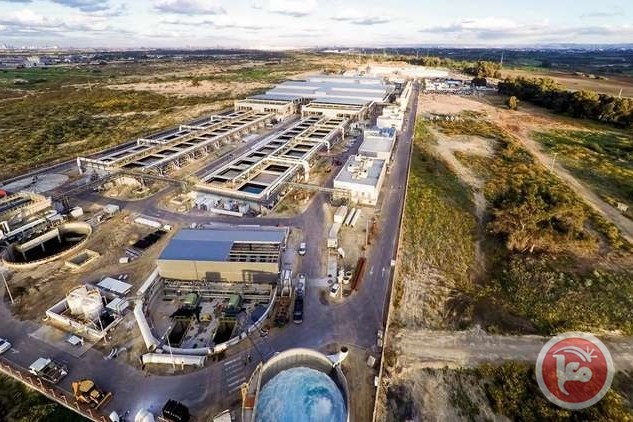 JERUSALEM (Ma’an) — The Israeli Ministry of Finance announced that it had received bids from seven various groups to build the world’s largest desalination plant, which will be able to produce about 200 million cubic meters of water per year.

The ministry said, in a statement to the Reuters news agency, that the tender is for a new desalination plant in the area of Sorek, in central Israel.

Sources added that there is another desalination facility that already operates at the same site.

It is expected that when the new facility comes online, Israel’s array of desalination plants will be able to supply 85% of total household and municipal water use in the country and would produce about 200 million cubic meters of water per year.

Israelis, including settlers in the occupied Palestinian territory, have access to 300 liters of water per day, according to water rights NGO coalition EWASH, while the West Bank average is around 70 liters, below the World Health Organization’s recommended minimum of 100 liters per day for basic sanitation, hygiene and drinking.

According to Amnesty International, nearly 200,000 Palestinians in the West Bank do not have access to running water.

Meanwhile, just half of Palestinian proposals for wells and improvement projects to the water network were approved by Israel between 1995 and 2008, compared to a 100 percent approval rate for Israeli projects, according to a 2013 report by Palestinian human rights group Al-Haq.

The Palestine Liberation Organization (PLO) affirmed in a statement earlier this month that “since 1967, not a single new well has been approved by Israel in the Western Aquifer,” adding that wells built by Palestinians without Israeli-issued permits were extremely vulnerable to demolition at the hands of Israeli forces.

“As the occupying power, Israel has very specific obligations toward the land and population it occupies. Unfortunately, Israel not only fails to fulfill these responsibilities, which are obligations under customary international law, but in fact continues to exploit Palestinian natural resources in the territory it occupies,” the PLO statement read.