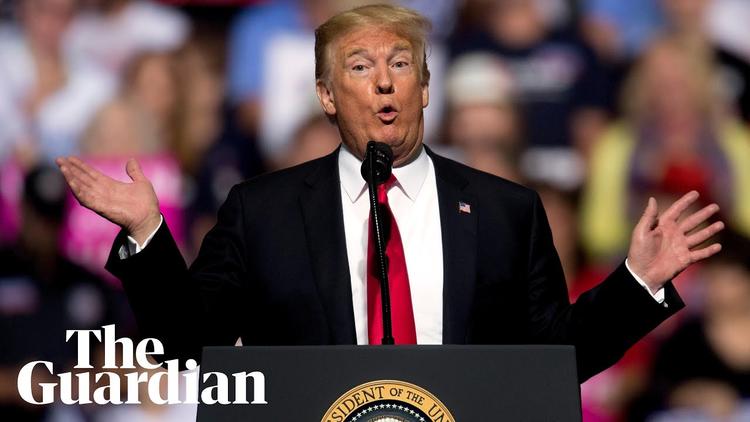 Ann Arbor (Informed Comment) – The genre of the Hollywood Romantic Comedy has fallen on hard times, in part because it became so formulaic (and unrealistic). Trump, however, is attempting to revive it with some twists. You throw a few atomic bombs in, make it part thriller and part P. T. Barnum circus act, and you’ve Made the Romantic Comedy Great Again (MRCGA). Except you can’t really say MRCGA. It would sound like you were throwing up. Oh wait . . .

Speaking at Wheeling, W. Va., Trump told his audience that “there was once tough talk ‘back and forth’ between him and North Korean leader Kim Jong Un . . . He added,

“He wrote me beautiful letters and they’re great letters. We fell in love.”

Judd Apatow or Seth Rogan *has* to make this film. Oh, wait, Seth can’t do it since he already killed off one of the protagonists. You’d have to reboot with a whole new producer and director. It’s like the next Avenger movie where they didn’t really all die.

You can imagine the treatment.

He’s a secretive tinpot dictator with an equally bad haircut who has female ninjas poison his enemies at airports.

SCENE: The two are in their gaudy silk bathrobes in a Trump penthouse, staring daggers at one another.

“You called me Rocket Man! I’m not a cartoon. I rule 25 million people with an iron fist.”

“I’ll talk however I like. Enemies of ours like you are working with bloodshot eyes to infringe upon our dignity, sovereignty and vital rights. If we push the buttons to annihilate the enemies even right now, all bases of provocations will be reduced to seas of flames and ashes in a moment!”

“Get out! Get out! I never want to see you again.”

CUT TO: Kim Jong Un bored in his presidential palace, playing a video game involving nuking the other players. He sets off numerous explosions, recalling the end of Dr. Strangelove, but in color and with Ramstein playing in the background. He throws the control at the wall. “It’s too easy! They always let me win! The seas of flames and ashes come too fast!”

“I want to nuke something real. I am tired of games!”

“Is that really the problem? There are tears in your eyes. You are missing him.”

“I don’t need anyone! I have Bugattis. I have as many golden toilets as he does!”

“But do you have a friend?”

Kim Jong Un stares at her in realization.

“You are lonely. Let me write him a letter for you.”

“Love is always strong, never weak. Here, let me write: “If you come back to me after many years/ ‘I forgot you not’ is my answer to your fears.”

IVANKA: “Dad, you’re usually psyched after a rally in a cow pasture in West Virginia. You seem down”

“I’m not missing anyone! Do you know how many whor– I mean, friends, I have? Besides, I want to nuke something. Why the hell do we have all those nukes if we can’t use them?”

“Dad, don’t be too proud to reach out. It’s like when Angela Merkel used to hate you and then you refused to shake her hand.”

“She still hates me.”

“DHL special delivery from Pyong-Yang.” OPENS ENVELOPE. “Oh, it is the most beautiful letter.”

CUT TO BEACH RESORT. Kim Jong Un and Trump frolic on the beach, holding hands with Playboy bunny Karen McDougal, who is between them and looks uneasily from one to the other. The men wear speedo swimsuits love handles bulging and clearly priapic.

KAREN: “You guys said that the devil’s triangle is just a drinking game, right?”

Occasionally watching them from a beach towel are Kim Yo-jong and Ivanka, who are reading each other love poetry. They turn to each other eagerly.

Guardian News: “‘He wrote me beautiful letters and we fell in love’: Donald Trump on Kim Jong-un”