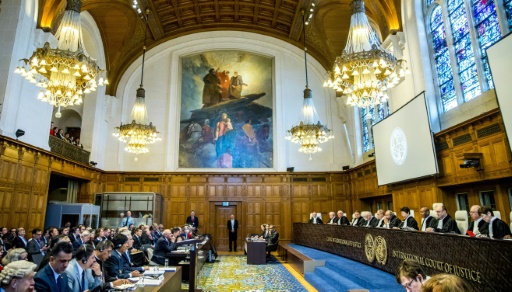 The Hague (AFP) – The United States will confront Tehran at the UN’s top court on Monday over billions in frozen assets, in a case that could deepen the Trump administration’s rift with international justice.

Iran had dragged Washington before the International Court of Justice in June 2016 to oppose a US Supreme Court ruling that the $2 billion should go to victims of terror attacks blamed on the Islamic republic.

Monday’s hearing of US objections against Iran’s appeal comes a week after the ICJ in a separate case ordered the United States to ease sanctions reimposed after President Donald Trump pulled out of the 2015 nuclear deal with Iran.

Both the assets and the sanctions cases are based on a 1955 “Treaty of Amity” between Washington and Tehran that predates Iran’s Islamic revolution.

Last Wednesday the Trump administration announced it was not only tearing up the 1955 treaty but also that it was quitting the international accord relating to the UN top court’s jurisdiction.

It remained unclear how Washington will respond to the latest case before the court but US officials confirmed that its lawyers will be present at the hearing on Monday.

The ICJ was set up after World War II to rule on disputes between United Nations member states. Its rulings are binding but it has no power to enforce them.

At Monday’s hearing a 15-judge bench is to listen to arguments by Washington’s lawyers over whether the ICJ can take up the case under its strict rules governing its procedure.

The US Supreme Court ruled in April 2016 that $2 billion in Iran’s frozen assets must go to American victims of terror attacks.

These included the 1983 bombing of a US Marine barracks in Beirut in which 241 soldiers were killed and the 1996 Khobar Towers bombing in Saudi Arabia. In total the decision affects more than 1,000 Americans.

Iran angrily accused Washington of breaking the 1955 treaty — even though it was signed at the time with the pro-US regime of the Shah — and called for the US “to make full reparations to Iran for the violation of its international legal obligations.”

Tehran said that because the US has maintained its designation of Iran as a major state sponsor of terrorism, its assets including the Central Bank also known as the Bank Markazi, have been “subjected to enforcement proceedings in the United States” even if they should benefit from immunity under the 1955 treaty.

A decision by the ICJ’s judges could take weeks or even months before being made public.

Iran won a shock victory last week when the ICJ ruled that the US must lift sanctions against Tehran targeting humanitarian goods like food and medicine.

In response, US Secretary of State Mike Pompeo said the United States was terminating the 1955 friendship treaty.

But Trump’s national security advisor John Bolton also announced that the United States was pulling out of the 1961 Optional Protocol and Dispute Resolution of the Vienna Convention.

The protocol establishes the ICJ as the “compulsory jurisdiction” for disputes unless nations decide to settle them elsewhere.

The step also comes after the Palestinians went to the ICJ to challenge the US move of its Israel embassy to Jerusalem.

Trump last month at the United Nations virulently rejected the authority of the International Criminal Court — a separate court based in The Hague that the US is not a member of — over a probe into US forces in Afghanistan.

Featured Photo: ANP/AFP/File / Jerry Lampen. The International Court of Justice (ICJ) in The Hague was set up after World War II to rule on disputes between United Nations member states. Its rulings are binding but it has no power to enforce them.

Jan Hennop is AFP correspondent in the Netherlands. His reporting has also appeared in Yahoo, France 24, Business Insider, MSN, and Sidney Morning Herald.