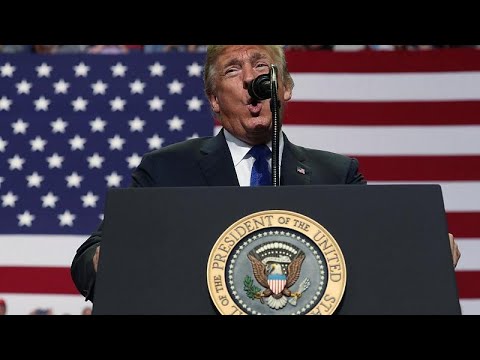 Ann Arbor (Informed Comment) – Trump, speaking at a rally in Mississippi on Tuesday night, went out of his way to humiliate Saudi King Salman, his close ally in his attempt to corral Iran.

“We protect Saudi Arabia. Would you say they’re rich? And I love the King, King Salman. But I said,

‘King – we’re protecting you – you might not be there for two weeks without us – you have to pay for your military.'”

By “your military” Trump apparently meant the US army, navy and air force, which has often protected Saudi Arabia, as during the Gulf War when the US military spearheaded pushing Saddam Hussein out of Kuwait, which he had invaded, and from which he could have menaced Riyadh as well. Some 80% of the cost of the Gulf War was shouldered by US allies, especially Saudi Arabia, Kuwait and other Gulf states. Saudi Arabia alone pitched in $16.8 billion.

It is this sort of thing, where the Gulf paid the US to provide security to it, that Trump seems to have in mind. Only, the Gulf War was a particular episode, whereas Trump seems to want to levy a standing tax on Saudi Arabia for providing a security umbrella.

Trump had spoken by phone with King Salman last Saturday, apparently continuing to strong-arm him to increase OPEC production quotas so as to flood the market and cause oil prices to plummet.

Likely, Trump is hoping that if people’s gasoline costs are much reduced in October, they might be grateful to the Republican Party for it and produce a Red Wave.

Oil prices had hit $86 a barrel on the Brent Exchange this week, but both Russia and Saudi Arabia were alarmed by this heating up of the market and have apparently secretly decided to increase output so as to calm things down.

I do not think this decision had anything to do with Trump’s histrionics. Some 5% of new cars registered in California are electric, and the Chinese bought some 600,000 EVs last year. Very high oil prices could stampede consumers into the electric vehicle market even faster than falling EV prices and public policy are already doing. Oil probably will be largely worthless and may even be outlawed within 20 or 30 years, but Russia and Saudi Arabia have an incentive not artificially to shorten that timeline to 10 or 15 years, which $100 a barrel oil and US gasoline prices of $3.50 and $4.00 a gallon would potentially do.

Ironically, Trump himself contributed to higher oil prices by organizing a boycott on Iranian oil, taking several hundred thousand barrels a day off the world market at a time of increasing demand and of turmoil in Venezuela and Libya.

Saudi Arabia has been doing very well with the higher oil prices (which had often been in the $40s /barrel after 2014). Its GDP is $734 billion a year, and it only has a population, counting 8 million guest workers of about 30 million. Trump is being driven crazy by these statistics, though he isn’t taking into account the cost of the ongoing development of Saudi Arabian infrastructure and society (free education through the Ph.D. and free healthcare and very low government-back mortgages). And then of course there is the US-backed war on Yemen, which is surely bleeding billions in cash.

As for whether Saudi Arabia could defend itself without a US security umbrella, I suppose it would have difficulty against a much bigger Iran. The Saudis however have a very big military– 300,000 army troops and 600,000 active duty personnel, and it spends like $88 bn a year on this military (Iran spends on the order of $16 bn a year). Saudi Arabia’s air force could blow the Iranian one out of the air. But Iran’s population is 2.5 times that of Saudi Arabia and so it could certainly create a much bigger conscript army if it needed to. But anyway Iran hasn’t aggressively invaded another country for a very long time (it was invited into Iraq and Syria, and the number of Iranian troops in Syria is very small, though it helped recruit Afghan and other volunteers).

Diplomatic speech in the Gulf tends to be artificially respectful, and people on Twitter are outraged at Trump’s disrespect. Some are pointing out, though, that the Saudis are unlikely to react sharply to Trump’s shakedown, since they really do need Washington. They are contrasting Saudi silence here to the almost hysterical way the kingdom responded to Canada’s ambassador, who mildly criticized the jailing of women activists who had fought for the right to drive. Saudi Arabia cut off economic relations with Canada and pulled out 100,000 students from its universities. That won’t happen to Saudi-American relations.

EuroNews: “Saudi King would not last ‘two weeks’ in power without US support: Trump”