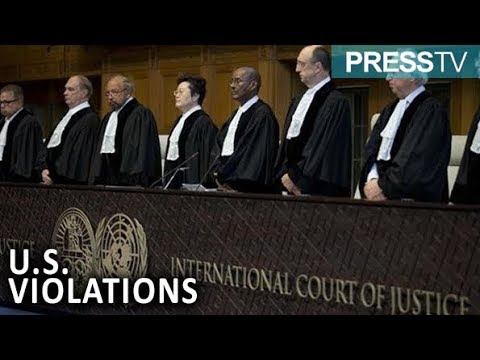 (TeleSur) – Iran brought a complaint to the ICJ on grounds that U.S. President Donald Trump’s sanctions violated the 1955 Treaty of Amity signed between the two countries.

On Wednesday, the International Court of Justice (ICJ) at the Hague issued a court ruling ordering the United States to remove sanctions imposed on Iran which affect humanitarian trade, food, medicine and civil aviation.

Iran brought a complaint to the ICJ on grounds that U.S. President Donald Trump’s’ imposition of sanctions — after the United States withdrew from the nuclear agreement — represented a violation of the 1955 Treaty of Amity signed between the two countries.

According to U.S. Secretary of State Mike Pompeo, Iran’s case is “meritless,” as the United States believes there are justified exceptions to sanctions imposed on Iran which affect its humanitarian trade and aviation safety. “I am disappointed the court failed to recognize its lack of jurisdiction.”

Furthermore, the secretary of state believes Iran is infringing on the United States’ sovereignty by bringing the case to the ICJ. “[Iran] has attempted to interfere with the sovereign rights of the United States to take a lawful action necessary to protect our national security,” Pompeo said.

Regardless of the United States’ opinions on the matter, the ICJ unequivocally stated that its ruling is binding and it can not be ignored. However, the court has no means to enforce the ruling which Washington has vowed to ignore, as is the case with a variety of international commitments and obligations which the current Trump Administration has disregarded and acted on unilaterally.

Press TV: “ICJ president calls on US to lift sanctions against Iran”