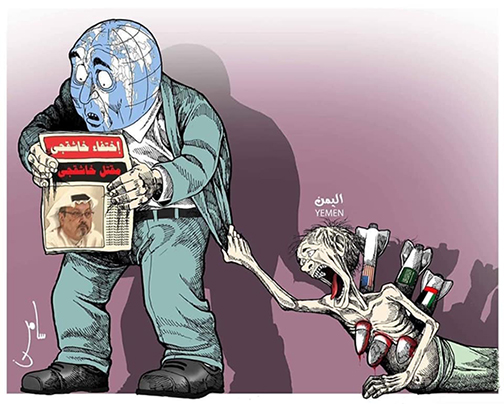 (MENA Tidningen) – For the past week, the news cycle on the Middle East has been focused, for obvious reasons, on the murder of the Saudi journalist Jamal Kashoggi in the Saudi consulate in Istanbul on October 2. Turkish authorities claim that they have hard evidence for the murder, which the Saudis are finding it increasingly hard to deny. The hired propaganda media of the Saudis are spinning a post-denial alibi of “rogue elements” to salvage the reputation of MBS as a great reformer. In this they are aided by President Trump, who would rather sell billions of dollars worth of weapons than reflect on the multiple human rights abuses of the kingdom. The Arab states who feast on Saudi money are, understandably in the Hobbesian sense, defending their royal oil daddies.

It is heart warming to see media coverage of such a brazen and brutal act. At the very least it draws attention to the “fake news” that Saudi Arabia is undergoing reform. The litany of abuses since the premature crowning of MBS shows how Saudi Arabia is run by a deformed, not a reformed, regime. Think about it. The much touted royal decree that now allows women, at least some women, to drive obscures the fact that the government has imprisoned the very women who protested for this right. MBS rounded up a bevy of Saudi billionaires who were not his cronies, imprisoned them in the Inter Continental and extorted them on the trumped up charge of corruption. This is from a prince who buys million-dollar yachts and French castles on a lark. President Hariri of Lebanon was summoned to the Saudi court and pressured to resign. Then there is the absurd boycott of neighboring Qatar, including the comedy of building a canal to make Qatar an island. And the list goes on.

The premeditated killing of Kashoggi deserves all the media attention it can get. But for the sake of the values that Kashoggi died defending, as a journalist critical of abuse in his own country, a similar spotlight needs to be placed on the ongoing Saudi/Emirati war in Yemen, which has created a desperate humanitarian crisis in which Yemenis are killed everyday. In an opinion piece for Haaretz, David Rosenberg reminds us of a statement attributed to the Soviet dictator Joseph Stalin that when one man dies it’s a tragedy, but when a million die it’s a statistic. “Khashoggi’s killing,” Rosenberg observes, “has reverberated around the world in a way that 17,000 Yemeni casualties did not.” If this war continues for three more months, warns Lise Grande of the United Nations, 12 to 13 million Yemeni civilians are in danger of starvation.

Statistics do matter and they are easily ignored. Most of the media still refer to the number of casualties in this war at 10,000, an estimate made by the UN over two years ago, but the true figure is much higher and no doubt far more than 50,000. The number of Yemenis facing starvation is almost half of the total population and the greatest burden will fall on children. This is not a new story. Reports from over two years ago pointed out how the war was harming Yemen’s children. If you can stomach the images of such suffering, just write “Yemen dead child” in Google search and look for yourself at the images too graphic for the mainstream Western news media. The majority of children have been killed by bombs dropped from Saudi coalition planes. The bomb that killed 40 school children last August was made in America.

For much of the war in Yemen the press has been silent, only occasionally mentioning it and hardly ever as a major story unless there is an obvious American connection that cannot be hidden. Western journalists have had a hard time getting access to the war zone, but that is only part of the problem. The Saudis hired PR firms that make it extremely difficult for journalists to report the atrocities in the war. It is telling that the selling of MBS as the great reformer has been pushed in American grocery stores by a glossy magazine, The New Kingdom, from the makers of the National Enquirer. This tired rag is one of the few media outlets that loves Trump. There is no mention in the MBS love fest of the suffering caused by the war against Yemen, a country that is simply branded as an Iranian terrorist threat.

The death of a journalist, especially in a war zone, is an attempt to suppress the truth about brutality. The murder of Kashoggi should warrant media attention, but what about the Yemeni journalists who have lost their lives due to all sides in the war? Since the violence started in 2014, at least 27 Yemeni journalists have been killed and many others imprisoned or forced to flee. Are the lives of Yemeni journalists less important than that of a journalist based in America? Recently ten journalists, nine of them Afghani, were killed in a bomb blast in Kabul, but where was the international outcry? Overall there are confirmed reports of 1323 journalists killed worldwide since 1992, but there are no doubt many more cases that do not make the list.

The present danger to journalism is the age-old maxim that the pen is mightier than the sword (an apt metaphor for Saudi Arabia’s capital punishment by cutting off heads). Perhaps this saying should be upgraded with the addition that tyrants still use the sword (or any other lethal weapon) to silence those who wield the pen. Rulers who are unable to literally get away with murder are keen to make the press into the enemy. No one today is more vocal about this than President Trump, who considers any negative news about him “fake news” and routinely refers to journalists as enemies. “Truth is not the only casualty in Trump’s media wars,” warns Simon Tisdall in The Guardian.Certainly Russia’s Putin and Philippines President Dutarte appreciate Trumps’ war on the media as they repress the very idea of a free press. North Korea’s Kim Jung-On is no doubt pleased to have an ally when North Korea is ranked dead last in the Reporters without Borders World Press Freedom Index. If there is any lasting lesson to be learned from the death of Koshoggi, it is the urgent need to counter the politically motivated war on journalism by unmasking all the attempts to deny oppression that suppresses the free press.

Featured Image by Samer, showing a starving Yemen pleading for the attention of the world.