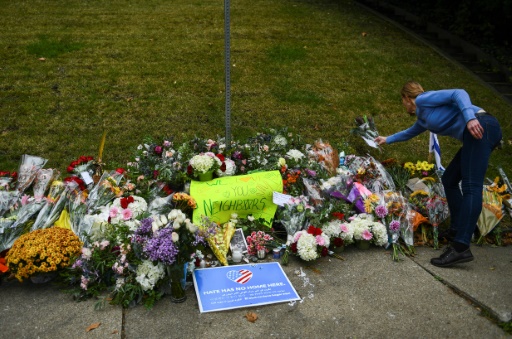 Washington (AFP) – A group of Pittsburgh Jewish leaders wrote an open letter to President Donald Trump Sunday telling him he bears responsibility for a deadly shooting at a synagogue in the US city.

A mostly elderly group of 11 people were gunned down in the bloody assault on the Tree of Life synagogue on Saturday morning by a shooter who said he “wanted all Jews to die,” while six more were wounded in the attack.

“For the past three years your words and your policies have emboldened a growing white nationalist movement. You yourself called the murderer evil, but yesterday’s violence is the direct culmination of your influence,” the open letter said.

It called on Trump to “fully denounce white nationalism,” to “stop targeting and endangering all minorities,” to “cease your assault on immigrants and refugees” and to “commit yourself to compassionate democratic policies that recognize the dignity of all of us.”

Until he does so, Trump — who has announced his intent to visit Pittsburgh — is not welcome in the city, the letter said.

The shooting, which has sparked an outpouring of grief and shock from American Jews, came just days after a pipe bomb was sent to prominent Jewish philanthropist George Soros, who has been the target of what many see as anti-Semitic conspiracy theories.

Such conspiracy theories, which accuse Jews of dominating government and finance, are rife among the so-called “alt-right” movement, which is supportive of Trump and has gained significant influence in recent years, including through the president’s former chief strategist Steve Bannon.

Featured Photo: AFP / Brendan Smialowski. In a letter to Trump, the group called on the US president to ‘fully denounce white nationalism,’ and ‘stop targeting and endangering all minorities’.