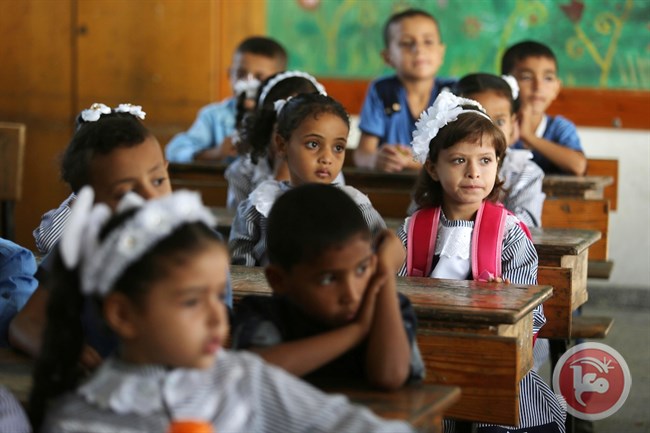 (Ma’an News Agency) – Several Palestinian students, along with teachers and officials, were wounded in the Israeli army attack on a school south of Nablus in the West Bank on October 15. The students of al-Sawiya al-Lubban Mixed School were challenging an Israeli military order to shut down their school based on the ever-versatile accusation of the school being a “site of popular terror and rioting.””Popular terror,” is an Israeli army code for protests. The students, of course, have every right to protest, not just the Israeli military Occupation but also the encroaching colonization of the settlements of Alie and Ma’ale Levona. These two illegal Jewish settlements have unlawfully confiscated thousands of dunums of land belonging to the villages of al-Sawiya and al-Lubban.

“The Israeli citizens,” that the Occupation army is set to protect by shutting down the school, are, in fact, the very armed Jewish settlers who have been terrorizing this West Bank region for years.According to a 2016 study commissioned by the United Nations, at least 2,500 Palestinian students from 35 West Bank communities must cross through Israeli military checkpoints to reach their schools every day. About half of these students have reported army harassment and violence for merely attempting to get to their classes or back home.However, this is only half of the story, as violent Jewish settlers are always on the lookout for Palestinian kids.

These settlers, who “also set up their own checkpoints,” engage in regular violence as well, by “throwing stones” at children, or “physically pushing (Palestinian children) around.””UNICEF’s protective presence teams have reported that their volunteers have been subjected to physical attacks, harassment, arrest and detention and death threats,” according to the same UN report.In other words, even the “protectors” themselves often fall victim to the army and Jewish settler terror tactics.Add to this that Area C – a major part of the West Bank that is under full Israeli military control – represents the pinnacle of Palestinian suffering. An estimated 50,000 children face numerous hurdles, including the lack of facilities, access, violence, closure and unjustified demolition orders.

The school of al-Sawiya al-Lubban located in Area C is, therefore, under the total mercy of the Israeli military, which has no tolerance for any form of resistance, including non-violent popular protests by school children.What is truly uplifting, however, is that, despite the Israeli military Occupation and ongoing restrictions on Palestinian freedom, the Palestinian population remains one of the most educated in the Middle East.According to the United Nations Development Program (UNDP), the literacy rate in Palestine (estimated at 96.3%) is one of the highest in the Middle East and the illiteracy rate (3.7% among individuals over the age of 15) is one of the lowest in the world.

If these statistics are not heartening enough, bearing in mind the ongoing Israeli war on Palestinian school and curricula, consider this: the besieged and war-stricken Gaza Strip has an even higher literacy rate than the West Bank, as they both stand at 96.6% and 96% respectively.In truth, this should not come as a total surprise. The first wave of Palestinian refugees that were ethnically-cleansed from historic Palestine were so keen on ensuring their children strive to continue their education, they established school tents, operated by volunteer teachers as early as 1948.Palestinians understand well that education is their greatest weapon to obtain their long-denied freedom.

Israel, too, is aware of this dichotomy, knowing that an empowered Palestinian population is far more capable of challenging Israeli dominance than a subdued one, thus the relentless and systematic targeting of the Palestinian educational system.Israel’s strategy in destroying the infrastructure of Palestinian schooling system is centered on the allegation of “terror”: that is, Palestinians teach “terror” in their schools; Palestinian school books celebrate “terrorists”; schools are sites for “popular terror” and various other accusations that, per Israeli logic, compels the army to seal off schools, demolish facilities, arrest and shoot students.Take for example, the recent comments made by the Israeli mayor of Jerusalem, Nir Barkat, who is now leading a government campaign aimed at shutting down operations by the UN organization that caters for Palestinian refugees, UNRWA.”It is time to remove UNRWA from Jerusalem,” Barkat announced early October.

Without any evidence whatsoever, Barkat claimed that “UNRWA is strengthening terror,” and that “the children of Jerusalem are taught under their auspices, terror, and this must be stopped.”Of course, Barkat is being dishonest. The jibe at UNRWA in Jerusalem is part of a larger Israeli-US campaign aimed at shutting down an organization that proved central to the status and welfare of Palestinian refugees.According to this skewed thinking, without UNRWA, Palestinian refugees would have no legal platform, thus closing down UNRWA is closing down the chapter of Palestinian refugees and their Right of Return altogether.

The link between the shutting down of al-Sawiya al-Lubban, the targeting of UNRWA by Israel and the US, the numerous checkpoints separating students from their schools in the West Bank and more, have more in common than Israel’s false allegation of “terror.”Israeli writer, Orly Noy, summed up the Israeli logic in one sentence. “By destroying schools in Palestinian villages in Area C and elsewhere, Israel is forcing Palestinians to make a cruel choice — between their land and their children’s futures,” she wrote earlier this year.It is this brutal logic that has guided the Israeli government strategy regarding Palestinian education for 70 years. It is a war that cannot be discussed or understood outside the larger war on Palestinian identity, freedom, and, in fact, the very existence of the Palestinian people.

The students’ fight for their right to education in al-Sawiya al-Lubban Mixed School is by no means an isolated skirmish involving Palestinian school kids and trigger-happy Israeli soldiers. Rather, it is at the heart of the Palestinian people’s fight for their freedom.