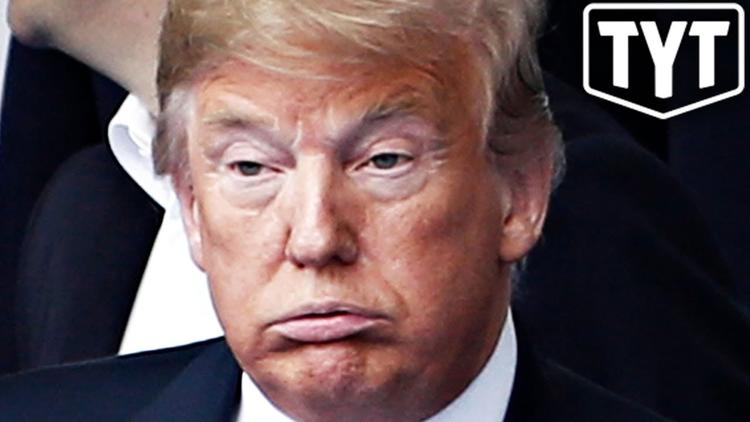 Trump’s statement on his policy toward Saudi Arabia in the wake of the murder in Istanbul of dissident Washington Post journalist Jamal Khashoggi brought a profound shame on the United States that will, as FDR put it, live in infamy. Trump began by saying he was putting America first, but that was the last thing he was doing. He was putting his own personal predilections and policies, and perhaps profit, above the interests of the United States. Here are the ways he put America last:

1. Trump did not wait for the final Central Intelligence Agency report on the Khashoggi killing, elements of which were leaked last Thursday. According to the Washington Post, the CIA has concluded that Saudi crown prince Mohammed Bin Salman ordered that Khashoggi be whacked. They have evidence that the prince’s brother, Khalid Bin Salman– the Saudi ambassador in Washington– helped lure Khashoggi to the Istanbul consulate by assuring him it was safe to drop by. By ignoring and putting aside the findings of professional investigators, Trump has weakened US security.

2. Trump admitted that the crown prince may be implicated in the murder: “Our intelligence agencies continue to assess all information, but it could very well be that the Crown Prince had knowledge of this tragic event — maybe he did and maybe he didn’t!” He went on to say that we will never know what happened at the consulate. But we do know what happened at the consulate, and after the murder one of the thugs said to another, “Let your boss know it is done.” The assassin team leader works for the crown prince. By openly admitting that it is possible that Bin Salman ordered the hit, but declining to take any action, Trump is announcing that the United States government just does not care if its allies use bone saws on US-based journalists working for the Washington Post. The US ought to stand for the first amendment, one of its high values that is admired around the world and which is essential to the functioning of American democracy. Trump has dishonored the Constitution.

3. Trump is unbearably transparent about the financial incentives for him to overlook Khashoggi’s murder. He makes up a completely ridiculous number for new Saudi purchases from or investment in the United States of $450 billion, of which he says $110 billion will “be spent on the purchase of military equipment from Boeing, Lockheed Martin, Raytheon and many other great U.S. defense contractors.” First of all, all that money Trump mentioned is vapor, with no reality. The supposed $110 bn in arms purchases are mostly non-binding memoranda of understanding, just expressions of interest. Second of all, arms industry investments produce very few jobs. Saudi money likely produces less than 20K jobs annually. Third of all, filling up the volatile Middle East with sophisticated, high-powered weapons makes the US less secure, not more. The Saudis use that fancy equipment they do buy to destroy countries like Yemen, where the al-Qaeda threat has grown, not receded, because of this chaos.

4. Trump is also clear that he is running interference for the crown prince for the sake of Israel and in order to keep together his coalition against Iran. But Israel would not need to suck up to bone saw murderers if it would make peace with the Palestinians and stop colonizing their land and keeping them stateless. As for Iran, the US had made an epochal settlement with Tehran that mothballed most of its nuclear enrichment program in 2015. Trump trashed that agreement and tried to put Iran behind the eight ball, cheered on by aggressive Saudis willing to fight Iran to the last drop of American soldiers’ blood. Trump created a potential conflict where the was none, and now has to consort with murderers because mafiosi need capos.

5. Trump gave as another reason to wink at Khashoggi’s murder and go on doing business as usual with Mohammed Bin Salman that Saudi Arabia is a key partner in fighting terrorism. The odd assertion frequently met with in Washington, DC, that Iran is the foremost font of terrorism and Saudi Arabia is a useful ally against terrorism is bizarre. Saudi Arabia backed the Bureau of Services in Peshawar in the 1980s, which mounted violence in Afghanistan and evolved into al-Qaeda under the Saudi Usama Bin Laden. (Riyadh and Bin Laden fell out in 1990). Saudi Arabia backed the Army of Islam group in Syria after 2011, which issued bloodthirsty screeds against Shiites and blew stuff up in Damascus and dismissed democracy. Some of the weaponry the CIA passed to the Saudis for Syrian rebels made its way to the al-Qaeda affiliate. Saudi Arabia in its war on Yemen has at times showed little concern about al-Qaeda in that country while concentrating on the Houthi rebels, who hail from a moderate Shiite sect. Saudi Arabia kidnapped the prime minister of Lebanon and attempted to force him to resign under duress. And Saudi Arabia murdered a Washington Post columnist with a bone saw in its Istanbul consulate. With allies like this, who needs enemies? As for Iran, it has acted not as a radical or terroristic force in the past couple decades in the Middle East, but as an enforcer of the status quo. Iran helped keep the Bashar al-Assad government in power and helped defeat al-Qaeda and ISIL in Syria. Iran helped defeat ISIL in Iraq and propped up the Baghdad government. Iran has helped assure that the Israelis don’t just steal southern Lebanon, which they tried to do 1982-2000. Iran has been one of the main pillars of counter-terrorism in the Middle East in the past two decades, at a time when the US has rampaged around bringing al-Qaeda into new countries, as in Occupied Iraq, and contributing to the rise of ISIL. Overlooking Bin Salman’s grisly act of murder on the grounds that Riyadh is needed for counter-terrorism and to block Iran is like everything else in Trump’s ‘statement’ an act of insanity.