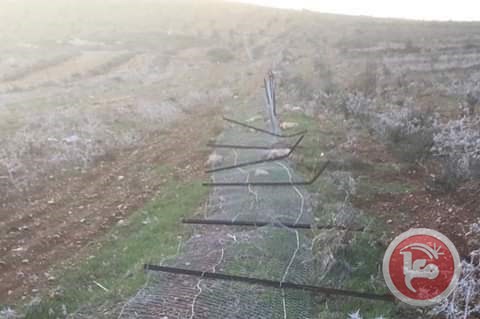 According to local sources, Israeli settlers under the protection of Israeli forces stormed the area and uprooted dozens of Palestinian-owned olive trees.

Sources added that following the uprooting, Israeli forces arrived to the area and claimed that they opened an investigation regarding the incident, despite the presence and testimonies of the locals and owners of the uprooted trees.

Israeli settlers constantly harass Palestinian farmers and residents in the village, in attempt to force them out of their lands, as part of an Israeli plan to expand illegal settlements nearby.

For hundreds of Palestinian families, olive trees are the main source of income, however when harvest season approaches, Israeli settlers target Palestinian lands and cause severe economic damages.

According to a report by Israeli NGO B’Tselem, Israeli settlers’ vandalism in the occupied West Bank is a daily routine and is fully backed by Israeli authorities.

B’Tselem reported that “In just over two months, from the beginning of May to 7 July 2018, B’Tselem documented 10 instances in which settlers destroyed a total of more than 2,000 trees and grapevines and burned down a barley field and bales of hay.”