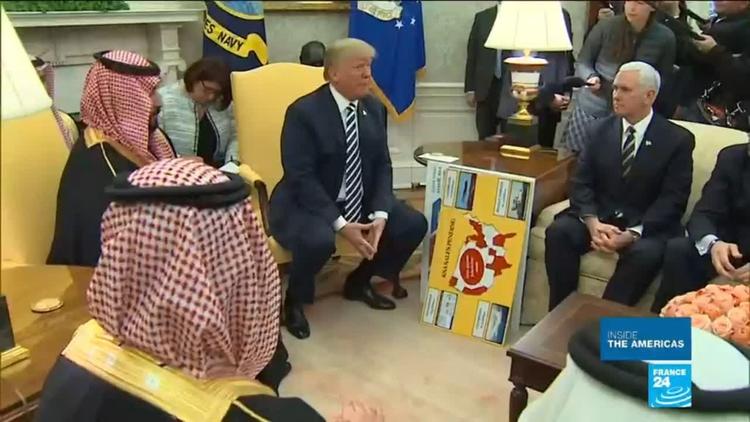 (The Conversation) – After weeks of ratcheting tension about who authorized the murder of Saudi journalist Jamal Khashoggi, President Donald Trump sought to put an end to the debate.

He issued a blunt public statement asserting that “we may never know all of the facts surrounding the murder of Mr. Jamal Khashoggi,” and instead he identified a much larger concern for the U.S.

Trump warned that Saudi Arabia is a key ally against terrorism and the “largest oil producing nation in the world.” Therefore, U.S. interests demand that it remain close partners with the Saudis.

Trump’s pronouncement met with widespread disapproval from both Republicans and Democrats as well as internationally.

But some foreign policy experts offer an alternative explanation. They maintain that the U.S. has a long history of allying itself with autocrats and dictators and Trump’s approach is not a drastic departure from existing U.S. foreign policy norms. Instead, Trump’s cardinal sin has been to state explicitly what had been understood implicitly.

As a former State Department official overseeing democracy and human rights programs, and now as a scholar of foreign policy and international relations, I believe this argument oversimplifies the complex relationship between interests and values in U.S. foreign policy over the last century.

Roosevelt the realist, Wilson the idealist

Since the start of the 20th century, U.S. foreign policy has vacillated between the “pragmatic realism” of Teddy Roosevelt and the “democratic idealism” of Woodrow Wilson.

For realists, international affairs is what scholar Jack Snyder calls a “struggle for power among self-interested states.” In contrast, liberalists or idealists believe that nations forge ties through trade, finance and shared democratic norms, leading to progress in relations between states.

It’s true that the U.S. has often thrown its weight behind tyrants and authoritarians. For example, President Franklin Roosevelt in 1939 allegedly said Nicaraguan President Anastasio Somoza “may be a son of a bitch, but he’s our son of a bitch.”

But there are many countervailing examples of U.S. interest in human rights and democratic ideals abroad. Following the conclusion of World War II, the U.S. helped establish the Universal Declaration of Human Rights, which sets out fundamental human rights to be universally protected, and chartered the United Nations, which provides peace and security through cooperation, not war.

As former Secretary of State Henry Kissinger writes, Roosevelt’s realist “approach to international affairs died with him in 1919; no significant school of American thought on foreign policy has invoked him since. On the other hand, it is surely the measure of Wilson’s intellectual triumph that even Richard Nixon … considered himself above all a disciple of Wilson’s internationalism.”

Even the most hawkish U.S. presidents have incorporated a strong moral component into their foreign policy.

Ronald Reagan’s strategy in the Cold War was to encourage anti-communist resistance around the world. Under the Reagan doctrine, it did not matter whether the U.S. supported cold-blooded tyrants or murderous dictators, so long as they served as a hedge against communist encroachment.

However, Reagan painted this strategy in moral terms, not just transactionally. He deeply believed that the most serious threats to human rights came from totalitarian communists.

As scholars Jack Donnelly and Daniel J. Whelan observe, “For the Reagan administration, global strategic rivalry with the Soviet Union was a struggle for human rights, regardless of the actual human rights practices of the governments in question.”

This did not make U.S. support of dictators morally justifiable. But it does show that human rights received due attention when formulating U.S. policy.

If Obama had faced the Khashoggi murder

Would President Obama have adopted a different approach to Saudi Arabia and the Khashoggi murder?

Many foreign policy specialists point out that under Obama, the U.S. approved Saudi Arabia initiating a brutal war in Yemen due to larger strategic priorities. What were those priorities? To stay in good graces with a critical regional ally and maintain a bulwark against Iranian ambition.

The current predicament is rooted in decisions made by Obama, in particular providing too much leeway to the Saudi crown prince. But the similarities stop there.

Based on how the Obama administration managed other vexing partners in the region – such as Egypt, where it had to balance keeping the country as a security partner while admonishing it for human rights violations – I believe U.S. policy likely would have followed an alternative path.

First, the Obama administration would have consistently condemned Saudi actions.

It is hard to imagine Obama publicly contradicting a high-level intelligence report from the CIA pinning culpability on the Saudis, as President Trump has done. In fact, it is highly unlikely that such an intelligence leak would have happened at all under Obama’s watch – he always gave serious attention to recommendations from his bureaucracy.

Second, Obama would have pursued a more nuanced approach by making more deliberate use of existing diplomatic and economic tools to signal concern to the Saudis.

President Trump asserts that the U.S. either had to cut ties with Saudi or give them a free pass. That is a false choice.

The U.S. has many intermediate measures at its disposal – such as halting arms sales and increasingly punitive sanctions. Obama would have taken fuller advantage of these instruments.

Third, while Obama would have taken pains to preserve the relationship, he would have quietly sent a franker message to Saudi Arabia: Such behavior is intolerable, there must be accountability and this cannot happen again. For example, in response to the execution of 47 prisoners, former deputy national security adviser Ben Rhodes recalls, “In blunt language, Obama protested these actions, and warned the king that Saudi Arabia’s human-rights record was going to bring greater international isolation.”

What Obama would not have done is publicly assert that the only values worth defending are national interests. And that powerful – and rich – countries will receive preferential treatment from the U.S. even if they commit egregious human rights violations such as murder.

Trump has unmistakably set the U.S. down a road that breaks longstanding foreign policy precedent. His implicit endorsement of Saudi Arabia’s reckless behavior runs the risk of emboldening other leaders to pursue similar policies.

And Trump’s basis for letting Saudi Arabia off the hook – its strategic importance – is shaky. Many experts rightly point out that Saudi’s usefulness to the U.S. is limited and Saudi’s regional standing is exceptionally dependent on U.S. support.

So why give away U.S. leverage for free and dispense with decades of policy precedence based on a flimsy premise? That is something only Trump can answer.