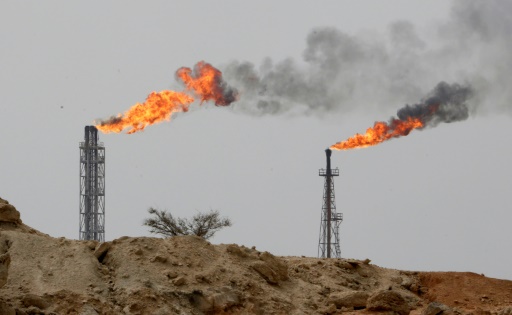 Washington (AFP) – Iran’s oil exports and financial transactions will be targeted under US sanctions that take force Monday, six months after President Donald Trump bolted from a nuclear deal.

Three days ahead, Washington detailed its specific actions targeting Iran’s banking, shipping and energy sectors, threatening penalties against companies, even those of US allies in Europe and elsewhere, who do business in them.

The sanctions bring back the punitive measures that were imposed and then lifted by former president Barack Obama, who reached an international agreement under which Iran moved to end its nuclear program. 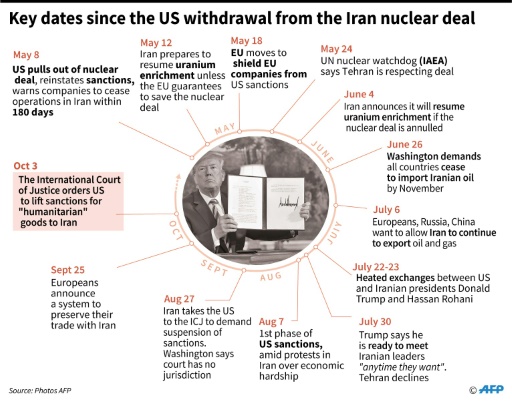 <
AFP / Cecilia SANCHEZ. Key dates since the US withdrawal from the Iran nuclear agreement

On August 7, the first sanctions lifted under the 2015 nuclear deal came into force, banning:

– The Iranian government’s purchases of dollars, or the international buying and selling of significant sums of rials, Iran’s currency under pressure

– Trade in gold or other precious metals, aluminum, steel, carbon or graphite

– US imports of Iranian carpets or foodstuffs

The toughest of the Obama-era sanctions lifted under the 2015 nuclear deal will come back, including bans on:

– Importing oil and condensate from Iran, the country’s largest earners of foreign exchange. The Trump administration says it aims for Iranian oil exports to be “as close to zero as possible.” But the US is giving exemptions to eight countries — likely including India, Japan and Turkey — that will continue to buy Iranian oil but at lower levels than in the past.

That gradual approach, US officials said, will help avoid any shock to global markets by a total cutoff of Iranian crude.

Those countries also agreed to place their payments in escrow accounts that Tehran will only be able to tap for humanitarian trade and trade in non-sanctioned goods and services, US officials said.

– Financial transactions. Starting on Monday, any foreign institution that does business with Iran’s central bank or other banks in the country will lose access to the US financial system. The risks for foreign banks are high in a globalized economy in which the dollar remains the dominant currency.

SWIFT, the international system of interbank transfers headed in Belgium, will be affected, according to US Treasury Secretary Steve Mnuchin said.

Mnuchin said SWIFT will have to stop dealing with Iranian financial institutions on the US blacklist or face sanctions itself.

Featured Photo: AFP/File / ATTA KENARE. An oil facility pictured in March 2017 in Iran, which will be banned from energy sector sales under tough new sanctions.