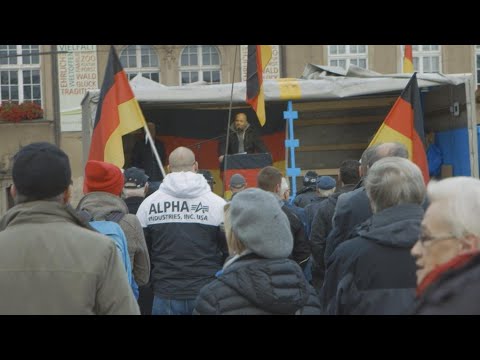 ( OpenDemocracy ) – The AfD wants to use Israel to exploit the false notion that whoever is pro-Israel could not be antisemitic, and to find strategic allies in its fight against Muslim immigration.

The relatively new party known as the Alternative for Germany (Alternative für Deutschland, AfD) and its relationship to right-wing extremism have been the subject of a great deal of intensive discussion among political and social scientists. While one stream of research focuses primarily on the strategic aspects of the AfD, such as its populist rhetoric and use of social media, another devotes more attention to the worldview of the AfD, and its increasing radicalization from a right-wing conservative party to a right-wing extremist one.

It has become undeniable that the AfD has now adopted large parts of the far-right tradition, including racism and völkisch nationalism (a form of ethnonationalism) as central components within an ideology of inequality, alongside nationalist protectionism and anti-eu economic positions, an emphatic rejection of parliamentarianism and representative democracy, and a long-standing antifeminism and hostility towards gender equality.

Nevertheless, somewhat less attention has been paid to the AfD’s handling of the Nazi past and its relationship to antisemitism. It is simply a matter of time before a party for antisemites ultimately becomes a decidedly antisemitic party. This trajectory is demonstrated by the obsessive efforts seen within the AfD to revive positive feelings for Nazi terms like Volksgemeinschaft and völkisch. Not only does this evoke the ethnonationalist and antisemitic extermination policy of the German Volksgemeinschaft, but these words also have a historical reality in the implementation of this extermination. The völkisch worldview represents the essential foundation of German anti-Semitism – and of the Nazi regime’s antisemitic extermination program.

Furthermore, the evolution of the AfD since its foundation has demonstrated a steady radicalization towards the far right, so that classical conservative stances, let alone liberal ones, no longer exist at all in the AfD today, with the latest party infighting clearly about personal dominance and not about any real differences in political agenda.

Even now, nobody of rank and influence in the AfD has ever publicly acknowledged, clearly and unequivocally, that representatives like Wolfgang Gedeon and Björn Höcke have been plainly antisemitic in their statements. Debates within the party are focused only on whether such statements might damage the party’s image – and so are only tactical in nature. The same equivocation applies to the lip service paid to Israel by the AfD. Its support is not based on fighting anti-Semitism – which the AfD clearly propagates in its treatment of the Nazi past, its inversion of perpetrator/victim roles, and its glorification of criminal institutions like the Wehrmacht. The AfD however wants to use Israel, firstly to deflect accusations of antisemitism by exploiting the false notion that whoever is pro-Israel could not possibly be antisemitic, and secondly to find strategic allies in its fight against Muslim immigration.

Nevertheless, even the supposedly pro-Israel stance of the AfD has now become largely a myth, one based mostly on statements by politicians who have since left the AfD. More recently, during its 2017 federal party convention in Cologne, a motion to consider a clause entitled “strengthening German-Israeli friendship” for inclusion in its federal election platform failed to pass; in a speech against further consideration of this proposal, it was argued that there existed a problem with Israeli “war criminals.” A few months later, the leading AfD figure Alexander Gauland even questioned whether the championing of Israel’s right to exist, long an element of Germany’s national consensus, is actually in Germany’s “national interest.”

In order to understand the party’s true nature and its progress towards right-wing extremism, one cannot overlook the antisemitism that has become an established fixture in the worldview of the AfD. The party would clearly prefer to downplay the antisemitism evidenced by many of its members and officials, since open acknowledgement of this would remove the last obstacle to recognizing the AfD as simply one more of the many far-right parties that have emerged in Germany’s postwar history – with the only difference being that the AfD has managed to profit from the middle-class image of its early phase, thus allowing it to achieve double-digit results in the federal elections of 2017, making it the first far-right party to enter the German parliament since the end of the Nazi era.

For insight into the radicalization of the AfD, the result of a recent representative opinion poll is particularly enlightening. The renowned Allensbach Institute for Demoskopie showed in June 2018 how common antisemitism is among supporters of the AfD: 55 percent of the supporters of the AfD agree with the statement: “Jews have too much influence in the world.” By contrast, no more than 20 percent of the supporters of any other German party agree with the same statement. These results reveal that antisemitism unites not only the officials of the party, but also its supporters.