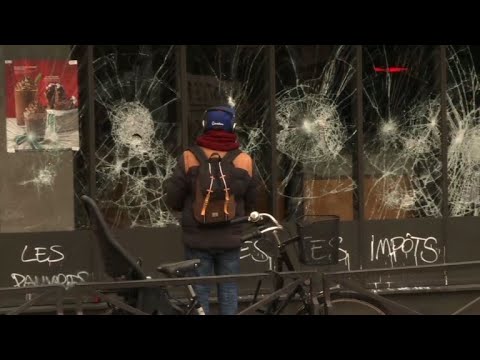 (Informed Comment) – While Americans have been preoccupied by the nostalgic reminiscence and burial of a former President, French citizens have been engaged in mass civil disobedience enacted by the gilets juanes or “Yellow Vests,” the roadside safety vests French drivers are required to have. This action reflects and exposes social divisions barely recognized and inadequately addressed by both the neoliberal corporate right and the traditional social democratic parties, both here and in France.

To put this dispute into terms US drivers would understand the government of President Emmanuel Macron proposed a hike of 28 cents per gallon for diesel and 17 cents per gallon for gasoline.. Though these taxes were the immediate trigger, the context in which this policy was imposed made the difference. In domestic economic policy Macron has been a smoother French version of Donald Trump. The tax on diesel followed a whole series of tax gifts to the most wealthy French citizens and businesses, including elimination or reduction of estate and wealth taxes and replacement of a progressive income tax with a flat tax. A neoliberal dream that had already become a nightmare for working class citizens.

In the context of a pro- rich fiscal policy the diesel tax might have been the proverbial straw that broke the camel’s back. Its implications, however, are more significant when we consider the role of diesels in French life. French labor activist Leon Crémieux points out: “Every day 17 million people work outside of their municipality of residence, i.e. 2/3 of those economically active. Of these 2/3, 80% use their own vehicle. The concern for the cost of fuel is therefore a popular concern, in the greater Paris region and in the regions in particular (even in the Paris region, only one in two employees uses public transport to go to work).”

Many French workers live in rural communities and face long daily commutes to their work. And unlike the case in most other European countries diesels are the primary node of transportation.

This civil disobedience is distinctive not only in that it has been massive, has taken place in communities throughout France but also in what it lacks. The yellow jackets have no leader, and most of the established trade union leaders at least initially opposed the action.

Stated reasons for the opposition are that the movement is selfish and anti environmental. Some environmental leaders have concluded that resistance to the diesel tax in France does not bode well for future climate initiatives not only in France but also in other advanced industrial societies. That concern is misplaced. Crémieux points out: “nothing is done to develop public transport, in rural areas and in the periphery of large cities, while the working classes must travel ever greater distances from their workplaces and urban centres. There is an unbearable government arrogance in charging more to people who will not be able to change their mode of travel or vehicle!

Employees, especially families, are forced to live farther away from urban centres, and precariousness accentuates the distance from the workplace. In the Paris region, the 50% of employees who take a car to go to work are most often those who are forced to live on the periphery or work in staggered hours.[“ I would add that extremes of wealth fuel speculation in land, which in turn furthers wealth inequality.}

In a larger sense the Yellow Vests movement reflects longstanding neglect or exploitation of rural communities. Not only in France but in the US and much of Western Europe. (Katherine Cramer’s The Politics of Resentment skillfully documents the role of rural resentments of urban elites in right wing Republican ascendency in Wisconsin.) And Left parties can often share in this bias. Remember Karl Marx and “the idiocy of rural life” ”

Here in the US the knowledge industry, supported by both centrist Democrats and corporate Republicans, is a prime culprit. Rural communities are not merely victims of technology or blind market forces. Dean Baker comments: “These government-granted monopolies are explicitly designed as tools to promote innovation. Over the last four decades, they have been made stronger and longer. They could alternatively be made shorter and weaker. We could also look to use other, more efficient, mechanisms for financing innovation and creative work. This would mean less money going to the software industry in the Silicon Valley and Seattle, less money going to the entertainment industry in Los Angeles, and less money going to the biotech industry outside of Washington, DC. There could be as much as $1 trillion a year at stake with these monopolies, an amount that is equal to roughly 60 percent of after-tax corporate profits.”

Add to intellectual property the favorable treatment of finance by both the US Federal Reserve and the European Central Bank. They channel inordinate profits from the hinterland into the big dynamic central cities that house corporate headquarters and top level executives

One cannot say simply across the board that rural poverty is worse. We would have to look at specific cases and in more granular detail. But this is surely a case for treating these grievance seriously, respecting the activists, and participating in dialogue with them. Activists could be potential contributors to a broader political movement that might for instance build smart grids and high speed internet access that could enhance the quality of rural life.

So are the Yellow Vests selfish, or bigoted, or manipulated by the far right? Aurelie Dianara , a research associate in international economic history at the University of Glasgow, offers this perspective:

“ Even the moralistic criticisms that accuse the gilets jaunes of materialism and selfishness can be called into question. Was not the increase in the price of bread the main factor pushing the women of Paris to mount their furious march on Versailles in October 1789? The history of social struggles is peppered with movements arising from an exasperation that owed to the material conditions of the popular classes, movements that can give rise to greater awareness, bring out wider demands, and which can converge with other struggles. Or not.”

The or not here is well taken. Predicting social revolutions is a fool’s game. Whether this nascent leaderless movement becomes part of a force for social and economic revolution depends in part on the contributions of French unions and in turn the support Yellow Vests might give to a host of current union efforts to quash neoliberal austerity and privatization initiative.