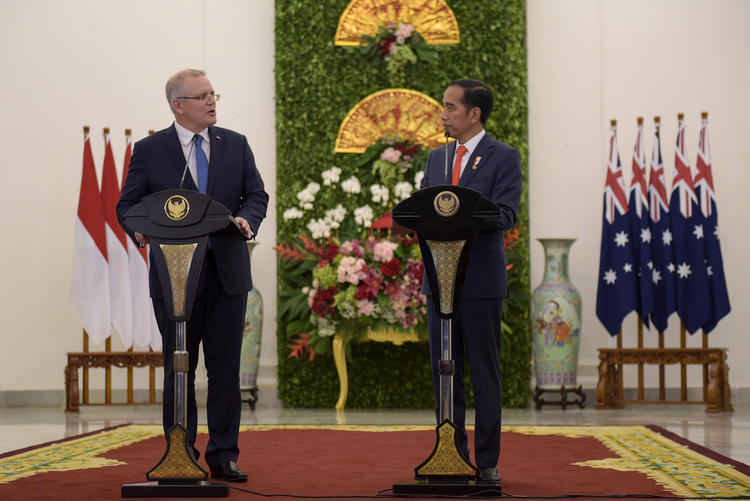 Ann Arbor (Informed Comment) – The decision of the Australian government of PM Scott Morrison to recognize “West Jerusalem” as the capital of Israel but to hold off moving its embassy there until there is a peace settlement in the Israeli-Palestinian conflict might look on the face of it like a victory for Israel. It is quite the opposite, a sign of how even strong allies of Israel are increasingly constrained by rising Muslim powers.

Morrison’s party is alleged to have crafted the policy in search of Jewish votes in Australia and perhaps in an attempt to make the Trump administration happy. Although called the “Liberal” Party, it is what Americans would call “conservative.” Morrison is a horrible person who once complained that when a boatload of refugees trying to get to Australia capsized and killed 48 persons, the Australian government was wrong to fly 22 relatives in for the funeral.

But why only recognize “West Jerusalem” as Israel’s capital rather than, as Trump did, the entire city? Australia went so far as to recognize East Jerusalem as the future capital of Palestine and to envision an Australian embassy there in the future!

The Israelis noticed that Canberra was actually only offering a before-the-fact recognition of a two-state solution.

Since despite beating around the bush on the issue, the far right Likud Party that rules Israel is dead set against ever allowing a Palestinian state, Australia’s move elicited squawks of outrage from Likudniks. Israel’s minister for regional cooperation, Tzachi Hanegbi, who is close to Prime Minister Binyamin Netanyahu, slammed the Australian formula as a “mistake” that he said he hopes Canberra will rectify. He wants recognition of all of Jerusalem as the Israeli capital.

Morrison went as far as he could toward pleasing pro-Israel Australian voters, including some of his own backbenchers in parliament, as he could.

But he was constrained.

Katherine Murphy at the Guardian cleverly sees Morrison and Jokowi as the mirror image of each other, with both men under pressure from their right. She blames Morrison, however, for pitching the issue when he did, since there was no really pressing reason to do so, inasmuch as it might help shift Jokowi to the right by increasing the pressure he is under.

Faced with Indonesian (and Malaysian) pressure, Morrison simply could not act as he and his fellow right wingers would have liked. Indonesia has a nominal gross domestic product of slightly over $1 trillion a year, while Australia’s is closer to $1.4 trillion. The two countries are near one another as these things are counted in island southeast Asia, and both could grow faster if they did more trade with one another.

Over the next century, given current population trends, Muslims will likely go from being about 25% of humankind to being 33% of the planet’s inhabitants. Globalized media like Aljazeera have exposed even Muslims distant from the Middle East, like those in Indonesia, to the plight of the Palestinians, whom the Israelis are occupying and keeping stateless and under the thumb of the Israeli army. The corrupt oil sheikhs on which Netanyahu is now placing his bets will be displaced by electric cars, but the Muslim masses will only grow in strength and influence.

There was a time not so long ago when Australia would not have given a fig what Indonesia thought of its foreign policy, but now Indonesia is the world’s 16th largest economy and a member of the G20.That even an anti-immigrant, pro-Trump right winger like Scott Morrison felt he could not risk absolutely alienating Jakarta, and so was forced to craft a Jerusalem policy that satisfied no one but definitely disappointed the Likud, is a sign of the future.