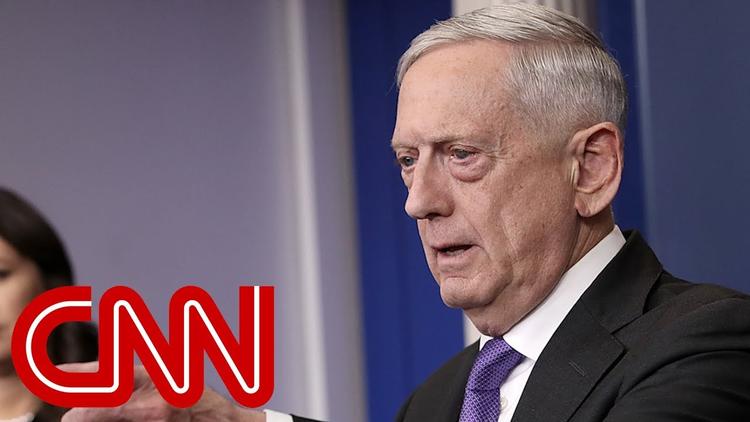 Ann Arbor (Informed Comment): Official Washington was horrified at the resignation on Thursday of Secretary of Defense James Mattis, who wrote Trump a letter (below) that said “Because you have the right to have a Secretary of Defense whose views are better aligned with yours on these and other subjects, I believe it is right for me to step down from my position.” The move came in response to Trump’s abrupt announcement on Twitter that the US would withdraw its 2000 special operations forces from northeast Syria, fully and immediately. Trump tried to represent the departure as a retirement, but it seems clear that Mattis is resigning in protest, having attempted Thursday morning to argue Trump out of his precipitous move.

On Thursday evening, US officials said that Trump would pull 7,000 troops out of Afghanistan, out of 14,000 there presently, and rumors swirled that he would get out entirely.

Trump is erratic and selfish and transactional, and it is understandable that the idea of having him in charge of US military affairs with no check by a seasoned officer like Mattis should terrify Washington.

And it certainly is the case that Mattis has often restrained Trump’s worse instincts, arguing him out of reviving black sites and torture, arguing him out of siding with Saudi Arabia in the attack on little Qatar, and opposing Trump’s punitive measures toward transgender troops.

But if you were going to judge Mattis’s performance as Secretary of Defense, you’d have to look at his performance with regard to military challenges.

Mattis basically followed through on the policies toward ISIL set by the Obama administration and by his predecessor Ash Carter. The alliance with the leftist Kurds to defeat ISIL in Raqqa was an Obama/Carter production that Mattis benefitted from and pursued in his own tenure (Raqqa fell to the Kurds in October of 2017). Likewise the taking of Mosul in northern Iraq followed the Obama/ Carter template (Mosul fell in July 2017).

There is, however, a difference between Obama policies toward ISIL and those of Mattis. The Rules of Engagement appear to have been substantially loosened under Trump. In 2017, US airstrikes in the region killed 215% as many civilians as had died in them the year before. Trump may have ordered it, but Mattis could have pushed back the way he did on other issues. There is no evidence he did.

After ISIL was defeated, Trump blocked civilian aid for civilians in Raqqa, without which there was always a risk that the young men would turn back to radicalism. Refusing to fund the rebuilding of Raqqa after it was destroyed by unnecessarily brutal bombing raids (compared to the Obama era, which was not ‘nice’ to begin with) is a way to ensure the reemergence of ISIL down the road.

In Afghanistan during the past two years there has been a steady worsening of the security situation on the ground. Mattis years ago said that it was “fun” to kill Taliban who mistreated their women. Fun or not, he hasn’t been effective at it. It is now estimated that 40% – 50% of the country is under Taliban rule. Some 28,000 Afghanistan National Army troops have been killed since 2015, which is not exactly a win. Trump’s dropping of the mother of all bombs on some radicals had no long term effect. Mattis said he sought a political solution that did not involve withdrawing US troops from that country. Mattis was losing Afghanistan, as even the right wing Weekly Standard admitted, and can’t be accounted as a success story on that front.

Mattis vehemently supported the Saudi war on Yemen, with all its brutality and the endangerment of millions of civilians (who may starve to death). Mattis is so gullible that he bought the silly Saudi propaganda that the indigenous Houthi rebel group is Iranian-controlled. Iran has had something to do with the Houthis. It hasn’t had that much to do with them. Saudi crown prince Mohammed Bin Salman, whom Mattis backed, is a wild man, and Mattis tried to whitewash the murder of Jamal Khashoggi in testimony on the hill, saying there is no “smoking gun.” (How about a smoking bone saw?).

Mattis isn’t a knight in shining armor but another right wing general of the Westmoreland sort, who will always win your war for you if you just let him play dirty enough and give him enough men and money and decades.

I have been privileged to serve as our country’s 26th Secretary of Defense which has allowed me to serve alongside our men and women of the Department in defense of our citizens and our ideals.

I am proud of the progress that has been made over the past two years on some of the key goals articulated in our National Defense Strategy: putting the Department on a more sound budgetary footing, improving readiness and lethality in our forces, and reforming the Department’s business practices for greater performance. Our troops continue to provide the capabilities needed to prevail in conflict and sustain strong U.S. global influence.

One core belief I have always held is that our strength as a nation is inextricably linked to the strength of our unique and comprehensive system of alliances and partnerships. While the U.S. remains the indispensable nation in the free world, we cannot protect our interests or serve that role effectively without maintaining strong alliances and showing respect to those allies. Like you, I have said from the beginning that the armed forces of the United States should not be the policeman of the world. Instead, we must use all tools of American power to provide for the common defense, including providing effective leadership to our alliances. NATO’s 29 democracies demonstrated that strength in their commitment to fighting alongside us following the 9/11 attack on America. The Defeat-ISIS coalition of 74 nations is further proof.

Similarly, I believe we must he resolute and unambiguous in our approach to those countries whose strategic interests are increasingly in tension with ours. It is clear that China and Russia, for example, want to shape a world consistent with their authoritarian model gaining veto authority over other nations’ economic, diplomatic, and security decisions to promote their own interests at the expense of their neighbors, America and our allies. That is why we must use all the tools of American power to provide for the common defense.

My views on treating allies with respect and also being clear-eyed about both malign actors and strategic competitors are strongly held and informed by over four decades of immersion in these issues. We must do everything possible to advance an international order that is most conducive to our security, prosperity and values, and we are strengthened in this effort by the solidarity of our alliances.

Because you have the right to have a Secretary of Defense whose views are better aligned with yours on these and other subjects, I believe it is right for me to step down from my position. The end date of my tenure is February 28, 2019, a date that should allow sufficient time for a successor to be nominated and confirmed as well as to make sure the Department’s interests are properly articulated and protected at upcoming events to include Congressional posture hearings and the NATO Defense Ministerial meeting in February. Further, that a full transition to a new Secretary of Defense occurs well in advance of the transition of Chairman of the Joint Chiefs of Staff in September in order to ensure stability within the Department.

I pledge my full effort to a smooth transition that ensures the needs and interests of the 2.15 million Service Members and the 732,079 DoD civilians receive undistracted attention of the Department of all times so that they can fulfill their critical, round-the-clock mission to protect the American people.

I very much appreciate this opportunity to serve the nation and our men and women in uniform.