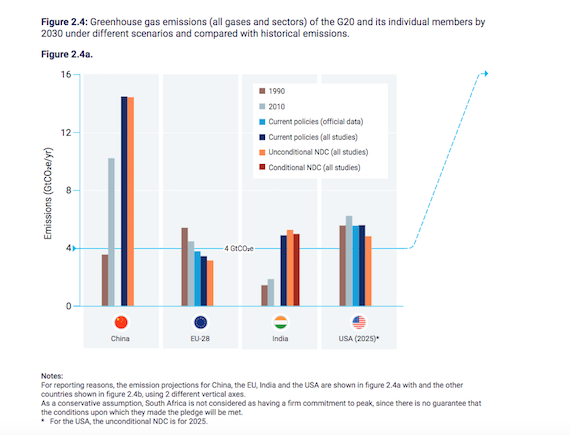 Ann Arbor (Informed Comment) – Carbon Dioxide emissions were up again this year, after a hiatus during which people wondered if the world had gotten a handle on greenhouse gases. It turns out, not so much. A new UN report sounds the alarm.

The spike in CO2 this year is a bad sign, but actually it is the output of greenhouse gases over the next 12 years which will be decisive. And there, there is more bad news.

Some 78% of dangerous greenhouse gases are put into the atmosphere every year by the G20, the twenty countries with the highest gross domestic product. That’s right. There are 195 countries in the world, but just 20 of them put out most of the carbon dioxide.

That’s right. Nearly 4/5s of carbon dioxide emissions come from these 20 richest countries in the world, and fully half of them are not going to bother to meet their own commitments to reductions of greenhouse gas emissions by 2030.

The US under Trump leads this deadbeat pack. Argentina, Australia, Canada, EU28, the Republic of Korea, Saudi Arabia, and South Africa bring up the rear.

Much more virtuous are Brazil, China, Japan, India, Russia and Turkey, who are projected to come in at the level of their goal or even to reduce emissions beyond their goal.

You have a sense that some of the countries who will miss their reduction goal, like Canada, will be shamefaced and regretful. Not the US of Trump, which is proud to be farting out CO2 likeflatulent drunk.

The earth is warmed by the rays of the sun, which strike the earth and then radiate back out to outer space. Carbon dioxide and methane in the atmosphere keeps the heat from radiating away, and therefore increases the heat of the atmosphere. Every time you burn coal, gasoline, or natural gas, you are putting a greenhouse gas into the atmosphere. The irony of people burning fossil fuels to run air conditioners in the summer to keep themselves cool is one of the great dark jokes of the twenty-first century.

If the governments of the world pulled together, they could possibly keep the heating of the earth to just an extra 2 degrees centigrade (3.6 degrees F.) At this rate, they are highly unlikely to meet their goals.

Although China and India are big emitters today, they have put in place plans for so many solar penels for so many wind turbines that they can go green if they want to. The US is lagging in this regard.