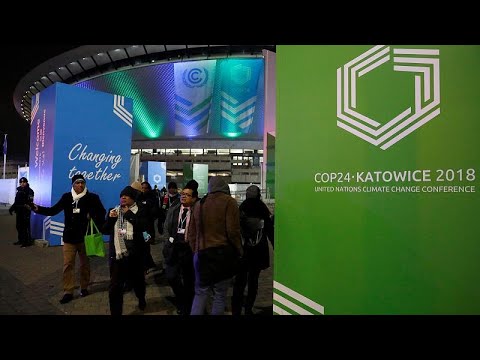 Ann Arbor (Informed Comment) – The Climate Summit at Kotwice, Poland, ended on a positive note, with the 195 countries present committing themselves to financing instruments in a quest to cut carbon dioxide emissions and keep global heating to 1.5 degrees C. (2.7 degrees F.). Given that so many countries are producing so much CO2, that goal may not be practical. The next best thing would be to stop heating at 2 degrees C. (3.6 degrees F.)

Apparently one of the positive achievements of the summit was agreements on contributions by rich countries like Germany to funds that will help soften the blow to poorer countries of the global south in having to get off cheap coal and invest in solar and wind infrastructure. (They’ll save money over the long run by doing this, but may not have the up front investment money lying around).

The agreements reached are wholly inadequate and do not reflect the urgency of the climate crisis we are in. But they might have a positive psychological effect, in keeping the Paris goals alive and encouraging governments to encourage companies and consumers to take action.

If the countries of the world do nothing to cut down on carbon dioxide production, likely the world will heat up by 3 degrees C. this century, or an average of 5 degrees F. These averages are misleading, by the way. Scientists are talking about the average temperature of the surface of the earth, including the oceans and the ice caps at the poles, which is currently about 60 degrees F. That is already about a degree and a half F. higher than the 20th century average. If it goes to 65 degrees F. over the next 80 years, that could already be a huge calamity for civilization. Mind you, temperatures won’t go up just 5 degrees F. in Phoenix, AZ — it could be more like 10 or 15 degrees there. They don’t have a nearby ocean (oceans are colder) and are low-lying. Will Phoenix still be habitable at those temperatures? Likely they’ll often have to close the airport, because air that hot doesn’t provide the kind of lift airplane wings need to go airborne.

When I was living in Egypt in the early summer once, I read in the newspaper that one day it got up to 48 degrees C. (118.4 degrees F) in Upper Egypt, and that as a result the rubber coating of the electrical wires melted. That is a significant hazard. In parts of the US, we will have to get used to that 118 degrees F in the shade. The good Lord knows what will happen to the people in Upper Egypt if they go to 130 degrees F. in the summer.

The 2018 National Climate Assessment by a number of US government agencies warned of very dire consequences if we don’t stop burning oil, gas and coal. The IPCC report this fall concluded that we had to swing into substantial action by 2030 to cut carbon emissions by 50% if we’re to keep global heating to 1.5 degrees/ C. 2.6 degrees F. over preindustrial times. That conclusion, which is contested, is so alarming because nothing of the sort is at all likely to happen.

And now it appears that a recent hiatus in the increase in CO2 production is over and that the world will put a lot of extra amounts of this heat-trapping gas into the atmosphere in 2018. (Even the hiatus wasn’t great, since it only meant that production wasn’t increasing annually– but this stuff is cumulative, so just putting out the same amount, say 33 billion metric tons, annually is already a catastrophe).

The price of solar and wind energy is plummeting, so that some market forces are now operating to favor them over fossil fuels. In many places it would actually be cheaper to build a solar installation or wind farm and run it than to continue to operate a coal plant. That is, it would be cheaper even with the cost of building the new installation figured in. In an excellent sign, Shell is going halfsies on a new offshore wind venture off the coast Massachusetts. Shell execs know that over the next decade the number of electric cars will mushroom, putting in question the future of petroleum as a fuel commodity.

But pro-green government regulation is key to slashing CO2 emissions the way we need to slash them if we are to avoid the worst effects of global heating. Likewise, governments like those of Russia, Saudi Arabia and the US can hold things up despite market interest. In the US, some state legislatures actually punish solar panel installation by levying extra taxes on the panels, on behalf of coal and gas corporations. ( 100 fossil fuel companies generate 73 percent of all the world’s CO2 production).

The US has recently seen a mammoth flood in Houston, the flattening of Puerto Rico, and enormous wildfires in California that even forced the stars to flee Malibu. Your 24 hour cable news program either doesn’t remind you of these tremendous extreme weather events or of how their frequency and intensity is being reinforced by heat-trapping gases like CO2 that human beings are putting into the atmosphere by burning oil, gas and coal. The climate crisis isn’t in the future– it is here and we are living it. COP24 will be judged a success or a failure depending on its practical effect in helping humankind get off fossil fuels. Sorry, Russia and Saudi and Trump, you are the past (and a stupid one), not the future.