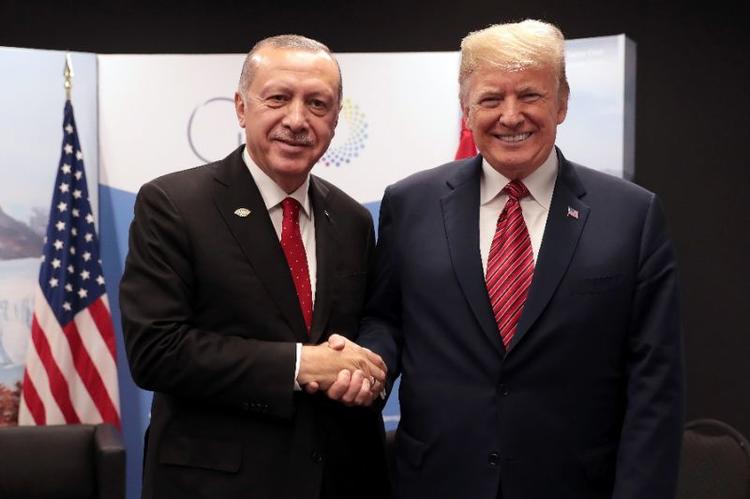 Turkish President Recep Tayyip Erdogan and his US counterpart Donald Trump agreed Friday to “more effective coordination” between their countries’ operations in Syria, after Ankara threatened to launch a new offensive in the war-torn nation.

The two leaders spoke after Erdogan warned of a fresh Turkish operation against a Syrian Kurdish militia that risks aggravating already strained relations, as the US not only supports the militia but has troops deployed alongside its fighters.

Trump and Erdogan “agreed to ensure more effective cooperation on the subject of Syria” during a telephone call, a Turkish presidential source said.

Erdogan on Wednesday said that Turkey was planning to launch a new offensive within the “next few days” against the Kurdish People’s Protection Units (YPG) militia east of the Euphrates River in northern Syria.

Ankara views the YPG as a “terrorist offshoot” of the Kurdistan Workers’ Party (PKK), which has waged an insurgency against the Turkish state since 1984 and is considered a terror group by Ankara and its Western allies.

But the YPG has spearheaded the United States’ fight against the Islamic State group in Syria under the banner of the Kurdish-led Syrian Democratic Forces (SDF) alliance.

During their phone conversation, Erdogan shared with Trump “Turkey’s legitimate security concerns caused by the presence and actions” of the Kurdish militia, the source said.

Earlier on Friday Erdogan said he is “determined to bring peace and security to areas east of the Euphrates” River in Syria’s north.

He also strongly criticised Washington’s support of the YPG, which has caused tensions between the NATO allies in recent years.

The Pentagon has warned that any “unilateral military action into northeast Syria by any party, particularly as US personnel may be present or in the vicinity, is of grave concern”.

Washington’s relationship with the YPG is one of the main sources of tensions between Turkey and the United States
Tensions have spiked in recent weeks after the US set up observation posts in the northeast Syria border region intended to prevent altercations between the Turkish army and the YPG.

Adding to the heated debate, a Turkish soldier was shot dead by YPG forces on Thursday in the northern Syrian region of Afrin, according to Turkey’s defence ministry.

If Turkey does launch an operation east of the Euphrates, where US forces are deployed with the SDF, a point of contention will be the city of Manbij, just west of the river.

American troops are also situated in the flashpoint city, which is controlled by the YPG.

In a bid to avoid any clashes, Ankara and Washington agreed to a “roadmap” for Manbij in June which included YPG forces withdrawing from the city and joint US-Turkish patrols, which began in November.

However, as Ankara has repeatedly reminded Washington, the YPG remains in the flashpoint city.

On Friday, Erdogan again urged the US to drive the Kurdish militia out of the city.

“Here is what we say: either you clean the city and (the YPG) leave, or we’re going into Manbij as well,” he warned.

Turkey has previously launched two operations in northern Syria. The first offensive began in August 2016 with Turkish forces supporting Syrian opposition fighters against IS and was completed by March 2017.

Then in January 2018, Turkish military forces backed Syrian rebels to clear the YPG from its enclave of Afrin.

In March, the operation was completed with the capture of Afrin city.