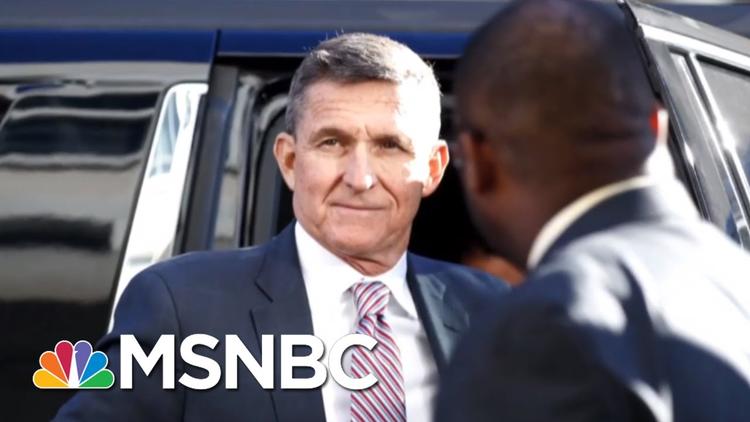 Ann Arbor (Informed Comment) – Disgraced former National Security Adviser to Donald Trump, Michael Flynn, had his sentencing postponed until March on Tuesday after Judge Emmett Sullivan raked him over the coals for lying to the FBI in the White House and for intimating that he was not really guilty and had been entrapped by the FBI.

Flynn had had several conversations with Russian ambassador Sergey Kislyak before and after Trump was elected. He is alleged to have tried to convince Moscow not to retaliate for sanctions slapped on Russia by outgoing president Barack Obama. He also is alleged to have pledged to Russia that US sanctions on Russian officials would be lifted. It is not clear what the quid pro quo was for these assurances.

When questioned about his contacts with Kislyak at the White House by the FBI on Jan. 24, 2017, Flynn lied about the content of his conversations with the Russian ambassador on Dec. 22 and 29.

The Logan Act forbids private citizens to conduct foreign policy on behalf of the United States, and Flynn was likely in violation of it by having policy conversations with Kislyak before Trump was sworn in. The Logan Act is not known for actually resulting in charges, however, and if Flynn thought he was in jeopardy from it, he likely was over-reacting.

Sullivan at one point accused Flynn of continuing to function as a foreign agent via money paid to his Intel Group firm by the Turkish government while he was NSC adviser. The judge later withdrew this charge, but actually the facts of the matter aren’t clear. Flynn told the Trump transition team that he might need to register as an agent of a foreign power. It isn’t clear that he had stopped working for Turkey before he entered the White House.

Flynn’s Intel Group had taken some $600,000 from the Turkish government to lobby for the extradition to Turkey of Fethullah Gulen, leader of a New Religious Movement, Hizmet (service). The Turkish government of President Tayyip Erdogan alleges that Gulen was behind a 2016 coup attempt, but US intelligence agencies and the State Department say they cannot find convincing evidence of this charge. At some points, Flynn is alleged to have set in motion a plan to kidnap Gulen and send him back to Turkey for arrest. All this was going on as he was closely involved in Trump’s campaign in fall of 2018.

Flynn contacted a congressman and wrote an op-ed on election day, 2018, comparing Gulen to Iran’s Ayatollah Khomeini and urging his extradition to Turkey. It is not clear that the Turkish government was getting its money’s worth. But Flynn and his associates repeatedly attempted to hide from the US government that he was paid by the Turkish government, maintaining that the money came from a Turkish power broker, Ekim Alptekin, who is close to Erdogan. Bijan Rafiekian, aka Bijan Kian, Flynn’s business associate at Intel Group, was also indicted this week, for failing to declare himself a foreign agent.

The picture of Flynn that emerges from the public record is of a man who was wheeling and dealing with Russia and Turkey in fall-winter 2016-17. He was trying to mollify Russia over Obama’s new sanctions and trying to find a way to get Gulen from Pennsylvania to Ankara.