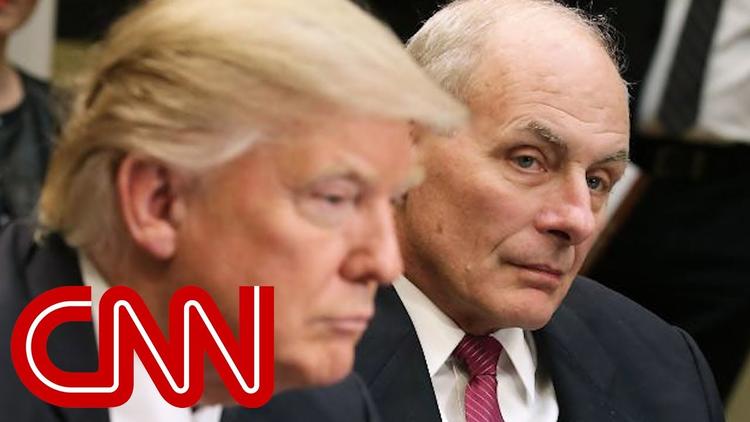 Trump announced Saturday that his chief of staff, John Kelly, will leave at the end of the month. It has been reported that the two men are not speaking. Kelly was often seen as a force for stability in the Trump administration, but as I warned when he first came in, he shared many of Trump’s crackpot far rightwing ideas and therefore was not in fact a source of stability for the country.

1. Kelly thought that we are under siege:

As journalist Michael Cohen wrote in response at the Boston Globe, “Cyber-terrorists have never killed an American citizen, no failed state threatens America and more Americans are killed by lightning strikes than sadistic radicals.”

2. Kelly believed that construction on Trump’s border wall would begin by summer of 2017, and seemed to think that if it had, it would have been a good thing.

3. Nor is the wall needed or wanted by a majority of Americans. Kelly was almost delusional about US immigration enforcement: “Nothing’s been done in the past eight years to to enforce the border rules and regulations, not to mention many of the immigration laws inside of the United States…”

Fact: The Obama administration deported at least as many people as the Bush administration had, if you use the same definition for deportations in both administrations. By sheer reported numbers, Obama deported some 2.5 million people during his 8 years while Bush deported 2 million. They probably actually deported about the same number. Kelly’s bizarre notion that the laws were not implemented since 2009 is flat wrong.

Kelly: “But a big name of the game is deterrence.”

NPR: “Even though people say that’s cruel and heartless to take a mother away from her children?”

Kelly: “I wouldn’t put it quite that way. The children will be taken care of — put into foster care or whatever. But the big point is they elected to come illegally into the United States and this is a technique that no one hopes will be used extensively or for very long.”

Kelly’s doctrine of “deterrence” of undocumented immigration into the US through family separation was undergirded by a special kind of sadism and ignorance combined. First of all, villagers in Honduras were not going to know about Kelly’s policy. Second, they are so desperate that many will take the risk anyway. Third, it is wrong to pounce and take US citizen children away from their mothers and fathers all of a sudden, giving them no time to make alternate arrangements. As for foster homes, with all due respect to the dedicated people who often run them, social science has proven that they are the biggest producer of a criminal class in the US. Children growing up without strong parental role models have a much greater chance of ending up in prison. Yes, that’s right. Social science says that if you want a safe society, don’t deport the parents of US citizen children.

5. Kelly wanted to prioritize deportation of undocumented people who use marijuana on the circa 1910 grounds that it is a “gateway drug.” It is not, or Colorado would be nothing but heroin addicts. Legalization of marijuana tracks with lower crime rates.

6. Kelly said of reports that Jared Kushner had met with the Russians during the campaign, before these reports were confirmed, that “any channel of communication” with Russia “is a good thing.” . Given Mueller’s revelations this week, that particular assertion hasn’t aged well for the general.

7. Then we should remember Kelly’s bizarre performance during Trump’s first attempt at a Muslim ban, when he gladly acted without any regard to the US constitution and claimed to have authored the policy (the Mussolini-loving Steve Bannon and Stephen Miller sprang it on him).

8. Kelly bizarrely defended Confederate slave drivers of the 1860s as having lived at a time before the evils of slavery were apparent to moral people. Haiti abolished slavery in 1804, Mexico in 1824 and Muslim Tunisia (!) in 1846. In fact, Tunisia tried to convince the antebellum US to give up the foul practice, after its elite engaged in a modernist debate that instanced the Qur’an’s singling out of manumission as a good deed. That’s right folks, not only were Muslims in Tunis way ahead of Americans in the Deep South in the 1840s, but they were way ahead of John Kelly in 2018.

Oh, Kelly may have cut down a little bit on Trump’s circus of chaos in the West Wing. But what the administration needed was a moral voice, someone who would push back against the conspiracy theories that guide so much of Trump’s policy. Kelly was not that man. People praise him for his military service, but I think his positions, laid out above, profoundly contradict that ethos of the US military, and that he brought shame to the uniform he thankfully no longer wears.