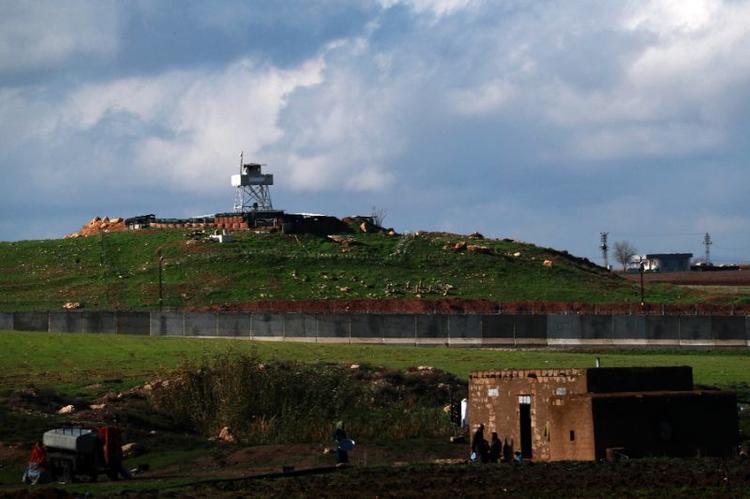 US President Donald Trump’s decision last week to pull troops out of Syria could have far-reaching repercussions for the multitude of parties involved in the conflict.

After a call with his Turkish counterpart Recep Tayyip Erdogan, Trump appeared to be passing on responsibility for the fight against the Islamic State group (IS) to Turkey.

If it fills all of the security vacuum left by the US and its current Kurdish allies, Turkey, which already has sway over northern regions, will extend its influence in Syria to a huge chunk of the country.

Turkey has been threatening an offensive against the People’s Protection Units (YPG), a US-backed Kurdish militia which controls northeastern Syria and is considered a terrorist group by Ankara.

The YPG, which has spearheaded the ground battle against IS and lost thousands of fighters in the process, sees a US pullout as no less than a betrayal.

A Turkish onslaught would put pay to the minority’s ambitions of consolidating a Kurdish belt along the Turkish border and securing increased autonomy.

The beleaguered Kurds may have to seek a rapprochement with the government in Damascus to guarantee protection from their Turkish archfoes and cut their losses.

If it works with the Kurds, the government could split the US vacuum with Turkey and recover more of Syria, including the former IS stronghold of Raqa and several oil fields. 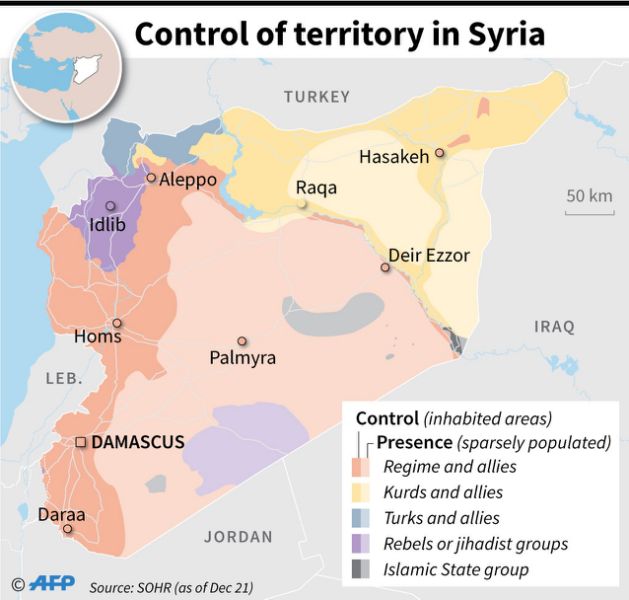 Territory control in Syria, as of December 21 (AFP Photo/).

Once rid of US military presence along the Iraq-Syria border, Iran — Damascus’s main backer with Russia — can consolidate its land bridge to the Mediterranean, a decades-old strategic goal.

For Moscow, the US troops withdrawal would complete a process that saw it take over from Washington as the main international player in the Syrian conflict but will also come with added responsibility to solve it.

The various jihadist and rebel outfits stationed in Idlib province, which is already under Turkish influence, could see reshuffled alliances herald a much-feared government offensive on their last bastion.

According to geographer and Syria expert Fabrice Balanche, their only alternative would be to further throw their lot in with Turkey, wage its battle against the Kurds and be used as settlers in reconquered areas.

The jihadists have been confined by the US-Kurdish offensive to an ever-shrinking pocket along the Euphrates River valley.

But contrary to Trump’s claim, they have not been eliminated and some analysts and officials, including in Washington, see the US pullout as abandoning the fight against IS as victory nears.

The jihadists had been planning for military defeat in their last redoubt and a slump in operations against them could allow them to regroup and prepare for “IS 2.0”.

Israel has been described as one of the big potential losers from a US withdrawal that could encourage Iran and its proxies to develop their military capabilities closer to its northern borders.

Yet Israeli officials and analysts have stressed that the Jewish state has long managed that front alone and would continue to do so. It may even look increasingly to Russia to achieve its strategic goals.

Featured Photo: “A picture taken from the Syrian town of Darbasiyah, on December 13, 2018, shows observation posts on the Turkish side of the border wall separating Turkey from Syria (AFP Photo/Delil SOULEIMAN).”