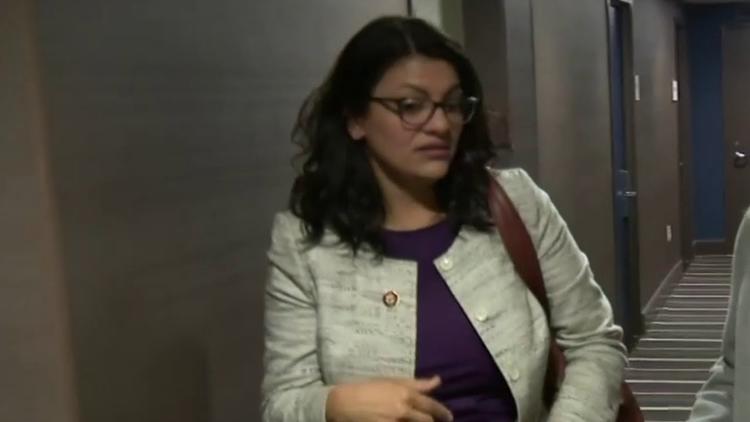 Ann Arbor (Informed Comment) – Why does Donald Trump get a pass on speaking and acting obscenely but Rashida Tlaib is pilloried for calling him a Mofo? It is because US corporate media and political elites expect the wealthy to do bad imitations of working class profanity (so as to fool the rubes into voting for them), but despise the real thing.

Rashida Tlaib is the daughter of a Ford factory worker and one of 14 children. Although she earned higher degrees, including a law degree, she grew up in a disprivileged working class family–inasmuch as they were Palestinian refugees and hardly part of the labor aristocracy. Tlaib came by her ability to curse like a sailor honestly. She didn’t go to finishing school or come out as a debutante. She has said that her grandmother, a Palestinian from the working class in the old country, “told it like it is,” by which I take it she means she was capable of some salty language.

Rich people masquerading as the guy you’d like to have beer with are not a new thing in American politics. Corporate media, increasingly staffed with Ivy League millionaires that are a huge contrast with the dogged, penniless gumshoes of journalism past, gives this appropriation a pass. Columnists such as David Brooks have, in addition, made an industry of spreading the falsehood that the working class is conservative and despises its supposed allies among professionals for being effete liberals.

George W. Bush, from Connecticut, affected a Texas accent but couldn’t even get sayings like “fool me once, shame on you; fool me twice, shame on me” right.

His father, George H. W. Bush in running for vice president in 1984, after debating his Democratic counterpart Geraldine Ferraro, was caught on microphone saying that “we tried to kick a little ass last night.” When Ferraro’s campaign challenged him on vulgarity (that was vulgarity back then) and sexism, Bush senior explained his remark as a “Texas football expression.” The Bushes were investment bankers in Ohio, and Bush senior’s father became a senator in DC, and he was, again, from Connecticut.

I remember reading a pundit at the time of the Ferraro brouhaha who explained that Bush senior was trying to sound working-class, but was tone deaf, what with having been born with a silver spoon in his mouth. You see, a real working-class guy would never have spoken like that about a woman.

Bush senior was running on a ticket with Ronald Reagan, from a middle class family who became a multimillionaire actor, and who once decried the Johnson administration’s war on poverty, denying that there was any hunger in America. He said, yes there is hunger in America–some people are dieting.

The Trumps may not be classy, but they wouldn’t know working-class if it fell on them like a meteor. Yet Donald J. Trump, the billionaire or at least multi-millionaire son of a New York real estate tycoon and grandson of a hotelier, affects a folksy way of talking to his Red State rallies. I suppose his obscenities, such as bragging about grabbing women by the pussy or calling African countries shitholes, are intended to ape the way he imagines his construction workers talk. And by the way, the myth of working class support for Trump is just that. He was elected by Republicans, and only about 14% of white working class voters who supported Obama in 2012 switched to Trump in 2016– a tiny minority who happened to be strategically placed with regard to the electoral college.

Trump is not only foul-mouthed himself (Tlaib told him to “put up a mirror” when he criticized her language) but his obscenity goes much deeper than language. There are Arab-Americans in Tlaib’s district who cannot see their loved ones because of Trump’s racist visa ban. He cut taxes on the super-rich, taking away key government services from people in the 13th District who need them to survive. The Federal workers at Detroit Metro in Wayne County are being made to work without pay and to risk losing their homes. Trump’s disdain for African-Americans is well-known, and I imagine most people in Detroit call him obscene names.

Tlaib represents people who lost their mortgages under a Republican president in 2008-9, and who never came back from that disaster. She represents African-Americans in Detroit who have been mechanized out of work. By this fall some 60 percent of Michiganders had a poor opinion of Trump, but that includes the red counties in the west of the state. Detroit and Dearborn Heights and Wayne County despise Trump with a passion. No Republican even dared try to run against Tlaib there.

These are, then, the voters who cast their ballots for Tlaib. They are beaten-down white workers and Arab-Americans fighting prejudice and African-Americans left behind by plutocrats like Trump. They work hard, eke out a living, and they cuss. They came by it honestly. They aren’t pretend working class like Trump or the Bushes. They put Rashida Tlaib in Congress for one purpose.

To impeach the Mofo, Trump.