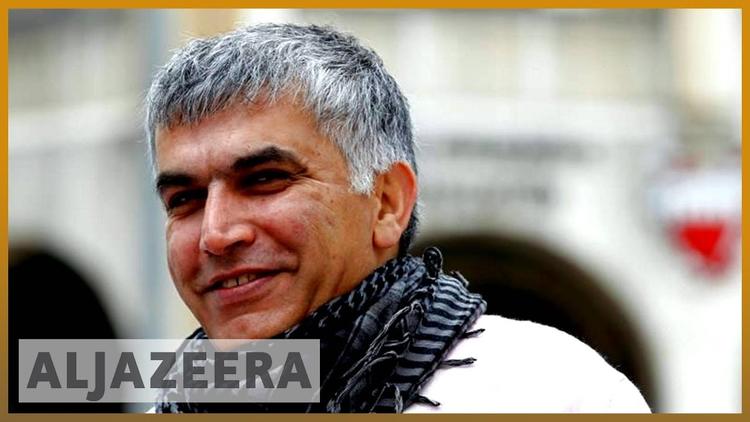 The sentence arose from comments criticizing torture in a Bahrain prison and the Saudi-led military campaign in Yemen. Rajab has already served two-years on other charges related to peaceful expression. The date of the hearing, scheduled for New Year’s Eve, raised concerns that the authorities intended to uphold Rajab’s conviction at a moment when it would attract minimal media scrutiny.

“Nabeel Rajab’s conviction for his refusal to stay silent on the government’s rights abuses is further proof of the Bahrain authorities’ flagrant disregard for human rights,” said Lama Fakih, deputy Middle East director at Human Rights Watch. “Nabeel Rajab should not have been arrested in the first place, and upholding his sentence is a grave miscarriage of justice.”

Rajab is one of dozens of human rights defenders, political activists, opposition leaders, and journalists unjustly imprisoned since the government quelled antigovernment protests in 2011.

Rajab is the head of the Bahrain Center for Human Rights (BCHR), deputy secretary general of the International Federation of Human Rights (FIDH), and a member of the Human Rights Watch Middle East and North Africa Advisory Committee.

Authorities first arrested Rajab on April 2, 2015 because of his tweets alleging torture in Bahrain’s Jaw Prison. He was released provisionally on humanitarian grounds on July 13, 2015, but re-arrested on July 13, 2016, for criticizing the Bahraini authorities’ refusal to allow journalists and rights groups into the country. A court sentenced him in July 2017 to two years for this criticism, which the Court of Cassation upheld on January 15, 2018. Rajab completed this sentence in July.

The Manama Appeals Court upheld Rajab’s five-year sentence on June 5. He appealed this decision on July 5.

On August 13, 2018, the United Nations Working Group on Arbitrary Detention (WGAD) published an opinion regarding the legality of Rajab’s detention. The WGAD concluded that the detention was not only arbitrary, as it resulted from his exercise of his right to free speech, but also discriminatory, based on his political opinions and status as a human rights defender. The WGAD therefore stated that Rajab’s detention violated the Universal Declaration of Human Rights, as well as the International Covenant on Civil and Political Rights (ICCPR), which Bahrain ratified in 2006. The WGAD requested the Bahraini government to “release Mr. Rajab immediately and accord him an enforceable right to compensation and other reparations, in accordance with international law.”

Rajab, who also spent eight months in pre-trial detention, appears at times to have been subjected to treatment that may amount to arbitrary punishment. He was held in solitary confinement for more than two weeks after his arrest in June 2016. His family said that Rajab is held in a cramped, dirty, and insect-infested cell at Jaw Prison, where he remains locked in his cell for 23 hours a day. During his detention, Rajab’s health deteriorated. He has had several surgical procedures, suffered heart palpitations that led to hospitalization, and developed other medical conditions, including a low white blood cell count, his family said. Bahrain should undertake a prompt, impartial, and independent investigation into his allegations of ill-treatment in detention.

“Bahrain has chosen to mark the new year by entrenching it attacks on human rights defenders and undermining free expression,” said Fakih. “But Bahrain cannot hide its abuses from public critique by jailing dissidents. Bahraini rights defenders are not backing down.”