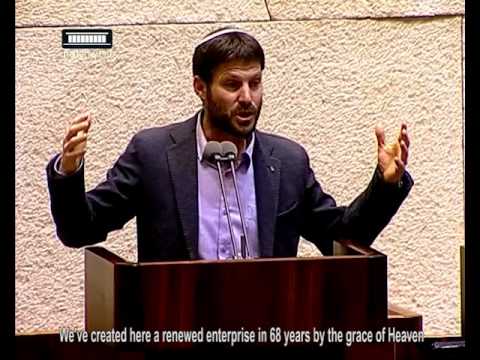 (Middle East Monitor) – An extreme right-wing member of the Israeli parliament, the Knesset, has been elected to lead a faction of the Jewish Home party. Bezalel Smotrich MK is renowned for his pro-settlement views.

Smotrich, who currently serves as the Deputy Knesset Speaker, was elected yesterday to head the National Union, an extreme faction of the already right-wing party. Speaking after his victory, Smotrich called on the Jewish Home factions to run as a collective unit in Israel’s General Election on 9 April: “Let’s connect again, this is a time for unity. I hope you can quickly stabilise this rocky ship. Get your slates in order and let’s reunite.” According to Haaretz, he added his belief that religious Zionism is the most influential movement in Israel and insisted that it will continue “in full force”.

Though Smotrich’s election means that he will head the National Union – itself an amalgamation of several small religious-Zionist parties, including Tekuma and Moledet — it is not yet clear whether Jewish Home will reshuffle itself to place National Union first on the election ticket. Jewish Home is to hold a conference tomorrow to discuss its options.

The far-right MK has been quick to express an interest in heading the whole Jewish Home bloc, with the Jerusalem Post reporting that, if he is successful in this bid, he will try to unite with “the extremist Otzma Yehudit list, led by Hebron activist Baruch Marzel, the former right-hand man of Rabbi Meir Kahane.” A supporter of Kahane, Baruch Goldstein, was responsible for carrying out the Ibrahimi Mosque massacre in 1994, in which 29 Palestinians were killed while they were at prayer in the Hebron mosque. Kahane’s Kach Party was banned by the Israeli government in the late 1980s for being “racist”.

Israeli minister: no to a Palestinian state.

Smotrich beat Israel’s Agriculture Minister, Uri Ariel, to the position with a landslide vote of 83 – 40, meaning the latter will likely retire from Israeli politics altogether. The choice of Smotrich over Ariel – who himself has a long history of provocative actions and pro-settlement views – will likely be interpreted as an indication of the faction’s intention to appeal to the more extreme right-wing elements of Israel’s electorate.

The Times of Israel interpreted Smotrich’s victory as “represent[ing] a choice between an older, establishment guard in Ariel and a younger, anti-establishment activist generation represented by Smotrich.” The newspaper pointed out that Smotrich has formed a number of alliances with young, pro-settlement figures in the occupied West Bank, including Yossi Dagan and Yisrael Gantz – both chairmen of illegal settlement councils – who have been vehement in their criticism of the Israeli government under Prime Minister Benjamin Netanyahu.

Moreover, Smotrich’s ties with the illegal settlement movement were thrust into the spotlight in December when Israeli human rights organisation Yesh Din demanded that an investigation be opened into his social media incitement. Yesh Din asked Israel’s Attorney General, Avichai Mandelblit, to open a criminal probe into a tweet in which Smotrich called on illegal Israeli settlers in the occupied West Bank to attack Palestinian vehicles on Route 60, south of Nablus.

That night, scores of Israeli settler youth went to Route 60 to throw stones at passing Palestinian vehicles, forcing them to leave the road in order to avoid further damage or injury. Video footage showed masked settlers throwing stones at Palestinians’ windshields, before continuing down the road to target more vehicles. The incident came in a week marred by violence across the occupied Palestinian territories, and highlighted the influence that Smotrich holds over Israel’s illegal settlers.

The MK also caused controversy in April last year by suggesting that teenage Palestinian activist Ahed Tamimi should have been shot. Shortly after Tamimi was sentenced to eight months in prison for slapping an Israeli soldier who trespassed on her family’s land, Smotrich tweeted that, “in [his] opinion, she [Ahed] should have gotten a bullet, at least in the kneecap. That would have put her under house arrest for the rest of her life.” In response, Twitter temporarily suspended the MK’s account, saying that it had “determined that the post was abusive and could incite people to harass, terrorise or silence an individual.”