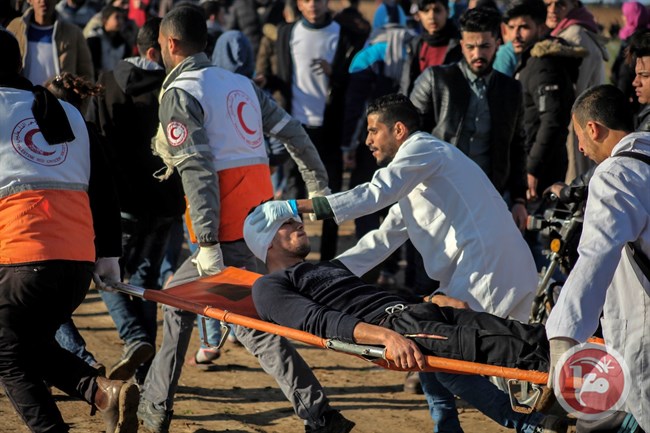 BETHLEHEM (Ma’an) — More than 250 Palestinians were killed by Israeli army gunfire and over 23,000 were injured since the start of “The Great March of Return” protests in the Gaza Strip on March 30th until the end of last year, according to a report by the United Nations Office for the Coordination of Humanitarian Affairs (OCHA) in the occupied Palestinian territory.

OCHA published a report on Monday, stating, “Since 30 March 2018, the Gaza Strip has witnessed a significant increase in Palestinian casualties in the context of mass demonstrations and other activities along Israel’s perimeter fence with Gaza, taking place as part of the Great March of Return, as well as during hostilities and access related incidents.”

OCHA confirmed that “254 Palestinians were killed in Gaza between March 30 and December 31, among them 180 killed during the March of Return protests at the Gaza border with Israel and the rest in other circumstances but also by Israeli gunfire. Among those killed 44 were children and four were women.”

The report pointed out, “23,603 Palestinians were injured during the same period, almost all of them during the March of Return protests and included 5183 boys, 464 girls and 1437 women.”

“The largest number of fatalities and injuries occurred in May (80 deaths and 5981 injuries) during mass protests against the relocation of the United States embassy in Israel from Tel Aviv to Jerusalem.”

OCHA stressed, “The large number of casualties among unarmed Palestinian demonstrators, including a high percentage of demonstrators hit by live ammunition, has raised concerns about excessive use of force by Israeli troops. Exposure of children to violence and lack of protection for medical teams are also of concern.”