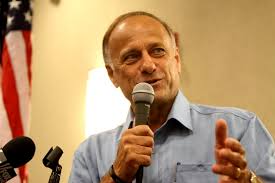 Ann Arbor (Informed Comment) – House Republican leader Kevin McCarthy on Monday stripped Rep. Steve King (R-IA) of all his committee assignments, leaving him a fifth wheel with nothing to do in Congress.

The phrase “white supremacist” was what finally goaded the GOP into disciplinary action, after winking at King’s racist and xenophobic remarks for years.

Iowa senators Iowa Sens. Chuck Grassley and Joni Ernst, both of whom had campaigned with King as recently as this past fall, abruptly denounced him.

King has for years backed a border wall with Mexico and proposed it be built with funds appropriated from Planned Parenthood. The stupid wall idea is if anything more offensive than the mere phrase “white supremacy,” though they come to much the same thing.

About 5.6 percent of Americans, some 11 million people, are white supremacists. Many politicians in the Republican Party have been seeking this constituency at the polls for decades. Many political races in the United States are very close, with only two or three percent separating the candidates. When Republicans can attract white supremacist votes, they can add a crucial few percentage points in elections and snatch victory from the jaws of defeat.

Initially their way of achieving this smelly success had been to use dog whistles of various sorts, putting out the call to the white nationalists without explicitly adopting their racist hate speech. Especially after the racist “Nixon Strategy,” in which the Republican Party sought to pick up traditionally Democratic white southerners, the dog whistle became crucial. It is incredible that over a century and a half after the Emancipation Proclamation, white southerners keep their caste system going, mostly declining to intermarry with African-Americans or to share a church or a political party with them, and that they have de facto re-segregated K-12 schools. African-American households typically have one tenth the wealth of white households (the average white family’s median wealth is $171,000, that of African-Americans is $17,600) and have Third World health statistics on things like infant mortality.

The campaign manager for George H. W. Bush in the 1988 campaign against Mike Dukakis used a furlough program in which an African-American inmate had been let out and committed a rape. Lee Atwater vowed to “strip the bark off the liberal bastard” Dukakis and make “Willie Horton his running mate.”

Just watch the ad. There isn’t any doubt that the campaign was racist (the implication was that the rape was of a white woman, so this was an indirect political lynching of Dukakis). Atwater said it was about economics, but then a white inmate who committed a crime on a furlough could have been deployed. (The furlough program was Republican in origin and had nothing directly to do with Dukakis, who inherited it and did not decide on particular furloughs).

The George W. Bush campaign in the Republican primaries of 2000 had help from a group that sent robo-calls to South Carolinian voters with a phony poll that asked “How would you feel about John McCain if you knew he had fathered a black child out of wedlock?” McCain and his wife had adopted a baby girl from Bangladesh and treated her cleft palate, and pictures had circulated of her with McCain, and these pond scum publicists tried to use the image against McCain with white racists in South Carolina. Bush won the South Carolina primary.

The tech billionaire Robert Mercer, who infused the obscure Breitbart neo-Nazi toilet paper of a webzine with enough cash to turn it into a phenomenon, backed Steve Bannon, who hooked up with Trump.

Trump was the first Republican presidential candidate to cross over from a more subtle sort of dog whistle to reviving 1940s style racial slurs and sterotypes in public. In some ways Rep. Steve King and others of his ilk had paved the way for Trump to be acceptable to Republican primary voters.

We are now at the point where Trump has made the 11 million white supremacists fairly central to his leadership of the Republican Party, and punishing Steve King with no committee assignments is a feeble response on the part of mainstream Republicans.

Party leaders need to denounce Trump’s anti-Mexican racism, which is the foundation of his peculiar demand for a border wall with Mexico. This demand has nothing to do with national security, or he would be demanding a wall with Canada, too. He doesn’t care about blue-eyed undocumented immigrants.

The only way Republicans can avoid being taken over by the Neo-Nazis the way they were previously taken over by the Evangelicals is to make a clean break with Trumpism and Breitbartism and Mercerism. And the way to do that is to join the Democrats in saying “Hell no!” to Trump’s racist wall. Together, mainstream Republicans and the Democrats could pass a budget, reopen the government, and override Trump’s veto.

That step would show that McCarthy and other Republicans are serious about repudiating the white supremacist wing of the party. Otherwise, the punishment of Rep. King is a minor sideshow, no more than rearranging the deck chairs on the Titanic.

Featured Photo: Creative Commons License: “Steve King at an event in Ames, Iowa.”
Date 11 August 2011; Source Own work; Author: Gage Skidmore Permission
(Reusing this file): Must attribute to Gage Skidmore if used elsewhere, other than on Wikimedia and its projects.