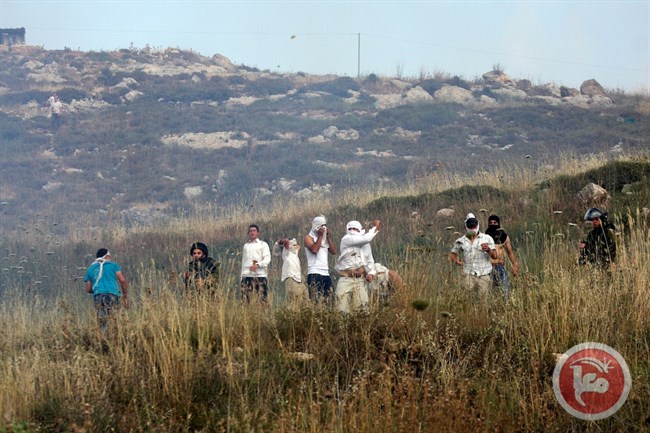 Hamdi Taleb Na’asan, a 38 year old farmer, was killed by Israeli settlers in the West Bank village of al-Mughayer.

Israeli settlers shot and killed a Palestinian man in the occupied West Bank on Saturday, Palestinian officials and the Israeli military said.

The incident followed a confrontation between settlers and Palestinians near the city of Ramallah in which a settler was lightly injured, the Israeli military said.

“Initial details suggest that shortly thereafter, a conflict erupted between Israeli civilians and Palestinians in the area, in which live rounds were fired by the civilians [settlers]. One Palestinian died and several others are injured,” the military said in a statement, adding that an investigation has begun.

The Palestinians said the settlers had entered the village of al-Mughayer and that its residents tried to fend them off. The Israeli military said its forces dispersed the crowds. The Palestinian Health Ministry said that Hamdi Taleb Na’asan, a 38 year old farmer, was killed and that nine other people were wounded by gunfire.

“The Israeli Government is continuing its policy of escalation,” Abbas said in a statement published by the official Wafa news agency. “This will lead to serious consequences, further tension and the creation of a dangerous and uncontrollable atmosphere.”

Peace talks between Israel and the Palestinians broke down in 2014, and a bid by US President Donald Trump to restart negotiations has so far shown little progress.

The Palestinians want to establish a state in the West Bank and the Gaza Strip with a capital in east Jerusalem, territories Israel captured in the 1967 Middle East War.

Israel annexed east Jerusalem in a move unrecognized abroad and in 2005 pulled its settlers and army out of Gaza. It maintains a blockade of the territory, which is controlled by the Hamas movement.

In the West Bank, the Palestinians have limited self-rule and most of the territory is controlled by Israel. Most countries view the settlements Israel has built there as illegal – a view that Israel disputes, citing biblical, historical and political ties to the land.