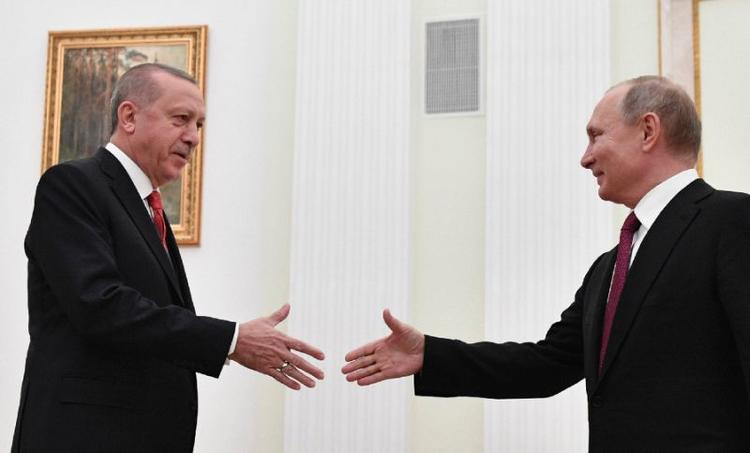 Moscow (AFP) – Russian President Vladimir Putin and his Turkish counterpart Recep Tayyip Erdogan at a meeting in Moscow on Wednesday vowed to coordinate their actions more closely in Syria.

“Cooperation between Russia and Turkey is a touchstone for Syrian peace and stability,” Erdogan said in translated comments at a joint press conference after their talks, which lasted around three hours.

“With our Russian friends we intend to strengthen our coordination even more.”

“We agreed how we’ll coordinate our work in the near future,” Putin said, calling the talks which included the countries’ defence ministers “effective”.

At the start of their meeting in the Kremlin, Putin addressed Erdogan as “dear friend,” saying that their countries “work on issues of regional security and actively cooperate on Syria”.

Erdogan used the same term for Putin and said “our solidarity makes a weighty contribution to the security of the region”.

The two leaders are on opposite sides of the Syria conflict: Russia provides critical support to the Syrian government, while Turkey has backed rebel groups fighting President Bashar al-Assad’s forces.

Despite this, they have worked closely to find a political solution to the seven-year conflict.

Putin said that if carried out, the withdrawal of US troops from northeastern Syria “will be a positive step, it will help stabilise the situation in this restive area”.

Turkey has also welcomed Washington’s planned withdrawal, but the future of US-backed Kurdish militia forces labelled terrorists by Ankara has upset ties between the NATO allies.

Erdogan had said on Monday he would discuss with Putin the creation of a Turkish-controlled “security zone” in northern Syria, suggested by Trump.

The US-allied Kurds, who control much of the north, have rejected the idea, fearing a Turkish offensive against territory under their control.

Putin said Wednesday that Russia supports “establishing dialogue between Damascus officials and representatives of the Kurds”.

The northwestern province of Idlib earlier this month fell under the full control of a jihadist group dominated by Syria’s former Al-Qaeda affiliate.

The Russian foreign ministry said earlier Wednesday that the situation in the province remained of “serious concern”.

Putin said that the leaders discussed the situation in Idlib “in great detail today.”

“We have a shared conviction that we must continue jointly fighting terrorists wherever they are, including in the Idlib zone,” the Russian leader said.

Erdogan said that the countries will wage a “lengthy fight” in Syria.

Nearly eight years into Syria’s deadly conflict, the planned US pullout has led to another key step in Assad’s Russian-backed drive to reassert control.

Kurdish forces who were left exposed by Trump’s pledge to withdraw have asked the Syrian regime for help to face a threatened Turkish offensive.

The Kremlin hailed the entry by Syrian forces into the key northern city of Manbij for the first time in six years after Kurds opened the gates.

Moscow plans to organise a three-way summit with Turkey and Iran early this year as part of the Astana peace process, launched by the three countries in 2017.

Putin said Wednesday the next summit would be held “in the near future” in Russia, saying the leaders still needed to agree the time and location with Iran.

The last meeting between Putin, Erdogan and Iran’s Hassan Rouhani took place in Iran in September last year with the fate of rebel-held Idlib province dominating the agenda.

Ties between Russia and Turkey plunged to their lowest level in years in November 2015 when Turkish forces shot down a Russian warplane over Syria.

But after a reconciliation deal in 2016, relations have recovered at a remarkable speed with Putin and Erdogan cooperating closely over Syria, Turkey buying Russian-made air defence systems and Russia building Turkey’s first nuclear power plant.