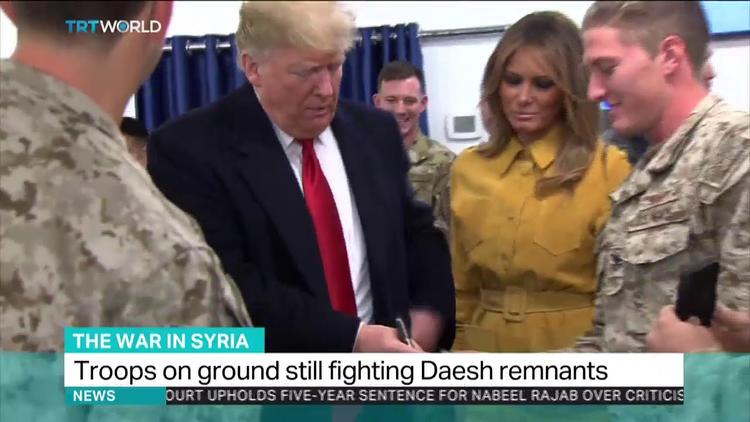 Juan Cole (Informed Comment) – The primary post 9/11 paradigm of US foreign policy has been the war on terrorism, which is to say a profound and kinetic military and counter-insurgency engagement of the US Pentagon, CIA and State Department in the Greater Middle East. This paradigm succeeded the Cold War paradigm of 1946-1991, which collapsed when the Soviet Union did.

There are some signs that the War on Terror paradigm in US foreign and military policy may be winding down. Trump is trying to get out of Syria, and though the Washington Establishment may succeed in putting some brakes on the withdrawal, it seems likely that Trump mostly will get his way before summer. He obviously would also like to pick up stakes and get out of Afghanistan, though whether he can get his way there is unclear. Trump, by starting back up the US-Iranian Cold War has ticked off a lot of Iraqi Shiites, who may not want the current 6,000 or so US troops based in Iraq to stay very much longer. The powerful Shiite militias in particular squawked about the humiliation of having Emperor Trump hold his durbar for American troops at a base in al-Anbar but completely ignore actual Iraqis.

Not only are there neo-isolationist currents in the American heartland and among the Libertarian fraction of the business classes, but the anti-imperialism of the 2018 New Left may also push in that direction. Bernie Sanders sponsored a successful Senate resolution urging a US withdrawal from the Saudi-led Yemen War.

Trump has cut off hundreds of millions of dollars of aid from Pakistan, and in any case that country’s security situation has very substantially improved over the past year, with a 45% decline in militant attacks. Islamabad has for decades two-timed the US with China and China with the US, without anyone minding very much (Ronald Reagan even used Pakistan as a conduit to Beijing). But with China’s $39 billion CPEC program, a central part of its “One Belt, One Road” expansion of Asian transportation and pipeline infrastructure, Pakistan may be swinging firmly into the Chinese sphere of influence. (Even if CPEC is, as some warn, a debt trap for Pakistan, that would have the same effect of more closely binding Islamabad to Beijing).

Perhaps a straw in the wind was that in one week of December MSNBC defeated Fox “News” in the key demographic for the first time since 2000.

While the emergence of the War on Terror during the past 18 years might seem understandable in the light of the terrorism threat posed by al-Qaeda, in fact the policy is suspiciously self-serving for Washington hawks who had been in the wilderness in the Clinton era (when, aside from a police action in Kosovo, the US was not at war anywhere in the world, posing a profound challenge to the US arms industry that it met by a) selling dangerous weapons abroad and b) secretly lobbying for more US wars).

The “War on Terrorism” should not by all rights have involved severe boycotts and minor Gulf naval jousting with Iran, since Shiite Iran is threatened by Sunni-Salafi extremism of the al-Qaeda sort. (Iran went on to play a central role in defeating ISIL, an al-Qaeda offshoot, in Iraq). A real war on terrorism would have involved a US-Iran alliance against Sunni-Salafi extremism. It is not as if Saudi Arabia or Turkey were going to be of much help here (nor Israel, which in recent years actually allied with a Syrian al-Qaeda affiliate against Hizbullah in the Golan).

Likewise, the “War on Terrorism” should not by all rights have involved a $6 trillion invasion and occupation of Iraq, which had nothing to do with al-Qaeda. A wise such policy would have gotten out of Afghanistan after the Taliban were overthrown, save that then Secretary of Defense Donald Rumsfeld wanted to use Afghanistan as a picket in a new picket fence surrounding the Russian Federation in hopes of keeping it weak and contained. The deep involvement of the US in Pakistan once the Taliban managed a resurgence that the massive foreign troop presence made easier for them (Talibanism is in part about a religious-right version of Afghan nationalism). Taliban emerged among Pakistani Pushtuns in the tribal belt and struck throughout the country, threatening to destabilize further the northern reaches of South Asia.

None of this had very much to do with al-Qaeda, which was always vastly over-estimated as a threat. People are much more likely to slip in their bathtubs and die that way than ever to be affected by al-Qaeda terrorism.

One reason al-Qaeda was so extensively hyped was that it, being shadowy, was the perfect McGuffin for the military-industrial complex, and could justify massive military expenditures. Another is that it was actually a small weak little terrorist organization mainly active in small weak little countries, where victories of various sorts for ambitious generals and diplomats were not so hard to come by (even if the big over-arching endeavors like the Iraq War were a bust and destroyed careers of civilian politicians).

In contrast, an actual adversary like nuclear-armed North Korea offered no prospect but a stand-off. Despite what the China hawks say, China is more like the G-8 in seeking stability and trade than like an adversary, and anyway it is also nuclear-armed, which means Boeing and Lockheed-Martin can’t make any money manufacturing bombs to drop on it. It is utterly unlike Iraq, Syria, Afghanistan, Pakistan, Somalia, Libya, Niger etc. etc.

The problem with the War on Terrorism paradigm, however, is precisely that it is not very robust intellectually and full of contradictions. If the Middle East is so threatening then why are Morocco, Tunisia, Egypt, Jordan, Saudi Arabia and the whole GCC, and Pakistan such strong allies of the US? You couldn’t find so many counterparts to them anyplace but Europe. If they produce some citizens who are terrorists, so do most European countries. So does the United States, which has a big and growing problem of heavily armed white nationalist militias who are establishing international connections with their European equivalents.

And, why does the US public absolutely ignore the enormous continent of South America and pay relatively little attention to the even more massive continent of Africa or to the huge region of Southeast Asia? Except when there is a change of government do you ever even hear anything about them on American t.v.? (Marx is outdated. Nowadays it is Cable Television News that is the opiate of the people, misinforming them in some instances [Rupert Murdoch] or misdirecting them by big silences on issues like Palestine in other instances [CNN]). I’m not urging neo-imperialism in those areas (of course), simply pointing out that the obsession with the Middle East is peculiar.

The Middle East has had a lot of turmoil, but the great Congo Wars of 1996-2003 involved dozens of countries and left 3 million dead, and it was for the most part studiously ignored. You have to wonder if that would have been the case if Congo had more petroleum. Because surely petroleum is what is actually driving much of the peculiar American stalking of the Middle East (that, and the quixotic quest to shore up Israeli settler colonialism in the Levant– which is probably important to most US WASPs mainly because they view Israel as a sort of aircraft carrier that might be useful in keeping the oil flowing to American allies).

The writing is on the wall for the War on Terrorism paradigm, not only for the reasons mentioned at the beginning of this essay, but because petroleum won’t be important very much longer. Some 70% of the petroleum pumped is used for vehicle fuel. Dozens of electric cars are poised to debut over the next few years, and their prices are falling rapidly and their range is increasing hugely. By 2022 some experts expect a tipping point where cost and range are so acceptable to consumers that there is a run on the electric cars. And the run will be much more massive than most marketers can now imagine. (Remember, in 2004 there were no iPhones and now the world is full of them). When it happens, no American generals will care more about the Mideast Gulf than about Suriname or Senegal. We’re talking a ten to fifteen year window for the American obsession with petroleum, and interest will likely begin trailing off way before then.

Trumpism is only one corner of this epic story, but may play the role of accelerant.

TRT World: “US will gradually withdraw forces from Syria – Trump”