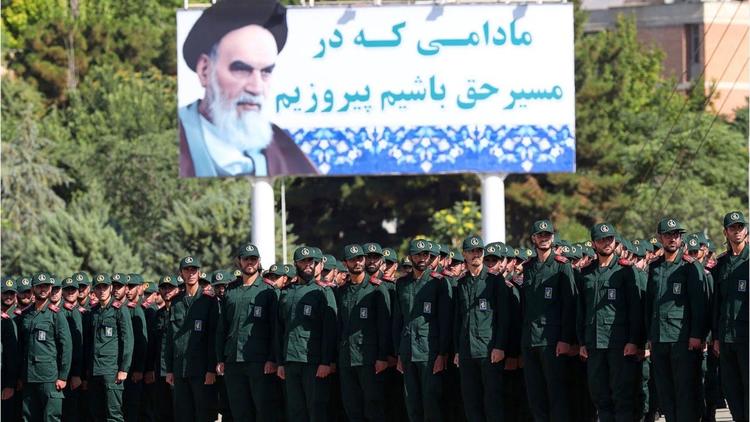 Ann Arbor (Informed Comment) – Aftab reports that the head of the political bureau of the Iranian Revolutionary Guards Corps, and a liaison to clerical Leader Ali Khamenei, Brig.-Gen. Yadollah Javani, gave a speech Monday in which he said that Iran has nothing to fear from the United States.

He also said that that last means the enemy has for stopping Iran is negotiations, and hence, Iran would never negotiate with the United States on any issue. He observed that the US wanted to stop Iran’s missile tests. But since, he said, the US in not in a position to attack Iran militarily, there is no reason for Iran to enter into new negotiations.

Iran’s only path, he said, is resistance, resilience and working toward prosperity.

He said that “if Iran had had its present defensive capability in the year 59 (1980), no country would have dared launch an attack on us. On the eve of the beginning of the fifth decade of the revolution, the country of Iran has achieved a position such that no power or nation is able to attack or agress against us. America, with all of its defensive capabilities and its military, does not dare fire a single bullet in our direction. For America knows that if it attacks us, Tel Aviv and Haifa will be merged with the dirt.”

Because of the charged political atmosphere in Washington, DC, with regard to all things Iranian, it is necessary to underline that Javani did not threaten to attack Israel in a first strike. He threatened to hold it hostage if the United States did to Iran what it did to Iraq and launched a war of aggression on Iran. Israel has at times during the past decade been close to bombing Iran itself and prime minister Binyamin Netanyahu has been a constant agitator both in Congress and the White House for an American war on Iran.

Javani is not actually in a command position in any case, and cannot order military action. He has in the past stressed that Iran does not seek a military confrontation with Israel. His remark is braggadocio and should not be taken seriously.

The commander in chief of the Iranian armed forces, clerical Leader Khamenei, has repeated affirmed a policy of no first strike and no initiation of aggression toward any other country (i.e. he, unlike George W. Bush, rejects the idea of preemptive war).

The US government itself translated Khamenei’s 2005 speech in which he said,

“We will never start a war. We have no intention of going to war with any government. We have a high aspiration and we will use all our energy to reach it. That aspiration is to build an Iran which provides this nation with moral and material prosperity. We want an Iran that can be a role-model for all other nations.”

Nothing has changed. Iran did lend the Syrian government help against the rebels (including against al-Qaeda-linked-groups and ISIL), but that was at the invitation of Damascus. Iran hasn’t invaded another country militarily and aggressively at least since the Afghanistan campaign of the 1850s, and possibly since Karim Khan Zand took Basra in 1775.

Netanyahu, facing being indicted for corruption and a tough re-election campaign, took advantage of Javani’s bluster to return it in kind. He said, according to The Guardian,

“Were this regime to make the terrible mistake of trying to destroy Tel Aviv and Haifa, it would not succeed, but it would mean that they had celebrated their last Revolution Day. They would do well to take that into account.”

Both of these politicians are behaving like five year olds. Iran has no air force to speak of and its missile tests keep failing, and it has nothing very powerful to put in the nose of the missiles it doesn’t have. It can’t do anything to Tel Aviv and Haifa. If Javani was referring to Hizbullah and its little katyusha rockets, that is not a real military threat, though it could have psychological effects. Plus, Haifa has a large Palestinian-Israeli population, and either Javani is ignorant of his own neighborhood or he just threatened these Muslims, as well.

As for Israel, it has a fine, well-equipped and well-trained military and could defeat Iran in a conventional encounter even though Israel has a population of 6 million Jewish citizens (the Muslim Israelis don’t serve in the military with the exception of the Druze) and Iran has a population of some 80 million. But Israel can’t overthrow the Islamic Republic; that is ridiculous. And if Netanyahu is threatening to nuke Iran, the reputational blowback on Israel from that would be economically fatal (if you want to see BDS, just even threaten to behave that way).

Netanyahu’s worst nightmare is for Iran to go for broke to get its own nuclear warhead. Iran has never wanted such a thing, though it did likely want to instill fear in its enemies that it could rapidly go in that direction, to deter an attack. The best guarantee against Iranian proliferation was the Joint Comprehensive Plan of Action, the 2015 Iran deal concluded with the UN Security Council nations. Netanyahu has succeeded in convincing his allies in Washington to trash that treaty. And now Netanyahu is threatening to destroy Iran. Why, you’d almost think he wanted to pressure Iran into trying to break out with regard to a nuclear capability.

Wochit News: “Iran: ‘We Will Raze Tel Aviv To The Ground’ If U.S. Attacks ”