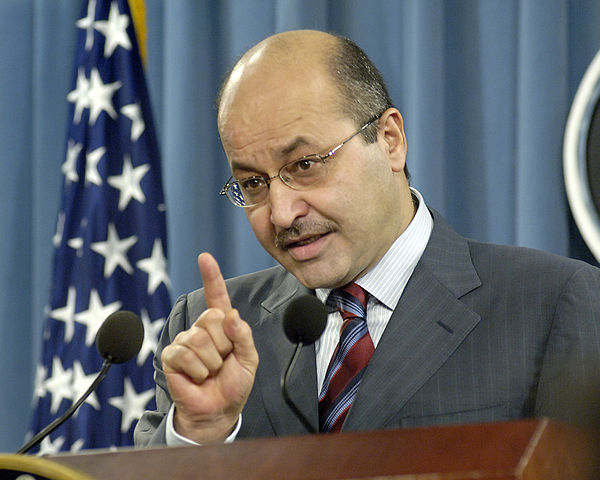 Ann Arbor (Informed Comment) – Trump’s assertion that he intends to keep US troops in Iraq to spy on Iran has produced a firestorm of protest and controversy in Baghdad. Trump also committed the faux pas of saying the US had constructed an enormous military base in Iraq, which contradicts the Iraqi government’s line that the US merely uses *Iraqi* bases. Leaders of powerful Shiite militias that have become political parties with substantial representation in parliament demanded that US troops immediately withdraw.

There were also Shiite militia threats against US military personnel. That is, Trump’s bumbling ineptitude has painted a big red X on the backs of American troops in Iraq. If US forces aren’t gathering intelligence on Iran, then Trump has smeared them and deeply endangered them with a falsehood. If they are, it was a covert operation and Trump has revealed classified information to the enemy and should be charged with treason.

President Barham Salih, a seasoned politician of Kurdish heritage who in the past has been favorable to the US, rejected Trump’s statement out of hand. According to al-Zaman (The “Times” of Baghdad), , Salih said, “The Iraqi constitution prohibits taking Iraq as a base to strike or engage in aggression on neighboring countries.” He added, “The existence of American forces is within legal frameworks and by an agreement between the two countries, and any operation outside this agreement is unacceptable.”

The Iraqi government had insisted that US troops leave the country in 2011 after an 8 1/2 year brutal military occupation, but agreed to their return in summer of 2014 because of the rise of ISIL, which detached 40% of Iraqi territory and caused the Iraqi army to collapse. There are about 5,000 US troops in Iraq, in bases in Baghdad and al-Anbar Province in the west of the country. The rationale for Iraq to host them is that they are helping clean up the remnants of ISIL in northern and western Iraq, largely Sunni Arab areas of the country.

Embed from Getty Images
“BAGHDAD, IRAQ – SEPTEMBER 03: …opening session of New Iraqi parliament at the Parliament Building on September 03, 2018 in Baghdad, Iraq. The newly-seated Iraqi Parliament convened on Monday for the first time since the May 12 parliamentary elections. (Photo by Haydar Karaalp/Anadolu Agency/Getty Images).”

Member of parliament Sabah al-Saedi, from the Sa’irun Bloc of Shiite cleric Muqtada al-Sadr, said that “A law expelling the American forces from Iraq has become a national necessity after Trump’s statements.”

Qays al-Khaz`ali, leader of the radical Shiite League of the Righteous militia, said that Iraqi security forces and the Shiite militias could expel US forces in the dark of the night, even if there were 9,000.

Embed from Getty Images
“Leader of the Asa’ib Ahl al-Haq, one of the units of the Hashed al-Shaabi (Popular Mobilisation units), Qais al-Khazali talks to the press during the Rafidain Center for Dialogue (RCD) Forum in Baghdad on February 04, 2019. (Photo by SABAH ARAR / AFP) (Photo credit should read SABAH ARAR/AFP/Getty Images).”

The Iraqi government insists that there are no exclusively American bases in the country. Rather, US troops act as trainers and are embedded with Iraqi troops on Iraqi bases.

The deputy speaker of the house, Hasan al-Kaabi (another Sa’irun stalwart), said, “Iraqi will never be the springboard for an attack on or for surveillance of any country, and everyone must mobilize to end the American presence.”

Al-Ka`bi added, “Once again Trump has violated the legal and constitutional norms of the Iraqi state, after his visit to the Ayn al-Asad base. Today, he visited on us a new outrage with his statement affirming that US troops will stay in the country in order to commit aggression against a neighboring country.”

Al-Kaabi addressed the American president, saying, “Iraq is not your father’s estate, and we will never allow any foreign troops on our soil.”

The opposition Kurdish MP Sahrhut Shams al-Din said on Twitter that “Iraqi is not an arena for any foreign state against another. We expect the United States to respect our interests and to avoid pushing Iraq into a regional struggle.

He said, “The mission of the American army in Iraq is to help the Iraqi security forces against terrorism. It is not to monitor others.”

Muhammad al-Muhyi, affiliated to another Shiite militia, said that Trump’s statement was tantamount to the reoccupation of Iraq.

Featured Photo: US Department of Defense.