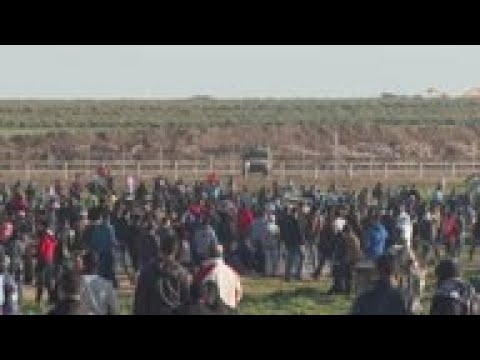 The lack of action to bring Israel to account for more than seven decades’ worth of crimes against the Palestinian people is obvious. “Enough is enough” is an overused phrase, but in the case of the people of occupied Palestine, it does not even scratch the surface in terms of expressing their outrage at the hypocrisy of the international community.

Nevertheless, there has indeed been more than enough dispossession, land theft and refugees languishing in camps since the 1948 Nakba; at least 5 million of them. And we have had enough of being demonised by Israel, which portrays itself as the victim, labels the real victims as terrorists and imposes laws which define it as an apartheid state.

Enough is enough when it comes to Israel’s abduction of children in the middle of the night and their murder and maiming at the nominal border of the besieged Gaza Strip. Are Palestinian lives really that worthless?

Two Palestinian children were gunned down by Israeli snipers in Gaza last Friday, shot in the chest as if they were target practice for the terrorists masquerading as soldiers. There has been not one condemnation by the so-called civilised world; an EU spokesperson, however, sent condolences to Israel. Furthermore, that ignoble terrorist state is lauded by the West, whose politicians find excuses for its criminal behaviour, including war crimes and crimes against humanity.

We’ve had enough of hearing that Israel is “the only democracy in the Middle East” and “we share the same values.” Really? Since when have Western democratic values included ethnic cleansing, land theft, abductions, the wanton killing of unarmed women, children and medics, and colonialist occupation?

Israel exists in a difficult neighbourhood, we are told, and is therefore entitled unconditionally to act in “self-defence”. Enough of such craven nonsense. Try telling that to the families of 14-year-old Hassan Shalabi, 18-year-old Hamza Ishtiwi or 21-year-old medic Razan Al-Najjar, none of whom posed any threat to the Israeli snipers who murdered them.

Not only are Israel’s crimes explained away and even condoned by the West, perhaps with some concern for Palestinian suffering thrown in for PR purposes, but its allies also think that we can all learn something from its success as a “start-up nation”; they don’t — daren’t — mention its contempt for international laws and conventions. In the Trump era, trade deals and the demands of the pro-Israel lobby push respect for the law and human rights aside every time. It has been this way in the US for decades.

US Secretary of State Mike Pompeo went further than most supporters of Israel, though, when speaking at the annual Jewish Institute for National Security of America (JINSA) dinner in Washington, describing Israel as “everything we want the entire Middle East to look like going forward.” According to Pompeo, it is “democratic and prosperous, it desires peace, it is a home to a free press and a thriving economy.” Such sycophancy by a senior US official is sickening.

Across the Atlantic, admiration for Israel is not lagging far behind America’s. Britain’s Foreign Secretary, Jeremy Hunt, told a recent Conservative Friends of Israel event that their favoured state is a shining beacon of democratic values. He did not criticise any of its policies or utter the word occupation, and hardly mentioned the Palestinians at all.

The Fence: Scenes from a Palestinian tragedy

Hunt’s colleague, International Business Secretary Liam Fox, was quick off the mark to announce a trade deal with the Apartheid state at Davos. “As Britain prepares to leave the European Union and to ensure continuity for our businesses in both directions,” he explained, “we’ve reached agreement in principle with our colleagues in Israel.”

While the western world, especially the US, rushes to strengthen ties with Israel to benefit from billions of dollars in trade, it throws the Palestinian Authority some crumbs especially to maintain security cooperation with the occupation state, while cutting desperately needed humanitarian aid. Gaza is being kept just away from the brink of total collapse, while the PA is starved of funds unless it agrees to the “surrender of the century”.

Where the West has been consistent is in documenting Israeli policies and crimes against the Palestinians. Our daily suffering is well documented by the United Nations Office for the Coordination of Humanitarian Affairs, OCHA. Every Israeli atrocity is noted, although too many in Israel and beyond believe that such “achievements” are essential.

The usually incompetent Middle East Quartet is actually adept at writing reports. Again, Israel’s breaches of international law are documented and concern is expressed in international forums. However, that really does not justify the existence of this dysfunctional organisation, which has not brought peace any closer to reality.

The EU is a significant contributor to the Palestinian Authority as well as a key trading partner with Israel. While the twitter feed of its office in Israel reads like the Zionist state’s biggest fan, the EU too produces reports; its most recent documents Israel’s illegal settlement expansion: “The total advancement of settlement units in 2018 (January-December) amounted to more than 15,800 units (9,400 units in the West Bank and 6,400 units in East Jerusalem). The figures show a sharp spike in planning for future construction. This development will, over several years, enable potentially more than 60,000 Israeli settlers to move to the Occupied West Bank, including East Jerusalem.”

Sadly, though, the EU will not impose sanctions on Israel for planning to move 60,000 Israelis into illegally occupied Palestine in contravention of international law. This is an organisation, remember, which did not bat an eyelid when Israel destroyed class rooms used by Palestinian children last year which had been funded by European taxpayers.

The EU can act to ban settlement goods to signal that it records Israeli violations and settlement building but will not contribute to their development. If 27 countries can frustrate Britain’s Brexit strategy, they can act against Israel. It should feel under pressure. Its football clubs should be expelled from UEFA and its hosting of the next Eurovision song contest in May should be cancelled.

Let us insist that enough really is enough when it comes to the world’s double standards and hypocrisy over Israel’s violations against the Palestinians. That’s enough of documenting Palestinian suffering and Israeli atrocities while providing the aggressor with complete impunity. It is time for action to ensure that no more Palestinian children like Hassan and Hamza are gunned down and killed by Israeli snipers who are able to do so safe in the knowledge that their disgraceful deeds will have no significant consequences for themselves or their country. The EU document Israel’s crimes; now it must do something about them.