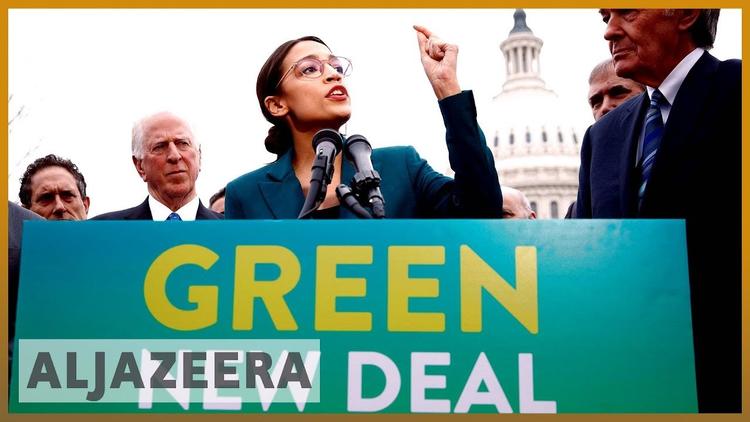 (China Dialogue) – The weeks after the Democratic Party won back control of the House of Representatives saw the longest government shutdown in US history, as President Trump unsuccessfully demanded money to pay for a wall on the Mexican border. Now that the shutdown is over, Democrats have started setting the agenda, and climate change is right at the top.

After delivering a storming victory in the midterm elections the new Speaker of the House, Democrat Nancy Pelosi, was probably not expecting to be greeted with protests. But that’s what immediately faced her. Hordes of young activists sat outside her office demanding action on climate change. Newly elected members from the left-wing of the party, led by Alexandria Ocasio-Cortez, increased the pressure, demanding that the party pursue a more radical agenda in line with the scale of the climate challenge and America’s responsibility to address it.

On February 7 they got their way. Ocasio-Cortez tabled a resolution calling for a Green New Deal, which, at the time of writing, has more than 60 co-sponsors in the House of Representatives and is backed by most Democrat presidential candidates, including Cory Booker, Kamala Harris and Elizabeth Warren.

Back on the table

Climate change has been off the table under Republican control of the House for the past eight years, so this has been a dramatic and unexpected change. Democrats are still a long way from being able to make laws – Republicans control the Senate and Donald Trump is still president – so the resolution is seen by many as symbolic, an opportunity for Democrats to make clear what they stand for. And the Green New Deal is an admirably clear articulation of a new climate agenda.

Those framing the Green New Deal take seriously the stark warnings set out by the Intergovernmental Panel on Climate Change and the recent National Climate Assessment. The resolution calls for a 10-year national mobilisation “on a scale not seen since World War II and the New Deal” with the aim of getting to net zero emissions of greenhouse gases. Renewable energy, sustainable infrastructure and clean public transport are at the heart of the plan.

The resolution avoids some of the more heated debates among activists and experts. There is no specific mention of nuclear energy, for example, only the aim to “meet 100% of the power demand in the United States through clean, renewable, and zero-emission energy sources.”

Public awareness of the Green New Deal is low. Before its launch, only 17% of Americans had heard of it. But support for its contents, at this early stage, is surprisingly high: 81% of polled voters said they support the proposal.

The resolution has sparked a fierce debate within the Democratic Party. Should the party be proposing such clear, radical ideas, in line with the scale of the problems the country faces? Or should it adopt a more incremental approach? And are big, simple ideas necessary to win elections? The Democrats have traditionally been cautious in their approach to climate, favouring incremental reforms, ideally with the backing of business. This approach has failed, been stymied or overturned by Republicans every time.

The Green New Deal is considerably more radical than the “Cap and Trade” bill which was passed by the House of Representatives before dying in the Senate in 2009, or President Obama’s subsequent Clean Power Plan. Both of these schemes had more modest targets, with significantly less government spending.

Ernie Moniz, energy secretary under former president Obama, who favours a more conciliatory approach, said, “It’s just impracticable… If we start putting out impracticable targets we may lose a lot of key constituencies that we need to bring along”.

Other critics of the plan point to different social policies it includes. Providing all members of society “with high-quality health care, affordable, safe and adequate housing, economic security” are laudable goals, but how will they be paid for? For her part, Speaker of the House Pelosi described it, somewhat dismissively, as the “green dream or whatever”.

Republicans have also sought to discredit the deal, deliberately mischaracterising its contents. President Trump sarcastically tweeted: “I think it is very important for the Democrats to press forward with their Green New Deal. It would be great for the so-called ‘Carbon Footprint’ to permanently eliminate all Planes, Cars, Cows, Oil, Gas & the Military – even if no other country would do the same. Brilliant!”

While in the Senate, Republicans moved to force an immediate vote on the issue, with the aim of forcing more moderate Democrats to either vote for it, or oppose parts of their own voter base, weakening their chances of winning subsequent elections. A small minority of Republicans see this as an opportunity to advance their own, moderate climate proposals, including a small carbon tax.

Wherever it leads, it’s clear that the Green New Deal has brought climate change to the front of the minds of voters and politicians. Fierce public fights within and between political parties will now continue into the presidential campaign. In less than two months in office, Ocasio-Cortez has completely upended climate politics in the United States.

Tan Copsey is a Director at Climate Nexus, a strategic communications group dedicated to highlighting the impacts of climate change and clean energy solutions in the United States. Follow him on Twitter at @tancopsey