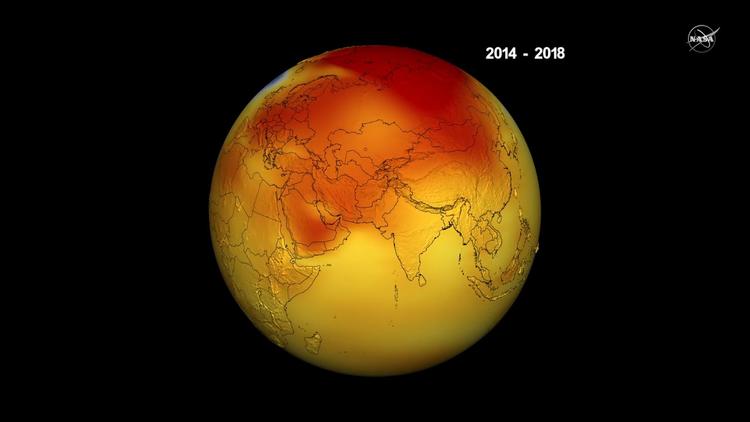 Ann Arbor (Informed Comment) – The National Space and Aeronautics Agency (NASA) and its sister agency NOAA report that the past 5 years are the hottest on record. World-wide temperature records began being kept from about 1880.

Global heating proceeds differently in each area of the globe. The real heat wave in comparative terms was in the arctic last year. The lower 48 in the US experienced their 14th hottest year on record.

The world is on average one degree Fahrenheit (0.86 degrees C.) whotter than the 1951-1980 average. It is 2 degrees F. hotter than 1880. Obviously, the heating is accelerating at an alarming rate.

If we were smart, we’d pull out all the stops to halt burning of fossil fuels so as to limit further warming. The carbon dioxide human beings have already put into the atmosphere will go on making the earth hotter for a while. But we have a choice of whether it gets a degree hotter, or two degrees hotter, or 14 degrees hotter. If the average global temperature goes up 14 degrees, then some places that are now hospitable to human habitation will just become uninhabitable.

By the way, the increases are much more dramatic than these percentages suggest. The oceans are cold, as are the poles and other areas of surviving glaciation. The increases are a global surface average. So in some places, a two degree average world increase actually means an 8 degree F. local increase.

Before human beings started going wild with burning fossil fuels after the invention of the steam engine in the 18th century, the main reason for fluctuations of CO2 was volcanic activity, which was intermittent and did not move the needle much in the past three million years.

Now human beings are driving these changes, and we may already have built 7 degree F. increase into the atmosphere by increasing CO2 concentrations to 410 ppm.

Human beings have only been around for about 200,000 years, so we are now messing with our environment in a truly insane way. We are on the verge of producing conditions that none of our ancestors ever had to deal with.