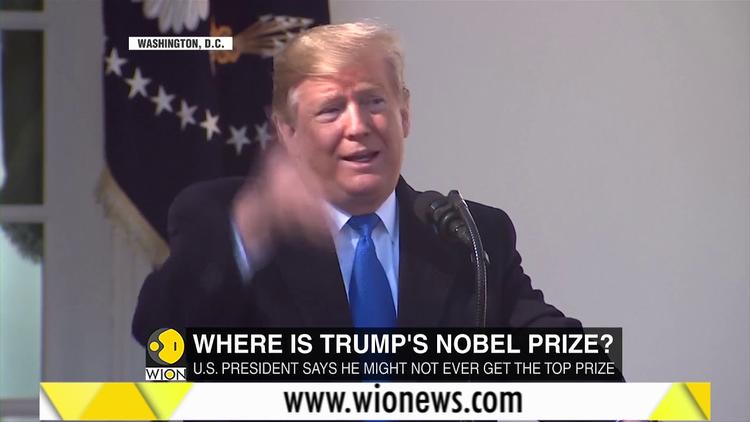 Ann Arbor (Informed Comment) – Rumors are swirling that the Trump administration, i.e. Donald Trump himself, requested from Japanese prime minister Shinzo Abe that he nominate Trump for the Nobel Peace Prize. Trump no doubt thinks to himself that Obama got this prize and it is completely unfair that Trump hasn’t been awarded it, especially since Trump is at least half American whereas Obama was Kenyan. (Yes, I know it doesn’t matter where you’re from, and also Obama is from Hawaii, I’m just trying to understand the squirrels running around in Trump’s brain case).

So here are some thoughts about why Trump does not deserve the Nobel Peace Prize:

1. The 2018 winners, Denis Mukwege and Nadia Mura won “for their efforts to end the use of sexual violence as a weapon of war and armed conflict.” Trump, in contrast, boasted of grabbing women’s private parts.

2. In 2017,the International Campaign to Abolish Nuclear Weapons”for its work to draw attention to the catastrophic humanitarian consequences of any use of nuclear weapons and for its ground-breaking efforts to achieve a treaty-based prohibition of such weapons.” In contrast, Trump has attempted to dismantle the 2015 joint Comprehensive Plan of Action with Iran, one of the more successful anti-proliferation treaties ever concluded. Moreover, Trump has urged Japan and South Korea to seek nuclear weapons. And he just rescinded the 1987 Intermediate-range Nuclear Forces treaty with Russia, likely kicking off a nuclear arms race.

3. In 2015, the Tunisian National Dialogue Quartet received the Peace Prize “for its decisive contribution to the building of a pluralistic democracy in Tunisia in the wake of the Jasmine Revolution of 2011.” In contrast, Trump has steadfastly backed military strong men who are crushing democracy.

4. In 2007, Al Gore shared the Peace Prize with the Intergovernmental Panel on Climate Change “for their efforts to build up and disseminate greater knowledge about man-made climate change, and to lay the foundations for the measures that are needed to counteract such change.” In contrast, Trump is a climate crisis denialist who has favored burning *more* coal and generally adopted policies guaranteed to put extra billions of tons of carbon dioxide into the atmosphere.

5. In 1993 Nelson Mandela and Frederik Willem de Klerk of South Africa won “for their work for the peaceful termination of the apartheid regime, and for laying the foundations for a new democratic South Africa.” In contrast, Trump’s racist policies are dividing America and his racist border policies have divided families.