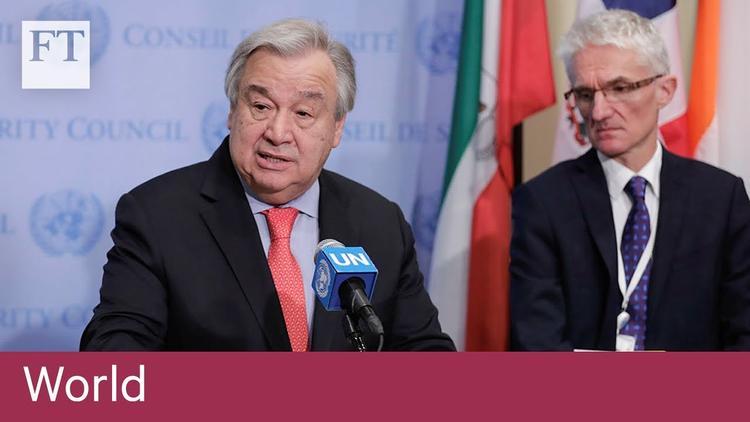 Ann Arbor (Informed Comment) – The Trump administration’s illegal and unilateral recognition of Israeli annexation of the Syrian Golan Heights is an unfortunate return to the international jungle of the 1930s and 1940s, when Hitler annexed the Sudetenland and Mussolini annexed Nice from France.

Trump’s policy is Nazi law, as so many of his policies are. His first wife Ivana maintained that Trump kept a copy of Hitler’s speeches on his bed stand. It was said as part of a nasty divorce. But it is, sadly, nevertheless plausible.

The United Nations charter was crafted after World War II in an attempt to create a more just world order. One of the things the UN sought to do was to make aggressive warfare illegal, and to make annexation of other countries’ territory equally illegal.

“All Members shall refrain in their international relations from the threat or use of force against the territorial integrity or political independence of any state, or in any other manner inconsistent with the Purposes of the United Nations.”

Note that although the article does forbid aggressive warfare, it also is concerned to maintain the territorial integrity of existing states. Indeed, the maintenance of that integrity and sovereignty is considered key to the UN goal of preventing further world wars. Trump and Netanyahu have violated that principle of maintaining the territorial integrity of nation states, and it will certainly lead if not to war (Syria is weak) then to violence of some sort eventually.

Israel and the United States are both signatories of the UN Charter. Their problem is that the US wants Israel to be able to act with impunity in the Middle East, since it is a sort of aircraft carrier for US hegemony in the oil-rich region. The US might tsk tsk when Israel occupies 10% of Lebanon, as it did in 1982-2000, but Washington never does anything practical to rein in Israeli expansionism. Only when the other side has a powerful military (Egypt) or an effective guerrilla resistance (Hizbullah in Lebanon) do the Israelis relinquish any territory they have gobbled up.

So the Israelis keep making up exceptions to international law in an attempt to retain the ability to act like the aggressor states in WW II.

The argument being trotted out with regard to the Golan is that Israel conquered it as part of a defensive war, and annexing neighbors’ territory is all right if it is done after an aggressive war. They point to adjustments against Germany after World War II. This is a bad faith argument, since the UN Charter was thereafter established to handle these issues and it invests the UN Security Council with the authority to make these decisions, not individual member states.

We know what the UN Security Council, including the US government, thinks of the Israeli annexation of Golan:

Having considered the letter of 14 December 1981 from the Permanent Representative of the Syrian Arab Republic contained in document S/14791,

Reaffirming that the acquisition of territory by force is inadmissible, in accordance with the Charter of the

1. Decides that the Israeli decision to impose its laws, jurisdiction and administration in the occupied Syrian
Golan Heights is null and void and without international legal effect;

2. Demands that Israel, the occupying Power, should rescind forthwith its decision;

3. Determines that all the provisions of the Geneva Convention relative to the Protection of Civilian Persons in Time of War, of 12 August 1949,” continue to apply to the Syrian territory occupied by Israel since June 1967;

4. Requests the Secretary-General to report to the Security Council on the implementation of the present resolution within two weeks and decides that, in the event of non-compliance by Israel, the Council would meet urgently, and not later than 5 January 1982, to consider taking appropriate measures in accordance with the Charter of the United Nations.

Adopted unanimously at the 2319th meeting. “

The Trump and Netanyahu regimes may not unilaterally violate a UNSC resolution. One of the bases given by the Bush administration for attacking Iraq in 2003 was that Iraq was in violation of UNSC resolutions.(The UNSC did not agree). So should someone now invade the US and Israel because they are defying the UNSC on Golan?

Moreover, the war Moshe Dayyan and other hawks launched in 1967 was not a defensive war but a preemptive one. Israel fired the first shots and went on the attack. Gen. Yitzhak Rabin thought it was a very bad idea and nearly had a nervous breakdown over it according to his memoirs.

Egypt was not in a position to go to war because 100,000 of its best troops were bogged down in Yemen and the Soviets had warned Gamal Abdel Nasser that if he fired the first shot he would have to fight alone, but if he refrained from doing so and Israel committed aggression, the Soviets would support him. Abdel Nasser’s hands were tied, and Dayyan took advantage of his heated rhetoric to go to war when Egypt was in no position to do so.

Anyway, there is no mechanism for adjudicating defensive versus aggressive war, except possibly the UN Security Council, so we are back to square one.

By this new far-right Israeli and Trumpian principle, Iraq would have a claim on US territory– say, Alabama, given that the Bush regime launched an illegal war of aggression on Iraq in 2003 with no UN Security Council authorization and no element of self-defense.

Egypt would have a legitimate claim on the Negev, since Israel attacked Egypt, along with France and Britain, in an aggressive war in 1956. President Ike Eisenhower recognized that Egypt was the victim in that war and made the aggressors withdraw.

The fascist Likud principle of annexation would throw the whole world into war yet again. Iran would have a claim on parts of Iraq, given that Saddam Hussein launched a war of aggression on Iran in 1980.

Kuwait would have a claim on Basra, since Saddam Hussein invaded that country in 1990.

Yemen would have a claim on parts of Saudi Arabia, since the Saudis unilaterally attacked Yemen in 2015.

The wars would never stop, just as Israel’s wars never stop, because it keeps annexing the land of its neighbors. The horrid incubi Trump and Pompeo and Bolton are sowing dragon seeds to blight the lives of millions into the distant future.