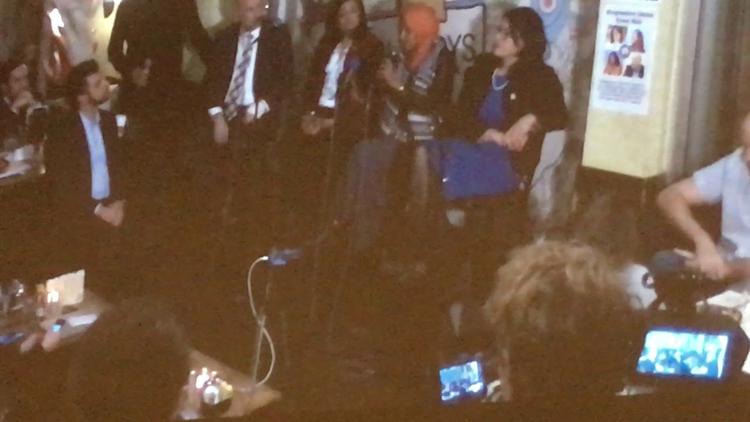 First-term Congresswoman Ilhan Omar refuses to back down on her criticism of the Washington Establishment for demanding that representatives “pledge allegiance” to Israel or risk being smeared as un-American.

But she is right. The Israel lobbies that direct campaign money to representatives and senators insist that Israeli policy of imposing Jim Crow discrimination on Palestinians in the Occupied Territories never be criticized on the floor of Congress. They also insist that the US give Israel, a relatively wealthy country, $3 billion in aid every year on top of other extensive grants and perquisites, despite what the UN says are war crimes committed on a daily or weekly basis.

Omar doesn’t usually get a full hearing, so please watch the video appended below.

The hypocrisy of her critics on this issue is breathtaking. For nearly a year, Israeli snipers have shot down unarmed, unthreatening peaceful protesters on the Gaza side of the border, which is just murder. Israeli soldiers have killed hundreds this way, including small children, women, medics and journalists, and wounded thousands more with live ammo or military grade tear gas.

To tell you the truth, even I am shocked at the lack of consequences for Israel’s far far right Likud government, which just formed an electoral alliance with a notorious terrorist group, affiliates of which have been branded terrorists by the US government.

If a country with no US domestic constituency behaved this way, the Washington elite would be clamoring to invade it and take over its natural resources.

Not only are no sanctions being placed on Israel for these naked war crimes but the lawmakers in the US are willing to take large scissors to the US Constitution on behalf of the Likud Party, protecting it from any civil society attempt to hold it accountable.

Ben Kesslen at NBC News reports that the University of Arkansas-Pulaski Technical College cancelled their ads with Little Rock’s Arkansas Times because owner Alan Leveritt won’t sign a pledge that his business does not boycott Israel. Leveritt doesn’t boycott Israel, but he considers a state law passed by Arkansas and 27 other states to be unconstitutional and he would rather risk his business than surrender his First Amendment rights.

Back in the Civil Rights movement of the 1960s and early 1970s, the question came up of whether African-Americans were allowed to launch boycott campaigns targeting businesses that discriminated against persons of color. This question was settled by the Supreme Court in 1982 in NAACP v. Claiborne Hardware, which found that nonviolent boycotting of a commercial establishment is protected speech under the First Amendment.

The extent is fully revealed, to which the Israel lobbies are determined to gut the US Constitution in order to protect Israel from the consequences of its ongoing war crimes and crimes against humanity practiced against stateless Palestinians under its jackboot in Kesslen’s fine article. The Arkansas Republican Party and the Louis Brandeis Center both urge a betrayal of the Constitution.

Note that the practical effect of the Arkansas law may well be to bankrupt one of the few left-leaning newspapers in the state, pushing it even further to the right, so that the far right wing Likud Party in Israel is now shaping the press landscape in middle America. (The anti-BDS legislation is a project of the Israeli government, which behind the scenes coordinates with the powerful indigenous Israel lobbies of the US Jewish community, who are often allied with the Christian Zionists of the Evangelical movement, to lobby politicians).

In other states, the judiciary has been willing to issue an injunction against the legislation denying state contracts to practitioners of Boycott, Divestment and Sanctions (BDS) toward Israel, what with such legislation being baldly unconstitutional and all. But Arkansas is so corrupt that even its judges line up against the First Amendment, and not for the first time.

Once the Arkansas law goes up to a Federal district court, it will almost certainly be struck down. But note that Mitch McConnell has been packing the Federal judiciary with the sort of judges who might well not defend the first amendment, and over time there is a danger that substantial parts of the court system will be as corrupt as that in Arkansas.