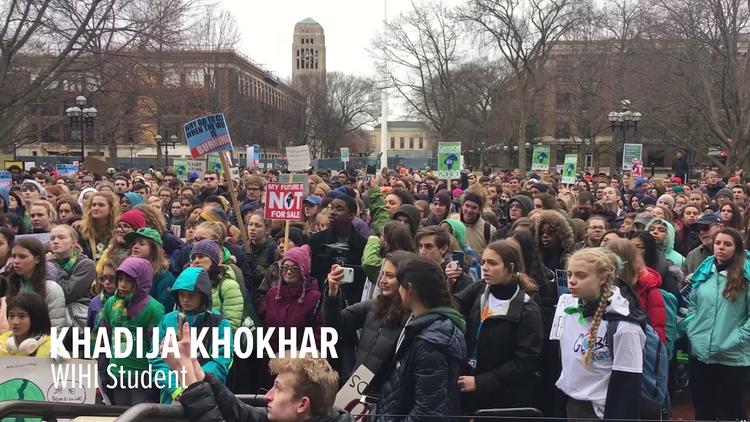 As part of one of the largest environmental protests ever seen, over a million young people went on strike on Friday March 15 2019, calling for more ambitious action on climate change. Inspired by Greta Thunberg, a Swedish school girl who protested outside the Swedish parliament every Friday throughout 2018, young people in over 100 countries left their classrooms and took to the streets.

The previous #YouthStrike4Climate on February 15 2019 mobilised over 10,000 young people in over 40 locations in the UK alone. Their marches, chants and signs captured attention and prompted debates regarding the motivations and methods of young strikers. Many were criticised by those in the government and the media for simply wanting an opportunity to miss school.

My PhD research explores youth participation in climate change governance, focusing on the UN climate negotiations. Between 2015 and 2018 I closely studied the Youth Climate Coalition (UKYCC) – a UK based, voluntary, youth-led group of 18 to 29 year olds – which attends the international negotiations and coordinates local and national climate change campaigns.

My research shows that young people are mobilised by concern for people and wildlife, fears for the future and anger that climate action is neither sufficiently rapid nor ambitious. Young people need to feel as though they are “doing something” about climate change while politicians dither and scientists release increasingly alarming projections of future climate conditions.

The strikes have helped young activists find like-minded peers and new opportunities to engage. They articulate a collective youth voice, wielding the moral power of young people – a group which society agrees it is supposed to protect. All the same, there are threats to sustaining the movement’s momentum which need to be recognised now.

The paternalism that gives youth a moral platform is a double-edged sword. Patronising responses from adults in positions of authority, from head teachers to the prime minister, dismiss their scientifically informed concerns and attack the messenger, rather than dealing with the message itself.

You’re too young to understand the complexity of this.

You’ll grow out of these beliefs.

You just want to skip school.

Stay in school and wait your turn to make a difference.

This frightens some children and young people into silence, but doesn’t address the factors which mobilised them in the first place. These threats are also largely unfounded.

To any young person reading this, I want to reassure you, as a university educator, that critical thinking, proactivity and an interest in current affairs are qualities that universities encourage. Over 200 academics signed this open letter – myself included – showing our support for the school strikes.

Growing up is inevitable, but it can cause problems for youth movements. As young people gain experience of climate action and expand their professional networks, they “grow out of” being able to represent youth, often getting jobs to advocate for other groups or causes. While this can be positive for individuals, institutional memory is lost when experienced advocates move on to do other things. This puts youth at a disadvantage in relation to other groups who are better resourced and don’t have a “time limit” in how long they can represent their cause.

Well-established youth organisations, such as Guides and Scouts, whom I have worked with in the past, can use their large networks and professional experience to sustain youth advocacy on climate change, though they lack the resources to do so alone. It would also help for other campaigners to show solidarity with the young strikers, and to recognise youth as an important group in climate change debates. This will give people more opportunity to keep supporting the youth climate movement as they get older.

Researching the same group of young people for three years, I have identified a shift in their attitudes over time. As young participants become more involved in the movement, they encounter different types of injustices voiced by other groups. They hear activists sharing stories of the devastating climate impacts already experienced by communities, in places where sea level rise is inundating homes and droughts are killing livestock and causing starvation.

The climate justice movement emphasises how climate change exacerbates racial and economic inequality but frequently overlooks the ways these inequalities intersect with age-based disadvantages.
Forgetting that frontline communities contain young people, youth movements in developed countries like the UK begin to question the validity of their intergenerational injustice claims.

Many feel ashamed for having claimed vulnerability, given their relatively privileged position. Over time, they lose faith in their right to be heard. It would strengthen the entire climate movement if other climate justice campaigners more vocally acknowledged young people as a vulnerable group and shared their platform so that these important voices could better amplify one another.

With my own platform, I would like to say this to the thousands who went on strike. You matter. You have a right to be heard and you shouldn’t be embarrassed to speak out. Have confidence in your message, engage with others but stay true to your principles. Stick together and remember that even when you leave school and enter work – you’re never too old to be a youth advocate.