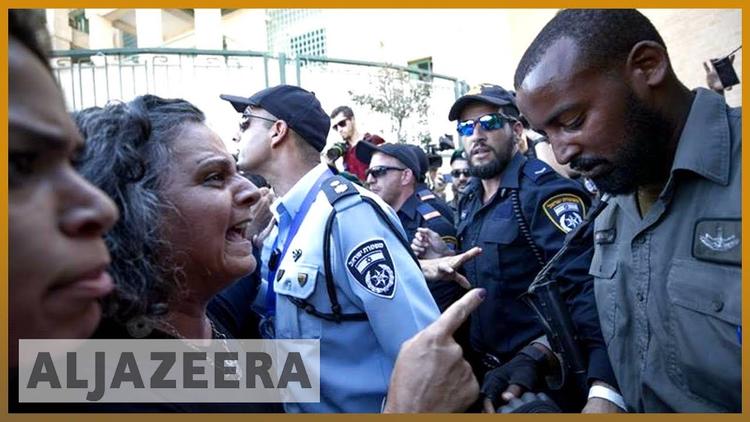 Ann Arbor (Informed Comment) – A Gallup poll has found that for the first time in many years, 50% of Americans favor the establishment of a Palestinian state in Gaza and the West Bank.

I’m not sure what the other 50% think the Palestinians should do. Just stay stateless and without the rights of citizenship? You do understand that they live under foreign military occupation, right? That in the West Bank if they have a dispute, they have to go to an Israeli court; that Israeli squatters can come in and steal their property and water at will; that if you don’t have citizenship in a state, it is sort of like being in jail permanently.

What is remarkable is that the public has swung toward a Palestinian state even though it is not the project of the current president. Earlier high points in this position were reached when Bush and Obama, respectively, were trying to achieve a peace accord.

I wonder if the vocalness of Representatives Ilhan Omar and Rashida Tlaib on this issue has played a role. The poll was taken Feb. 1-10 of this year.

I looked at the more granular data provided by Gallup and was struck by the demographic differences.

So 55% of non-whites supported a Palestinian state, an 8-point spread from white support (47%).

Likewise, 53% of the 18-34 demographic supports a Palestinian state, whereas only 47% of the elderly do.

62% of the college educated supported it, but only 44% of those without a BA supported it.

While people change their minds on things as they age, it is possible that we are seeing a sea change. As the more pro-Palestinian youth get into positions of power and as the country becomes less “white,” we could see a big change in public opinion on this issue.

The cruelty of Israeli occupation and Apartheid is also having an impact, especially, apparently, among younger Americans who have always lived with Israeli military superiority over its neighbors, and among persons of color who can identify with the occupied Palestinians.

I think that the public sentiment in favor of Palestinian statehood would be much stronger if US mass media, such as cable news, actually covered the violence and aggression of the Israeli squatters in the West Bank, which is a daily occurrence from which the US public is shielded by pro-Israel US media. There is a low-intensity conflict going on daily in the West Bank but it isn’t covered for the most part.

Another finding of the poll is that only about a third of Americans think the Palestine issue affects their own security. They aren’t paying much attention. The Israeli occupation of Jerusalem was given by Osama Bin Laden as one reason to attack the United States. And if the Israeli lunatic fringe tears down the Aqsa Mosque in Jerusalem, as it wants to, the reverberations among 1.8 billion Muslims will be severe. Very severe.