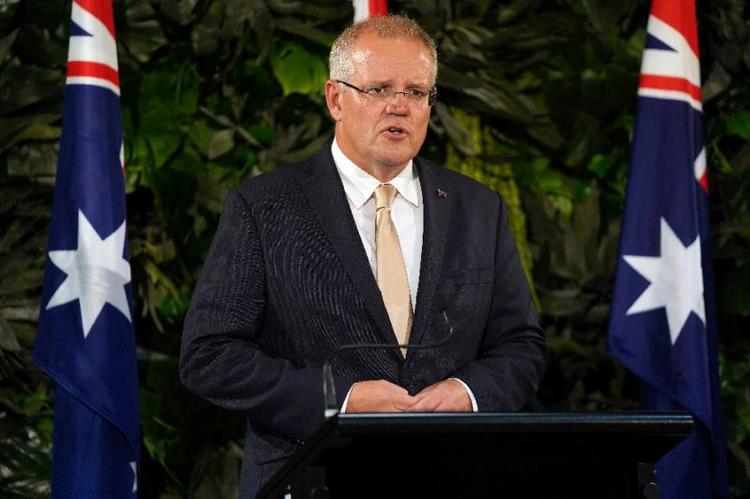 Australian Prime Minister Scott Morrison condemned “reckless” and “highly offensive” comments made by President Recep Tayyip Erdogan in the wake of the Christchurch massacre, warning he would consider “all options” in reviewing ties.

On the campaign trail, the Turkish leader has used video footage of the terror attack that killed 50 people and painted it as part of an assault on Turkey and Islam.

He has also warned anti-Muslim Australians — like the suspected gunman — would be “sent back in coffins” like their grandfathers at Gallipoli, which was the scene of a blood-drenched WWI battle.

“Remarks have been made by the Turkish President Erdogan that I consider highly offensive to Australians and highly reckless in this very sensitive environment,” Morrison said after summoning the Turkish ambassador and dismissing the “excuses” offered.

“I am expecting, and I have asked, for these comments to be clarified, to be withdrawn,” Morrison, who also faces an election challenge in the coming weeks.

“I’ve asked for these comments, particularly their reporting of the misrepresented position of Australia on Turkish television, the state-sponsored broadcaster, to be taken down and I expect that to occur.”

He described claims about Australia and New Zealand’s response to the white supremacist attack as “vile.”

New Zealand Prime Minister Jacinda Ardern refused to be drawn on Erdogan’s comments, but said her deputy would be going to Turkey to “set the record straight.”

Morrison said Australians travelling to Turkey should exercise common sense and cautioned that travel advice for Turkey was under review.

“I will wait to see what the response is from the Turkish government before taking further action, but I can tell you that all options are on the table,” Morrison said.

In fiery remarks, Morrison accused Erdogan of betraying the promise of Mustafa Kemal Ataturk — the father of the modern state and a revered figure in Turkey — to forge peace between the two countries.

A memorial at the battlefield carries Ataturk’s words: “There is no difference between the Johnnies and the Mehmets… after having lost their lives on this land they have become our sons as well.”

“Ataturk sought to transform his country into a modern nation and, an embracing nation, and I think these comments are at odds with that spirit,” Morrison said.

Erdogan had already been sharply rebuked by New Zealand for his comments and for using gruesome video shot by the Christchurch mosque gunman as an election campaign prop.

New Zealand’s Deputy Prime Minister Winston Peters protested on Monday that such politicisation of the massacre “imperils the future and safety of the New Zealand people and our people abroad, and it’s totally unfair”.

Peters announced on Tuesday that he would be travelling to Turkey this week at Istanbul’s request to attend a special meeting of the Organisation of Islamic Cooperation.

Three Turkish nationals were wounded in the rampage that killed 50 worshippers at two mosques in the southern New Zealand city of Christchurch on Friday.

The accused gunman, a self-avowed white supremacist from Australia, live-streamed much of the attack and spread a manifesto on social media claiming it was a strike against Muslim “invaders”.

The manifesto references Turkey and the minarets of Istanbul’s famed Hagia Sophia, now a museum, that was once a church before becoming a mosque during the Ottoman empire.

“This is not an isolated event, it is something more organised,” he said during a campaign event on Monday in Canakkale in western Turkey.

Erdogan did not project the video at the Monday event.