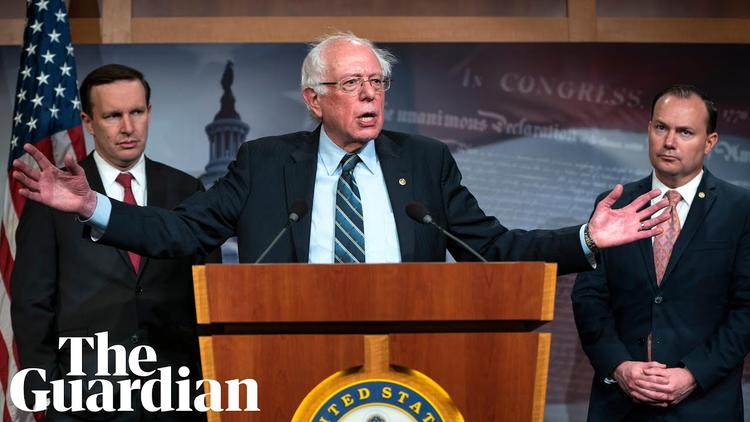 The US Senate voted 54 to 46 to invoke the 1973 War Powers Act and to end US support for the Saudi-led war on Yemen.

The Yemen War has involved extensive war crimes, in which the US is complicit. Tens of thousands of people have been killed since the Saudis launched the war in spring of 2015. Of the 29 million population, 16 million are food insecure, a technical term that means that while they are not starving, they are one setback away from starving. Thousands of children have died of malnutrition because the war interrupted farming or food distribution. One of the contemporary world’s worst cholera outbreaks resulted from the disruptions of the war (mainly from lack of water purification), with a million persons having fallen ill. Most survived, with babies and toddlers most at risk of being killed by this disease.

While the horrors of the Yemen War impelled some of the senators to act, others have been disturbed by the ghoulish murder by high Saudi authorities of the Washington Post columnist Jamal Khashoggi on October 2 of last year in the Saudi consulate in Istanbul.

“Today, in an historic vote, the United States Senate sent a very important message. We told the world that we will not continue to support Saudi Arabia in causing the worst humanitarian disaster on the planet, where 85,000 children have already starved and where millions are facing imminent famine and death. Today we said that we have to end that war. We have to help the people of Yemen with food and with humanitarian supplies, not with more bombs.

“Just as importantly, what the Senate did today in a bipartisan way is to reassert the constitutional authority of the United States Congress on issues of war. I hope my colleagues in the House will move quickly, so that the Congress can speak as one in telling the president that U.S. support for the war in Yemen must end.”

The Constitution says of Congress that it shall have the power

“To declare War, grant Letters of Marque and Reprisal, and make Rules concerning Captures on Land and Water…”

But the growing imperial presidency has led to the Executive branch usurping that authority with undeclared “police actions.” Despite the US at one point having 500,000 troops fighting in Vietnam, there was never a formal declaration of war. The 2001 congressional authorization for the use of military force (AUMF) that underpins most of the military conflicts in which the US is now involved actually only authorizes fighting the al-Qaeda operatives behind 9/11, but keeps being stretched to cover groups, many of whose members weren’t born on 9/11.

As Sanders implied, Wednesday’s vote is historic in representing an attempt by the legislature to recover its historic and constitutional authority over war from an increasingly out of control presidency. The House of Representatives is thought likely to pass the resolution, as well.

Trump has already indicated, however, that he will veto the measure, and it is unlikely that there are the votes in either chamber of Congress to override his veto, which requires a two-thirds supermajority.

The US sells the Saudis and the UAE the weapons they use in their indiscriminate bombing of Yemeni civilians, and it is not impossible that politicians in the back pocket of the US arms industry are the major force behind keeping the war going.

The Obama administration supported the Saudi attack on Yemen in spring of 2015, for reasons I have never understood. Some analysts have speculated that the Obama team wanted to mollify the Saudis, who were in a snit that the US was negotiating the nuclear deal with Iran.

The Saudis and the United Arab Emirates were furious with Obama. His mild support for their war on Yemen did not actually mollify them. They appear at that point to have begun looking for a way to put somebody friendlier into office as US president. Those who focus too much on the Russian role in electing Trump risk overlooking the key role of the Gulf.

Yemen joined in the 2011 “Arab Spring” youth revolts, overthrowing long-time dictator Ali Abdullah Salih. By autumn 2014, however, the resulting fragile political situation allowed the Helpers of God (Houthi) movement to take over Sana’a, with Salih’s behind-the-scenes help. By early 2015 they had deposed Salih’s successor, Abd-Rabbo Mansour Hadi and then marched down to take the port of Aden. The Houthis spring from the Zaydi branch of Shiite Islam, which is very different from what is practiced in Iraq and Iran (it does not have ayatollahs).

The Saudis nevertheless interpreted the rise of the Houthis as a take-over of Yemen by Iran. While Iran may have provided a little money and materiel, actually it does not have a very good way to intervene extensively in Yemen and the Iranian role has been vastly exaggerated. The Houthis are an indigenous Yemeni movement protesting increasing Saudi inroads in that country and reacting against missionizing by the Saudi hard line version of the Wahhabi form of Islam, which despises Shiism.

The Saudis and the UAE launched, with Moroccan and Jordanian help, an air war on the Houthi guerrilla movement. Although allying with troops loyal to Mansour Hadi and bringing in mercenaries from the Janjaweed in Sudan allowed the attackers to push the Houthis north out of Aden, it has not been able to overthrow them.

The United States military gives this air war logistical support, including mid-air refueling, and helps choose targets for the Saudis, using American satellite surveillance and other high tech tools. US officers have complained that they have sometimes urged that civilian infrastructure such as ports and bridges not be hit in order to avoid placing civilians at risk of starvation, but that the Saudis paid no attention and hit those targets anyway.

Senate majority leader Mitch McConnell said with his usual slimy cynicism that he opposed the Senate measure on the grounds that it would make it more difficult for the US to halt the war in Yemen. McConnell had both houses of Congress for years until last November and has done nothing, zilch, nada, zero to end the Yemen War, nor is there any prospect of his doing so.

Guardian News: “US senate defies Trump to vote to end support for Saudi-led war in Yemen”