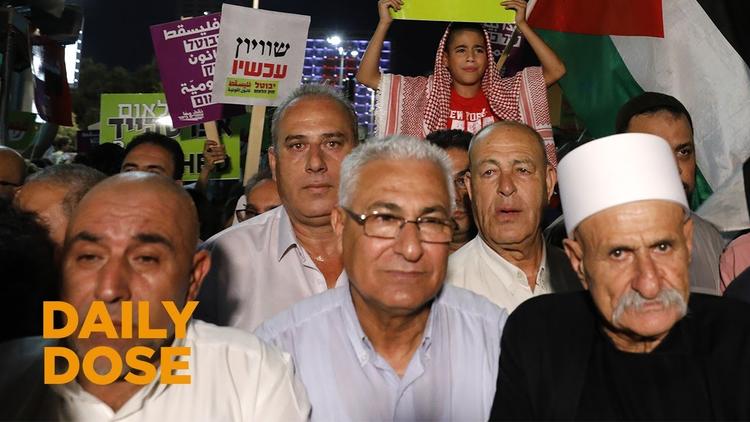 Israeli-Arab MK Ahmad Tibi has slammed the Likud party’s use of his name in its new slogan, accusing Israeli Prime Minister Benjamin Netanyahu of incitement against the country’s Palestinian citizens.

The new Likud slogan states that “It’s Either Bibi – or Tibi,” juxtaposing Netanyahu’s nickname with that of Tibi in a bid to garner support for his party. Netanyahu claims voting for Likud in the upcoming general election on 9 April is the only way to combat the rise of a “left-wing” government supported by the country’s predominantly-Arab parties.

The slogan has been likened to Netanyahu’s scaremongering ahead of the 2015 general election, during which he claimed that Israelis must vote for Likud to counter Palestinian citizens of Israel going to the polls “in droves”. The statement was thought to have secured Netanyahu his victory, though he was later lambasted for his tactics and forced to apologise for his statement.

Speaking in an interview with Israeli radio station Reshet Bet this morning, Tibi said of the new Likud statement: “This is the same lady in a new suit, a continuation of that terrible sentence by the Prime Minister – ‘The Arabs are streaming to the ballots’. This is incitement against the Arab community and an attempt to delegitimise our votes.”

Tibi continued: “The next government will be even worse than its predecessor. We want to topple Kahanism [referring to a recent Likud deal with ultra-right-wing Otzma Yehudit] the Right, and Netanyahu. We want to advance the Arab community.”

Tibi has been a vocal critic of Netanyahu and the Likud party, in January calling for a minority government to oust the incumbent prime minister at all costs. Tibi labelled Netanyahu’s government “catastrophic,” saying: “I will lead the attempt, through my party [Ta’al], to establish a political bloc to thwart a right-wing government in the upcoming elections.”

For the first time since Israel called an election in December, such a move looks possible given the formation of the Blue and White (Kahol Lavan) alliance. A merger of Benny Gantz’s Israel Resilience Party (Hosen L’Yisrael), Yair Lapid’s Yesh Atid party and Moshe Ya’alon’s Telem party, Blue and White is currently polling at 37 seats compared to Likud’s 29. If Gantz can convince other centre-left parties to join him, he could challenge the right-wing bloc and have the first shot at forming a government.

Gantz has however denied that he will work with Tibi, with the Jerusalem Post quoting the former army Chief of Staff as saying that such allegations are “not correct”. Gantz slammed the claim, saying: “Those who are nosediving in the polls are for some reason starting to make up stories that we [Blue and White] will go with Tibi.”

Despite his protestations, Gantz may need Tibi and Israel’s other Arab-dominated parties to form a coalition. The latest polls put the Hadash-Ta’al alliance, headed by Hadash leader Ayman Odeh and Tibi, at between seven and nine seats, making them the third or fourth largest party in the Knesset. The other Arab-dominated alliance, Ra’am-Balad, is currently polling at four or five seats, meaning they too will likely cross the four-seat minimum threshold needed to sit in the 120 seat Knesset and could join a left-wing bloc.

i24: “How Do Arab-Israelis See the Upcoming Israeli Elections?”