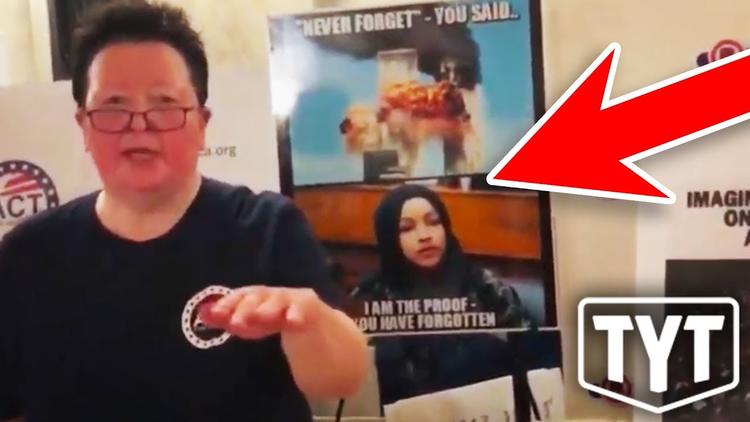 Ann Arbor (Informed Comment) – Republicans in the West Virginia state legislature held a “GOP takes the Rotunda” event at the state capitol on Friday. As part of this event they hung a poster of the 9/11 al-Qaeda attacks on the Twin Towers, labeled “Never Forget– You said.” Below it they placed a picture of Congresswoman Ilhan Omar with the caption “I AM PROOF THAT YOU HAVE FORGOTTEN.”

Rep. Omar is from a Somali refugee family that fled violence and extremism. She spent four years in a camp in Kenya before coming to the United States. She served in the Minnesota state legislature and was elected to Congress from Minneapolis last November. She is one of the two new congresswomen who are Muslim, but the only one to wear a head scarf.

The hanging of the poster outside the Rotunda provoked a commotion. Sergeant-at-Arms Ann Lieberman at some point exclaimed, “All Muslims are terrorists!”

The W. Virginia Democrats were outraged at her use of this hate speech, which resembles hateful assertions made by Islamophobic provocateurs such as Pamela Gellar.

According to WSAZ Charleston, Del. Michael Angelucci, D-Marion, said, “The sergeant of arms of this body had the nerve to say to us ‘all Muslims are terrorists’ that’s beyond shameful and that’s beyond freedom of speech.”

She resigned under this barrage of criticism.

Then it appears that the Republicans locked the door to the chamber so that Democrats could not enter (perhaps to protect the posters, to which Democrats were strenuously objecting.

Del. Mike Caputo, D-Marion, the minority whip, kicked the door in, but it seems to have swung around and injured a doorman, who was taken to hospital. Caputo was angry about the poster having been hung.

The West Virginia legislature’s House Rules Committee will met to consider whether Caputo should be censured for injuring the doorkeeper.

Democrats say they are fed up with hate speech at the state capitol. Del. Eric Porterfield, R-Mercer, recently made a comparison between the LGBTQ community and the Ku Klux Klan.

The Republican poster joins a long history of racist propaganda art. Nazi posters often showed Jews as a danger to the nation. For instance, one shows Stalin pulling his mask away to reveal a skullface with a Star of David on the forehead, implying that Communism was a Jewish plot that leads to the death of the German nation. Another showed a Jew as an embodiment of Satan. It wasn’t necessary for a German Jew to have done anything to be tarred by this brush, which sought to characterize all Jews as a Communist fifth column undermining the German society of the burghers.

All Muslims are not responsible for 9/11. In fact, almost no Muslims are responsible for it outside the 12-man al-Qaeda executive council and the 19 hijackers. There are about 3.5 million law-abiding Muslim-Americans, whose ranks include our physicians and engineers and scientists, such that they contribute crucially to society. They are every bit as loyal Americans as the West Virginia Republicans, and apparently many of them are much more loyal to the ideals of the constitution than that state’s GOP, who are willing to deny the rights enshrined in the Bill of Rights to Muslim-Americans.

Some African-American families came to the US as Muslims three hundred years ago and up until the slave trade was abolished. While most were stripped of their languages and religion by slaveholders, some later on recovered their ancestral religion. Some anti-Muslim legislators have been in this country a much shorter period of time and have contributed far less to our civilization.

To associate Rep. Omar with 9/11 in this way is absolutely execrable, and in a just world the Republican responsible for that poster would lose his job.