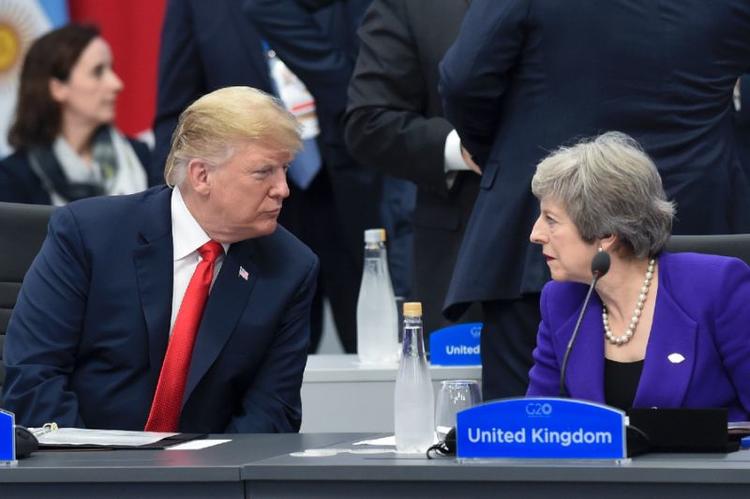 Washington, DC (AFP) – President Donald Trump is once again tearing up the diplomatic norm of treading lightly in allies’ domestic politics, with his team attacking Britain’s beleaguered leader over Brexit and irritating Germany.

Trump, who has slaughtered so many sacred cows in US politics, has shown no compunction over lambasting Prime Minister Theresa May’s handling of Britain’s most sensitive issue, even as she sought to build a warm relationship with him.

With Britain mired in crisis ahead of its scheduled March 29 departure from the European Union, Trump said that May “didn’t listen” to his negotiating suggestions and that he was “surprised to see how badly it has all gone.”

His son, Donald Trump Jr., went further in a biting op-ed in the eurosceptic Daily Telegraph newspaper, saying that “democracy in the UK is all but dead.”

The 41-year-old, seen as harboring future political ambitions, deplored that May “ignored advice from my father” and wrote: “Now, the clock has virtually run out and almost all is lost –- exactly as the European elites were hoping.”

National security advisor John Bolton, who advocated Brexit before taking a job at the White House, was more diplomatic during an appearance on Sky News but said that Trump sought a resolution that “allows the United States and Britain to come to trade deals again.”

Brexit advocates have held out the possibility of a trade agreement with the United States as proof that Britain would not be isolated by leaving the European Union.

Former president Barack Obama had also weighed in on Brexit, saying before the vote that Britain would be at the “back of the queue” for a trade deal if it left the European Union.

But senior Americans’ full-on, personal criticism of the leader of Britain, generally considered the closest US ally, would have been unthinkable until recently.

“Donald Trump Jr. telling Britain our democracy is dead. Is it a joke?” tweeted David Lammy, an MP from Britain’s opposition Labour Party.

Pointing to the younger Trump’s meeting during the 2016 campaign with a Russian lawyer promising dirt on rival Hillary Clinton — an encounter being probed by special counsel Robert Mueller — Lammy wrote of the president’s son: “You are no friend of Britain or democracy.”

“Both Trump & Brexit involved external manipulation. Both were victories for our enemies,” he tweeted, adding: “There is another way.” 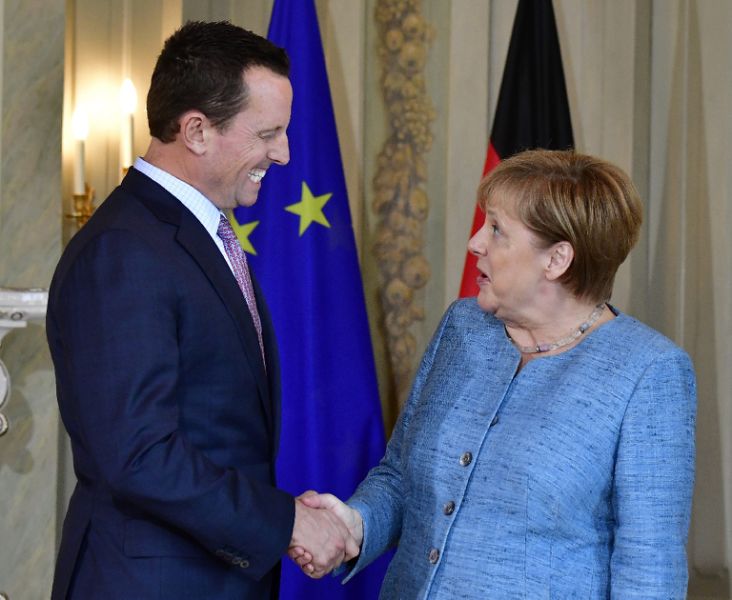 German Chancellor Angela Merkel shakes hands with US Ambassador Richard Grenell — who has increasingly rattled German lawmakers with his criticism — during a reception in July 2018 (AFP Photo/Tobias.”

Trump’s intervention on Brexit comes just as US Ambassador to Germany Richard Grenell, a rising star in Republican circles, has annoyed the fellow ally with his outspoken criticism on issues from Iran policy to usage of telecom equipment by China’s Huawei.

He drew particular fire after he reprimanded Germany for its budget planning in which defense spending would be well below the 2.0 percent of GDP targeted by NATO and decline by 2023.

“That the German government would even be considering reducing its already unacceptable commitments to military readiness is a worrisome signal to Germany’s 28 NATO allies,” Grenell said.

Chancellor Angela Merkel responded more diplomatically, saying Germany would “continue our effort” to raise defense spending “but not at the expense of development aid.”

Trump has been unflinching in his criticism of Merkel, especially her welcome of millions of refugees and migrants into Germany.

He has also increasingly attacked French President Emmanuel Macron over his climate and defense policies — stung after Macron, at last year’s commemorations for the end of World War I, criticized Trump’s brand of nationalist politics.

And Trump’s ambassador to The Netherlands, Peter Hoekstra, had an unwelcome first encounter with the Dutch media when he arrived last year after the former congressman made unsubstantiated claims that Muslim extremists had turned sections of the country into no-go zones.