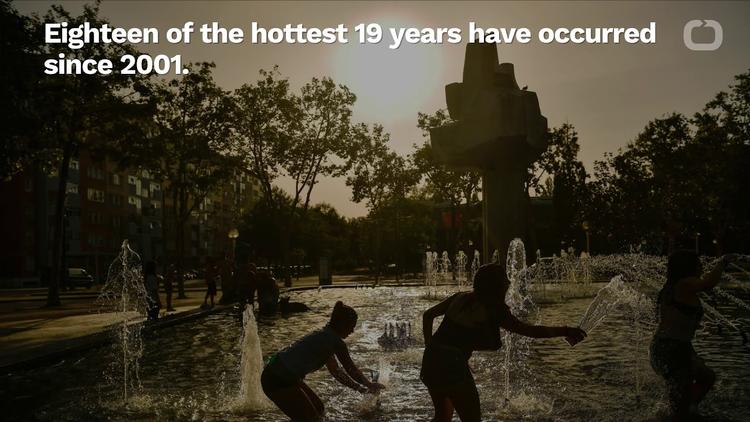 Ann Arbor (Informed Comment) – The world– you and I included– actually greatly increased the amount of carbon dioxide in the atmosphere, by 2.87 parts per million, raising the total to just about 410 ppm. So reports the National Oceanic and Atmospheric Administration. This was a significant increase, the fourth largest during the past 60 years of measurements. Worse, three of the four biggest jumps in CO2 have been produced during the past four years.

And, the world’s burning of *coal* actually increased. Coal is the dirtiest fossil fuel, the burning of which releases enormous amounts of dangerous carbon dioxide into the atmosphere.

*New* solar in many places is cheaper than existing coal. And yet world consumption of deadly coal increased.

The urgency of addressing the global climate emergency is increasingly being recognized by the public, despite the efforts of ExxonMobil, Saudi Arabia, the Koch brothers and other self-interested parties. But all the increasingly fevered rhetoric is not being accompanied by practical action to stop CO2, a dangerous greenhouse gas, from going into the atmosphere, heating it up as though you had set off a string of hydrogen bombs.

From about 10,000 years ago after the last ice age, there were typically between 260 and 280 parts per million of carbon dioxide in the atmosphere. This era is known as the Holocene. Then from about 1750, humankind starting turning the turbines of steam engines by burning, first wood, but then coal, in very large amounts. Then in the late 19th century the internal combustion engine was invented, which used petroleum to spark small explosions that drove pistons. By 1960 there were about 300 parts per million of CO2 up there. We had entered the Anthropocene, in which human beings are driving the climate. And driving it fast and furious.

Now it is 410 ppm. Never before in the whole history of the planet earth has so much CO2 been put into the atmosphere so quickly. CO2 did increase from time to time in the past, but over millions of years and because of volcanoes.

And here is the bad news. The last time it was 410 ppm was the middle Pliocene, stretching from 3.15 and 2.85 million years ago.

Temperatures in the middle Pliocene were on average 2-3 degrees C. (3.6 – 5.8 degrees F.) higher than today. The Arctic was 10 degrees C. hotter than today’s. Seas were roughly 90 feet higher. Some places now wet were desert-like. Here is what would happen to five cities under this scenario.

This 90 feet sea level rise is therefore almost certainly baked in and will occur, over the next few hundred years (oceans are huge and cold and take time to warm up). I wouldn’t buy real estate in Miami or lower Manhattan with an idea of passing it on to your grandchildren. Any beachfront property is ephemeral.

That we’re still seeing big spikes in new CO2 added to the atmosphere is extremely alarming. We should at least stabilize the 48 billion metric tons a year we are spewing up there, as though the sky were a big sewer. If we were not a stupid species we’d all drop everything and turn immediately to solar and wind for electricity, find a substitute for cement, and re-do our agriculture.

This is the task of states. They have the organization and money.

Individuals can only do so much to stop carbon dioxide emissions, the main cause of global heating. We exist inside infrastructures that shape our lives. Southeast Michigan where I live has no trains between its towns or even out to the airport, and you have to drive to get anywhere. The well off could buy a Chevy Bolt or Tesla 3 (electric cars) for $35,000, but most people can’t afford that. And unless you have your own solar panels, as I do, Michigan’s electricity is still pretty dirty–35% from coal and most of the rest natural gas. You still put out less CO2 in an electric car, but fueling from solar panels is the big climate payoff.

Why exactly are we doing this to ourselves?

We were told that capitalism is efficient and agile. But new wind and solar are now cheaper even than coal, and yet the US political elite is trying to keep coal going and is invested in natural gas big time.

Rather than being agile and efficient, capitalism is slow and lumbering and obstructionist and actually seems to prefer *not* to save money (the fuel for solar energy is free; oil is $59 a barrel). From a social historian’s point of view, I would say that capitalist theorists have no sociological imagination and can’t trace where the money goes and how it is used.

Wochit News: “2018 Was One Of The Warmest Years On Record”